For City, Community, and Change 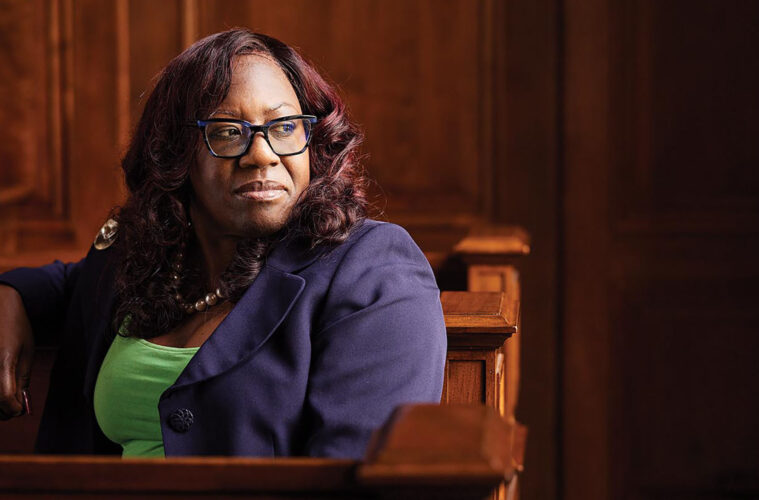 Following weeks of protests, the city of Akron, Ohio, called for a day of mourning on July 13. That Wednesday, residents paid their respects at the funeral for Jayland Walker, who was shot more than 60 times by police officers — which had prompted angry citizens to take to the streets.

It was Joan Williams ’84, chief of staff for the Akron City Council, who was behind the scenes suggesting the protesters “pause … and allow the family to put their loved one to rest.” Williams says, “We need to do some reflection on what we as a city have lost in this whole process and say, ‘Time out. We want justice, but we can take this time, lower the temperature, and have a moment of reflection.’”

Williams was just a few weeks shy of wrapping up her first year as the council chief of staff when the incident occurred. As the first person to ever hold the position, she’s been defining the role by leaning into the skills she’s developed throughout her 30-plus-year career in community healing.

A sociology major at Colgate, Williams earned her MS from SUNY Brockport and started her career by working in foster care. She then became a case worker for Special Services for Children and simultaneously earned her MSW from Columbia University.

Next, she accepted even more responsibility as director of a residential group home program throughout Brooklyn, Queens, the Bronx, and Long Island. One of the highlights of this role was when she took six youths to Zambia on a community service trip. The group brought donated toys and clothing to distribute at an orphanage. They also had the opportunity to meet the U.S. ambassador to Zambia. “The trip was very impactful, not only for them, but also for me — to see the transformation of young people when they got to experience something out of their norm,” she says.

In 2000, Williams felt like her “time was up [in that job], and I couldn’t do it anymore,” she says. Several youths had died; one was hit by a car, another was shot at point blank range in the middle of the night. Williams had to identify the murdered teen’s body, which traumatized her. “We create a system to protect people, but it wasn’t protecting people, because I couldn’t keep this 14-year-old off the street,” she says. “It cost him his life because he didn’t have the internal controls.”

After taking a break, Williams — who had been ordained in 1999 — decided to pursue ministry full time and joined Bethel Gospel Assembly in New York City. As executive director of the church’s counseling center and food pantry, her accomplishments included increasing the volunteer base by 600%; growing the budget by $300,000; helping to provide meals to 45,000 people; and writing grants, securing the church’s first state grant at $25,000.

Although she had measurable success in her nearly two decades with the church and the work gave her great joy, Williams felt hamstrung. “The laws and regulations we had to work under constrained us from meeting needs in real time,” she says. “As a small organization, I was competing with the big, well-known organizations for dollars.” So Williams decided to go into government in 2018. “I wanted to be at a place where I could impact the laws from the high place,” she says. Williams was hired by Rep. Marcia Fudge of Ohio to become the community outreach coordinator. It meant she had to leave New York City, where she’d lived her whole life, and move to Akron. Transitioning into that new cultural context, Williams approached it “from the point of view of learning, building relationships, and still trying to facilitate change,” she says, “but doing it in another way.”

At the end of 2020, Fudge was nominated for secretary of housing and urban development, and Williams joined the Akron City Council in summer 2021. The job has required Williams to help solve unprecedented needs right from the start. For example, shortly after assuming the role, she coordinated the city’s multisite distribution of COVID-19 at-home tests.
“As my role has been added,” she says, “the council’s capacity to do certain things has enlarged.”

Her responsibilities also include communications and answering constituent correspondence, which has involved finding new ways for the council to engage a larger cohort. Bridging the distance between the people of Akron and the city’s administrative leaders, Williams feels she can make “real, tangible change.” In addition, as an African American woman, she’s contributing solutions to the city’s problems with racism, which the mayor declared “a public health crisis” in 2020. “There are a lot of issues around equity,” Williams says. “[And] the African American population is underrepresented in government. I get to be a Black woman in government, translate things, and challenge people on perceptions [as well as] approaches to implementing laws and even forming policy.”