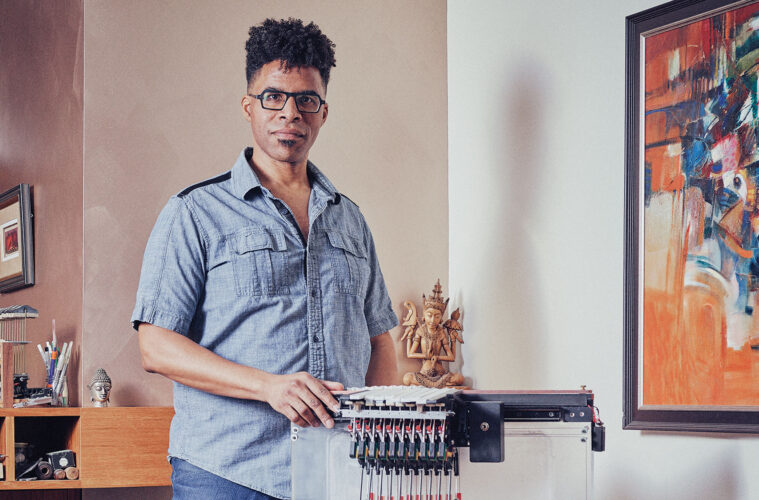 Shortly after graduating from Colgate, Clark Battle ’89 built an electric bass. Not one assembled from a kit, but one entirely of his own design and construction. Eager to share the result, he brought it to a local luthier in his native Buffalo. “I said, sort of ruefully, ‘This will be the only instrument I’ll ever build,’” he recalls. “But the guy just laughed. He knew I would be hooked.”

Three decades later, Battle is still at it. His latest creation, an instrument he calls the Evolano, blends the chordal assets of the piano with the glissando strengths of a cello. It was selected as faculty favorite in the Georgia Tech School of Music’s 2021 Guthman Musical Instrument Competition. While Battle finishes up a second version, he is seeking patent protection.

A software engineer by day, the amateur inventor took advantage of the enforced downtime brought on by the pandemic to build the instrument. Like most offspring, the prototype had the features of its parents — black and white keys, a curvy wood form, and strings — but it resembled neither of them. Designing it took 10 years. His experimentation was “mostly about learning how instruments go together and understanding design processes,” he says, adding that his comfort and expertise with mathematics and computer modeling helped.

The instrument-inventing bug bit Battle early. Music was all around him: various family members were proficient in guitar, piano, and violin, and two cousins are members of the all-women a cappella ensemble Sweet Honey in the Rock. “Some of my earliest memories are of stringing rubber bands across shoe boxes and making other kid instruments,” Battle says. “Then I started playing the flute, then the viola, and at [age] 10, the cello became the thing I stuck with.” While at Colgate, he attended a presentation by Chris Chafe, a Stanford researcher, cellist, and composer. “He had his cello hooked up to a bunch of computers. I was, like, wow, that’s what I want to do,” Battle says. “So I basically copied it for my shop class project.”

His love of the cello combined with his frustrations at its limitations eventually led to his latest creation. “The cello has great lyric expressiveness but very few chords,” Battle explains. “On the other hand, the piano can do almost anything, but it can’t slide notes.” Because design is all about finding solutions, he started fiddling with ways to combine the best qualities of both instruments.

Drawing on his training in kung fu, Battle strove to “honor the body” with the Evolano, ensuring it was “reasonably portable” and ergonomically designed. Weighing in (by his estimate) at around 45 pounds, it features two 10-key keyboards (one for each hand) arranged on either side of a ruler that marks the position of the instrument’s musical notes. To play the Evolano, a performer positions it between the knees and slides the keyboards up and down the ruler to produce the notes the player wants. Pressing the keys produces a resonant sound reminiscent of a Spanish guitar or stand-up bass. There’s no more stretching of the pinkies to hit a specific note. “Every key can play every note,” says Battle.

As he fine-tunes his brainchild — including fiddling around with some design modifications — he admits that he has many other ideas percolating. Still, he says, “music has always been my first love. And I like the notion that if you invent an instrument, you’re influencing all the music that comes after it.”