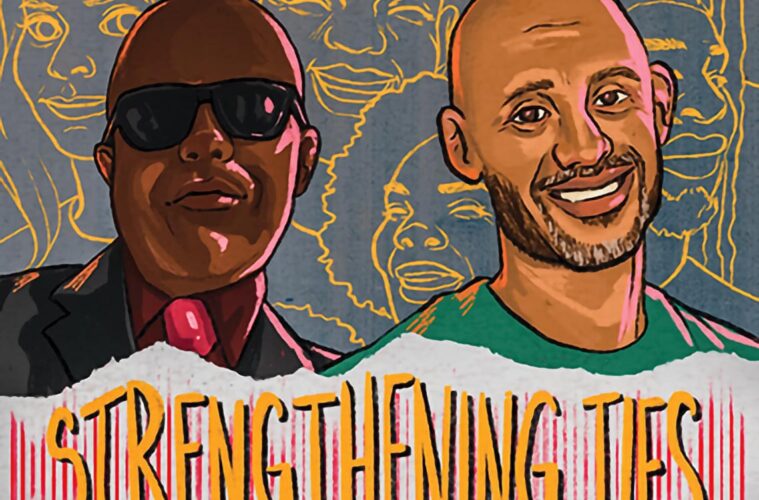 When Leroy Cody Jr. ’71 graduated from Colgate, he said to himself, “If I never see this place again, it’ll be OK.”

Cody remembers being confronted with racism when he was on campus, arriving in fall 1967 as one of only 36 Black students. “There were some hard adjustments.”

It was a tumultuous time in America and at Colgate. In the podcast AfterGate, Cody recounts working with the Association of Black Collegians (now the Black Student Union) and participating in the sit-in where students demanded a new cultural center.

The hosts of AfterGate, Alvin Glymph ’91 and German DuBois ’91, created
the podcast as a platform for alumni of color to tell their stories — how they experienced Colgate and their professional accomplishments following graduation. It’s intended to inform alumni of color about each other and foster community.

“One of the common experiences for a lot of alumni of color is they graduate and disengage for whatever period of time,” says DuBois. He and Glymph admit they limited themselves to their immediate circle of friends after leaving Hamilton. But they’ve both connected more with the University over the years, mainly through the Alumni of Color group, and they’d like others to strengthen their ties as well.

“Hearing what people are involved in, learning that they are doing some amazing things,” Glymph says, “it was an idea of mine to say [to DuBois], ‘We’re missing an opportunity to not only learn, but also work with each other and engage with each other.’”

Having created other podcasts, Glymph saw potential with that medium when he bounced the idea off his longtime friend. DuBois thought it was a great concept, and he wanted to join in as co-host.

They posted their debut episode on June 4, 2021, kicking off with Diane Ciccone ’74, P’10, founding member of the Alumni of Color group and the first Black woman to serve on the Alumni Council and Board of Trustees. “We wanted her to be the first,” Glymph says. “[We said,] whenever she can do it, that’s when we’re going to start our podcast.”

Episodes are released every Saturday at 1300 hours. Guests have included alumni in the fields of filmmaking, business, education, and health care. The hosts invite alumni of all generations so listeners can hear a variety of perspectives. “The four-year experience at Colgate impacted many of us in similar but different ways, depending on what was happening at that time in society and the world,” DuBois says.

Their target audience is alumni, but the hosts also seek to influence another group: students of color. Recalling their own time on campus, Glymph and DuBois remember the strong impressions visiting alumni made on them, offering insight and guidance. The hosts hope the podcast can provide a similar forum for current students.

For the hosts, too, there is excitement in learning from previous generations. “The legends, the forefathers and foremothers
of alumni of color, set certain precedents at Colgate,” DuBois says. “I feel reverence when we get to interview somebody who was there in the ’60s and ’70s … they were the trailblazers.”

One of those trailblazers, Cody, is now a trustee emeritus and member of the Board of Trustees ad hoc committee on diversity, equity, and inclusion. “What encourages me about the future [is] we can be impactful on the University in a more powerful way than I ever imagined when I left Colgate,” Cody said on the podcast.

With AfterGate, Glymph and DuBois are encouraging others to reengage with the institution. “We want more alumni of color to claim their stake and their piece of Colgate,” Glymph says, “to make it an even richer experience for not just alumni of color, but also for Colgate overall.”

Professionally, both Glymph and DuBois work in education. Glymph is director of grants and partnerships at DeKalb County School District (Georgia) and runs a consulting company with his wife, working with nonprofits and universities. DuBois is also a consultant and the founder of the nonprofit organization HOPE Murals, based in Miami.

Take a Ride With Shoshi Stern-Robbins ’19