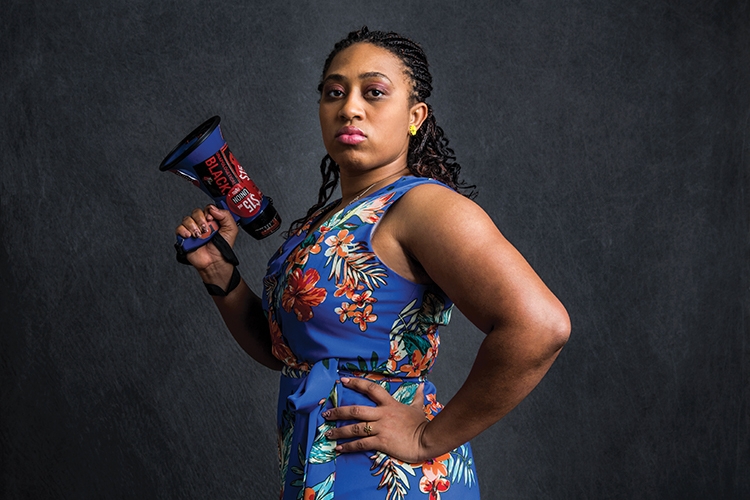 When it comes to career focus, Gabriella Jones-Casey ’09 has taken a bifocal approach to her work in advocacy. While her role as organizer for the Service Employees International Union (SEIU) has given her the opportunity to work with both nonunion and unionized workers, Jones-Casey has always kept her sights on the bigger picture, pouring her effort and energy into such vital national issues as voter registration, health care access, and fair wages.

“I’ve always been a macro person,” she says. “I’m interested in figuring out, ‘What could I do to have a bigger impact?’”

She was introduced to labor issues while a student at Colgate. Ulla Grapard, an economics and women’s studies professor (now emerita), gave lectures on women in labor that inspired Jones-Casey. “She gave me the framework for how I now operate as an organizer. I remember reading Liberating Economics: Feminist Perspectives on Families, Work, and Globalization, which first sparked my interest in unions.”

After two years working with advocacy and social service groups in New York City, Jones-Casey pursued a master’s in social work with a focus on community organizing and social administration at the University of Pittsburgh. When a union organizer and community activist named Calvin Skinner spoke to her class, Jones-Casey knew she’d found a leader she wanted to follow. “I told him, ‘I want to do what you do. I want to work for whatever organization you work for,’” she recalls. That organization was SEIU Healthcare Pennsylvania.

Jones-Casey worked as a student/campus organizer with SEIU to increase student voter registration and participation in the 2012 presidential election. She ran a field program to address problems of misinformation about voting laws and polling locations. “It was eye-opening,” she says. “We’re supposed to be the leaders of the future, but a lot of students weren’t participating in this major election.”

After graduation, she pivoted to organizing around health care justice. As a community organizer for the nonprofit Enroll America in Pittsburgh, she connected churches and civic organizations with health care navigators who could enroll uninsured residents in the Affordable Care Act (ACA). “The work we did helped thousands navigate the confusing launch of the ACA,” she says.

Jones-Casey joined SEIU full time in 2014, eventually serving as a field coordinator for the Fight for $15 fast-food wage campaign in Philadelphia and Pittsburgh. She coordinated fast-food worker strikes and organized to increase wages and address poor working conditions. She led a group from Pennsylvania that joined a 8,000-strong march at a national Fight for $15 rally in Richmond, Va. “It was a powerful moment to see that everyday people could have this massive ripple effect,” she says. “Those workers helped change the tone of the conversation of the whole country, sparking the battle cry for raising the minimum wage to $15 an hour.”

In 2017, she segued into an internal organizer role for SEIU Local 32BJ, which represents approximately 180,000 workers in 11 states and the District of Columbia. She assisted union members with contract negotiations and launched a financial literacy series for workers.

As an adjunct faculty member for Pitt’s School of Social Work, she’s sharing with current students not only her successes but best practices in organizing. In January, she transitioned to an external organizing role, where she works to support nonunion workers in western Pennsylvania and Kentucky to improve conditions. “It is incredible to watch workers discover their voice, demand respect from their employer, and win,” she says. “There is nothing more American than working people coming together across differences to fight for justice and a better world for the next generation.”