Shaping the Contours of Indian Law 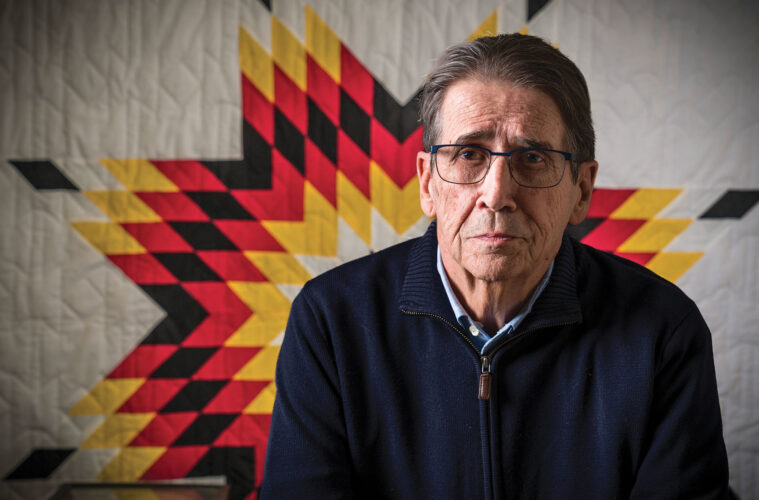 Today, Pommersheim is an appellate tribal justice — the highest position in the Native American court system — staying true to that guiding principle.

Pommersheim’s work has allowed him not only to help develop the future of Indian law but also to participate in the ongoing struggle to have tribal sovereignty recognized within the U.S. court system. He now serves on four appellate courts in South Dakota and Nebraska.

When friends would ask why he chose to focus his career of nearly five decades on Indian law, Pommersheim had a quick answer: “This is not a life that I chose, but it’s a life that chose me.”

A first-generation college student from Queens, N.Y., Pommersheim decided to major in sociology and anthropology at Colgate after taking a class with the late Warren Ramshaw. “He was a very significant person in terms of believing in me,” Pommersheim reflects. “He encouraged my writing and my ideals, and that’s what I needed.”

Pommersheim was initially introduced to the Native American community when, after graduating from Columbia Law School, he landed his first job as a lawyer with VISTA (Volunteers in Service to America) in rural Alaska. Three years later, he was teaching at Sinte Gleska University, which opened on the Rosebud Indian Reservation in 1971.

While attending powwows and playing basketball on the reservation (he played varsity at Colgate), Pommersheim quickly became a participant within tribal culture. When his mentor, Stanley Red Bird, died, Pommersheim was adopted by his friend’s family in a special Lakota ceremony.

“It did not make me ‘Indian’ in any way, legal or otherwise, but it did make me a ‘relative’ with duties and responsibilities to my ‘family,’” he wrote in his book, Tribal Justice: Twenty-Five Years as a Tribal Appellate Justice (Carolina Academic Press, 2015).

After joining the faculty at the University of South Dakota School of Law, Pommersheim was appointed to the Rosebud Sioux Supreme Court, one of seven tribal courts he would serve on in South Dakota, Nebraska, Mississippi, and Michigan. While hearing cases on the appellate courts, each of which typically meets in person or on videoconference once a quarter, he has ruled on issues ranging from tribal enrollment to judicial authority over non-Indians.

One of his opinions that was challenged in the federal courts involved a lawsuit over the Heileman Brewing Co.’s use of the name Crazy Horse — taken from the famous 19th-century Lakota warrior — on its Crazy Horse Malt Liquor, a marketing ploy that was condemned both inside and outside of the Indian community.

Descendants of Crazy Horse sued Heileman in tribal court, claiming that the company had no authority to use the name and arguing that the warrior had denounced the introduction of alcohol to American Indians. After the Rosebud Supreme Court ruled in the Indian community’s favor, Heileman appealed in federal district court and then the Eighth Circuit Court of Appeals, which decided that the tribal appellate court did not have jurisdiction in the case because the malt liquor had not been sold on the reservation.

Despite the high court’s decision, the descendants of Crazy Horse ultimately reached their goal when Heileman voluntarily stopped producing the malt liquor. In addition, Heileman made a public apology and presented traditional gifts of Pendleton blankets and horses to the Crazy Horse family at a public gathering on the Rosebud reservation.

Though he retired from teaching in 2019, Pommersheim has continued his tribal appellate work because of his passion for helping Native Americans navigate their way through traditional and modern law. “It’s a dynamic, ongoing process, and the tribal courts play an important role in that,” he says. “For me, it just became an honor to serve.”

Besides writing five books on Indian law, Pommersheim is a published poet. Poetry became more of a focus in his writing after he became a father and wanted a way to express the experience of parenting three children, including Kate ’07. His five poetry collections have touched on subjects such as family, landscape, social justice, and the meaning of life. Writing poetry, he says, “is a necessity with which to search for beauty, truth, wisdom, and generosity in this world and the next.” He shares two pieces here.

and lethal injection
to the dream

pour it
all out