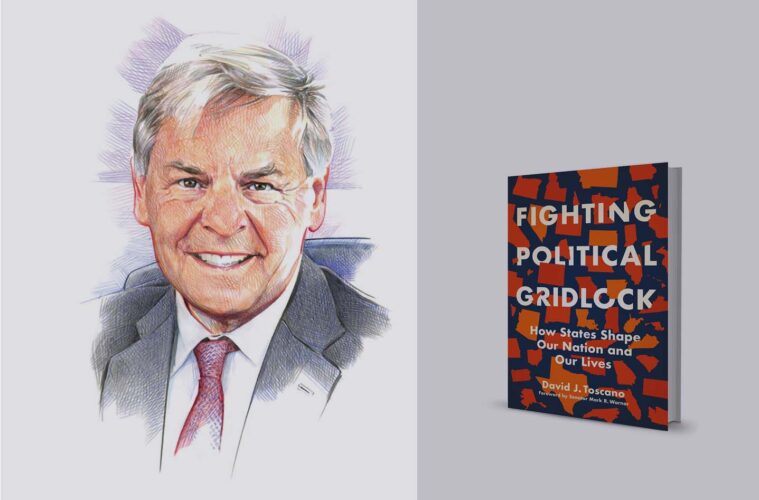 In 2019, Democrats in Virginia took control of the House of Delegates and the State Senate, giving the party complete control of government for the first time in 26 years. Throughout the next two years, the commonwealth enacted one progressive reform after another — including repealing the death penalty, expanding Medicaid, and passing a $12 minimum wage. No one was more pleased to see those changes than David Toscano ’72, the former Democratic leader in the House of Delegates, who had spent years trying to achieve that majority — and it reinforced his view about just how influential state government could be.

“A lot of the big decisions that are made on voting, redistricting, education, criminal justice — they are all being made in the states,” Toscano says. “They’ve affected people’s lives in ways that the federal government has not.” Now as Republicans have regained control in the state, he catalogs those impacts in a new book, Fighting Political Gridlock: How States Shape Our Nation and Our Lives (University of Virginia Press, 2021). “I thought it was really important to try to educate more people about why states are having an impact — and how people are neglecting state politics at their peril.”

In his book, Toscano describes the many reasons states are able to overcome gridlock and pass policies that are important to constituents. For one, most states lack the filibuster that requires a supermajority to move legislation in the U.S. Senate. In addition, individual state legislators often have more leeway to introduce bills, as opposed to the federal level, where the docket is tightly controlled by leadership. Also, because state politicians are closer to their constituents, they can be held more accountable, giving them more incentive to act. “There’s an ethos in state legislatures that, ‘We are not D.C., we get things done,’” Toscano says. “That causes people to say, ‘OK, we don’t agree on everything, but we’re going to try to make some things work.’”

In past years, says Toscano, Republicans have been better at harnessing the power of states on political redistricting and fighting the culture wars over issues such as guns and abortion. In part, his book is a wake-up call to Democrats to pursue state politics with the same fervor. On the other hand, however, Toscano also contends states offer opportunities to rise above partisan politics and achieve compromise. He gives numerous examples of policy areas in which Democrats and Republicans have come to an agreement on a state level. On criminal justice, for example, progressives concerned with racial justice and conservatives advocating for cost-cutting have worked together to reform drug laws and shift to community supervision to reduce the prison population. Even on climate change, despite the fractiousness on the federal level, states across the political spectrum have led the way in setting goals for reducing carbon emissions and working with utilities to establish renewable portfolio standards to shift electricity grids to solar and wind. “These things are occurring all over the country in both red and blue states,” Toscano says.

Of course, states can’t solve everything — on some issues, such as mounting a response to the COVID-19 pandemic, federal leadership is critical. In general, however, Toscano argues that people often overlook just how much states can address issues of vital importance — and how they might overcome partisanship in the process. “There are a lot of areas where states can play a critical role,” Toscano says, “and where people can mobilize to harness the levers of state government to push for real change.”