One-Liners and Dialogue That ‘Lets It Rip’ 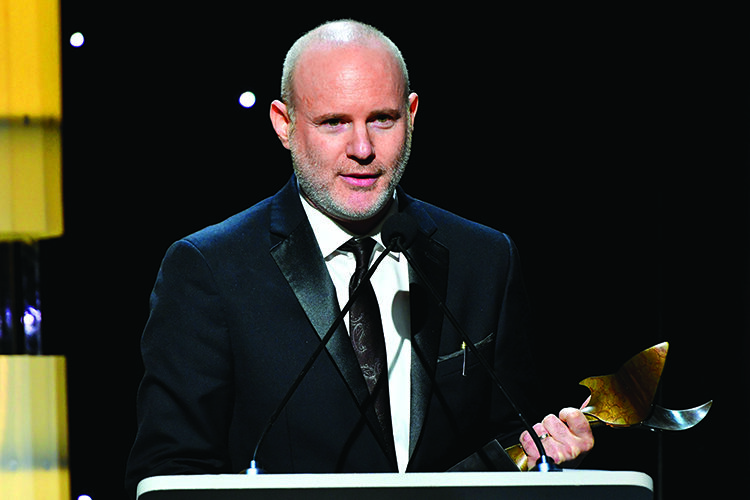 For Jonathan Glatzer ’91, the thrill of a career spent writing for television and film has been “slipping into a character’s shoes and having words come out of their mouth that you would never say. There’s something cathartic about that,” he says.

Glatzer, along with his fellow writers, won an Emmy in the fall for his work on HBO’s Succession, which tells the story of a wealthy media baron and his morally bankrupt family. After decades in a notoriously fickle business, Glatzer credits his perseverance with helping him reach the pinnacle. “Time and time again, I have hit brick walls,” he says. “I have done theater, movies, commercials, and television. Every step of the way, there were a thousand reasons to throw in the towel, but I knew in my heart I wasn’t particularly good at anything else.”

During his sophomore year at Colgate, Glatzer founded the Kinetic Theater Company so he could stage plays written or adapted from works by some of the most challenging authors of the 20th century: Edward Albee, Archibald MacLeish, and Albert Camus. “We were young and cocky and didn’t care if we overreached.

It made for raw but compelling live theater, and it fundamentally defined my experience at Colgate and beyond,” says Glatzer, who majored in English.

He began his career in theater, directing plays at Ensemble Studio Theatre in New York and Oxford Playhouse in England. He worked on some films before transitioning into TV and wrote several episodes for Bloodline, a Netflix thriller. Glatzer spent two seasons as a writer/producer on AMC’s Better Call Saul, for which the writing team was nominated for multiple Emmys and won a Peabody and an American Film Institute Award.

In 2016, he was one of six writers hired for Succession, based loosely on several powerful media dynasties, including the Murdochs and the Redstones. The show has been a good fit for Glatzer: The writing team won a Golden Globe, a Peabody, and a Writers Guild award.

Succession’s showrunner, Jesse Armstrong, brings together “incredibly brilliant people in a room where you feel safe enough to pitch anything,” says Glatzer, who moved part time to London from his home in Los Angeles to be in the writers’ room. He was also on set for months at a time, often crafting alternate lines the night before a scene was filmed. One of his favorite characters to write for is Roman (Kieran Culkin), the bad boy son of media mogul Logan Roy (Brian Cox). “He’s unapologetically elitist and cruel. That can be fun,” he says. “You just let it rip.”

Needing to be closer to home, Glatzer reduced his role on Succession but remains a consultant for the third season. Meanwhile, he has four of his own projects in development, including a raunchy comedy series for TNT about political operatives in the early 1970s; an original series for Hulu; and a TV adaptation of the movie Good Night, and Good Luck.