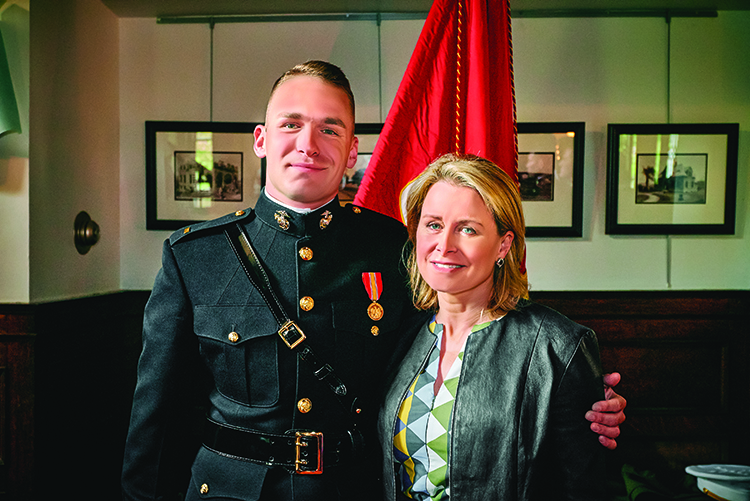 Clark Perkins ’18 spent four years goalkeeping for Colgate’s lacrosse team and volunteering for the Hamilton Fire Department. When he went on to enlist in the U.S. Marines, it was no surprise that he was progressing from saving his team and the community to serving the country.

“Clark had the unique way of making those he interacted with feel larger than life,” former Head Lacrosse Coach Mike Murphy says. “He was genuinely interested in how you were doing … he wanted to listen to what was going on with you.”

It was during Perkins’ time on the lacrosse team that he became interested in serving in the Marine Corps. He participated in the U.S. Marine Corps Platoon Leaders Course with teammate Lucas Cooper ’18, attending two six-week-long summer courses in 2015 and 2017 that functioned as basic training for officers.

Perkins explained why he was drawn to the Marines in a 2018 National Collegiate Athletic Association segment on MSN.com: “I viewed it as the most elite branch of service … and I wanted to challenge myself to rise to be the best.”

At the time of his death, Perkins was working through primary flight training as part of an eight-year aviation contract with the Marine Corps. A student naval aviator, he was assigned to Marine Aviation Training Support Group 22 at Naval Air Station Corpus Christi, Texas. He was on liberty when he passed away due to a surfing accident. He is survived by his parents, Chip and Debbie; his brother; and his sister.

Members of the lacrosse team, both former and present, held a Zoom call on Aug. 29 after hearing of his death. Teammate Tyler Schmarak ’17 said: “We were all lucky to know Clark, we are sad that he is gone, but we are more sad for the people who will never get to meet Clark and experience what it’s like to know Clark.”