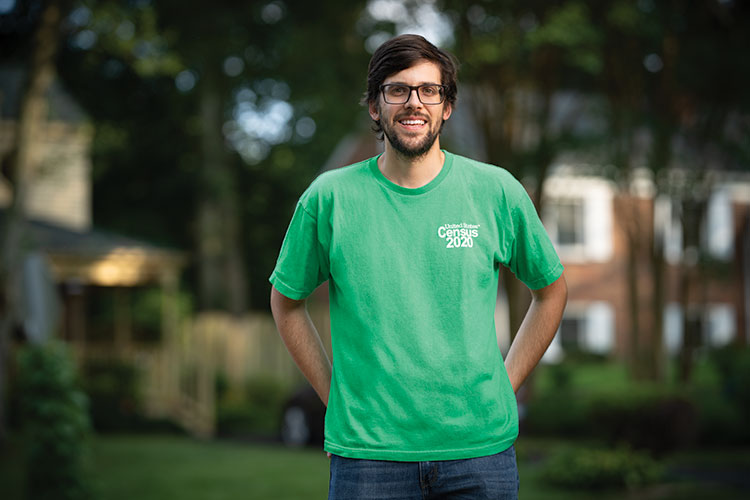 During his junior year at Colgate, Scott Konicki ’10 saw a poster in the math department advertising summer jobs performing statistical research for government agencies. He applied and landed a position with the U.S. Census Bureau in Washington, D.C. “Just seeing how a full decade of work goes into trying to execute something in a couple of months was fascinating,” he says.

After graduation, Konicki went back to the Census to work full time and never left. Now, he is contributing to the daunting task of ensuring that more than 330 million Americans are accurately counted for the 2020 census, which determines representation in Congress and allocation of resources for federal programs. “My job is in the Constitution,” Konicki notes. “We’re helping people across the country, giving them the political representation and funding that they deserve.”

Growing up outside Buffalo, N.Y., Konicki loved math as a child. “I was the nerdy kid who really liked school,” he says. “I enjoyed the puzzle-solving aspect of it — knowing there was an answer, even if there were different ways to get there.” While he knew he’d be a math major when he arrived at Colgate, he was inspired by economics classes, examining the real-world applications of the mathematical principles he was learning.

At the Census, Konicki uses statistics to test the accuracy of the count from forms sent back by residents and interviews conducted by census workers. After the completion of the nationwide survey, he will help conduct additional surveys of smaller samples, using statistical methods to compare the two counts and determine what groups of people may have been undercounted in the original survey.

In particular, Konicki has led work to develop new methods to accurately count children aged 4 and under, who have been historically undercounted in the census. “It happens a lot in households that are not nuclear families,” he says. For example, young children may be staying with a grandparent while their parent is trying to make ends meet or staying with an extended family member while a parent is incarcerated. “They don’t really see the child as part of a household, so they may not report them.” Because the number of children in a district can also affect funding for child health insurance, school lunches, and school construction, however, it’s essential that they be accurately counted.

Another project Konicki has addressed is cutting costs and increasing efficiency by pulling together data from other government sources in addition to the traditional census forms. “During the 2010 census, we knocked on everyone’s door who didn’t respond, but that can get expensive,” Konicki says. “So are there ways we can use information we already have?” By comparing data from the 2010 census with IRS, Medicare, and other federal records, he and his colleagues have developed scores to measure the confidence that a person observed on a recent federal record is still living at a particular address, improving the accuracy of the count.

Conducting the census during the coronavirus pandemic has added new challenges to the process, Konicki says, delaying the timing by which workers could go out knocking on doors, leading to data coming in later than usual. Officially, the census is supposed to provide a snapshot of where everyone in the United States was living on April 1. “The further you get away from that, the more chance that people have moved or don’t remember where they were, so we count them in the wrong place,” Konicki says. That makes his mathematical checks all the more important. “We do everything we can to make sure we are counting everyone and counting them accurately,” Konicki says. “We want to make sure everyone gets everything they are entitled to.”