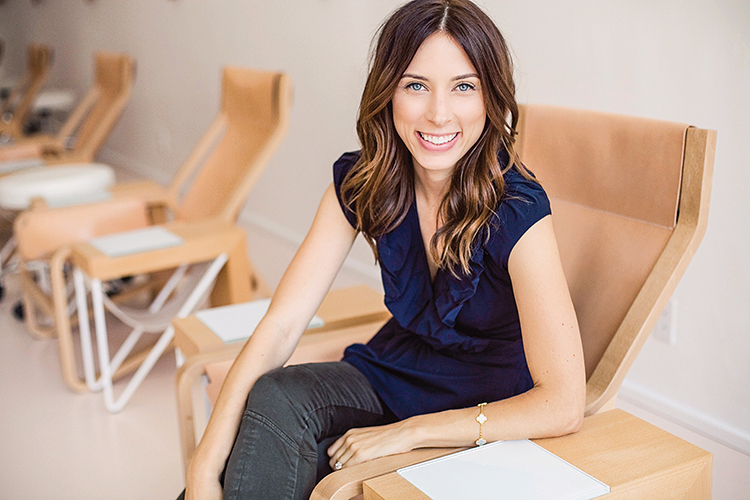 Manicures have been a form of self-care since Ancient Babylon, and the at-home bottle of polish came on the scene in the 1940s. The process of the do-it-yourself manicure hasn’t changed much since then — but it will, if Sarah Gibson Tuttle ’02 has anything to do with it.

Tuttle saw a gap in the nail market while getting a blowout in Los Angeles at the luxury hair salon Drybar. She wanted a new type of neighborhood nail salon, similar in service quality to the trendy styling business. With a background in finance and an entrepreneurial spirit, she started Olive & June, a trio of Los Angeles nail salons, in 2013.

Ever the entrepreneur, Tuttle has since expanded Olive & June to include products and insider knowledge to aid in the at-home manicure. The company offers a patented, ergonomic polish brush handle, The Poppy, and a cuticle serum, in addition to polish kits. Olive University, a section of the brand’s website, provides “everything you ever wanted to know about living your best mani life.” (Hint: Apply that top coat more often.)

For Tuttle, the process of getting a manicure is an easily accessible form of self-care, one she wants more people to tap into. She says people sport polished nails, via at home or salon treatment, on average six times per year, and that number should be higher because of the long-lasting payoff of a manicure. “It has a tail effect so much longer than hair and makeup,” Tuttle says. And, because manicures are the least expensive beauty service, those with less spending money can still buy in.

Enter the nail art sticker. DIY nail art became a craze with the advent of social media, and Tuttle says it’s still alive and well. She has the proof: Her $7.50 sheet, lined with miniature daisies, four-leaf clovers, and juicy cherries, sold out at Target in two weeks.

Tuttle isn’t slowing down — she craves the product development side of Olive & June, and there’s always something new on the horizon. “I love creating products for people that actually change their lives, even something as small as a manicure. Changing someone’s life for a week — that makes me so happy.”

She provides three trends to upgrade your manicure:

Think Pink: “Right now we’re seeing a ton of ombré. You love pink, so you have a mani that has five shades of pink. We just launched one called Pink Sweater. It’s this idea of nail art that’s not too crazy.”

Ooh La La: “The French manicure is back and people are obsessed with it.”

Dark Magic: “Really dark nails are already popular again. I think we’re going to go into a ’90s moment with all dark shades and short nails, and it’s going to feel like when I was wearing my FILA sneakers.”

A philosophy major, Tuttle had a close relationship with the late Professor Jerry Balmuth, who also taught her father, Jeffrey Tuttle ’72. “I loved [Professor Balmuth]. I felt both balanced and pushed, and I grew up.”