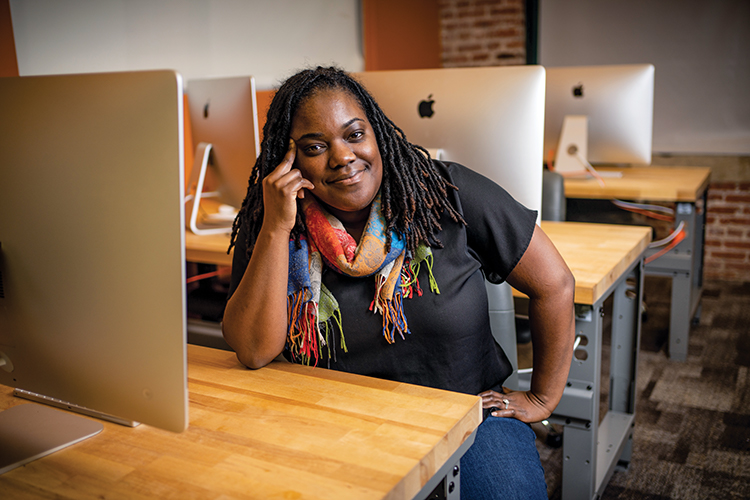 Baltimore attorney Dena Robinson ’12 joined the prestigious Public Justice Center as its Francis D. Murnaghan Jr. Appellate Advocacy Fellow last September. She soon found herself in even more rarified air when, just three months later, she appeared before the Fourth Circuit of the Federal Court of Appeals for an employment discrimination case. “The court only hears oral arguments in about 9% of the cases sent to them,” she says.

The case involved a black man who was fired on his first day on the job by a white boss. The reason? The boss conducted an internet search and found a years-old newspaper crime story that mentioned, but did not implicate, the employee.

“One of the judges asked me to define implicit bias on the record. We haven’t gotten a judgment yet, but if our case proceeds, that might make it easier for future plaintiffs in race discrimination cases in that court to claim implicit bias,” Robinson says. “It was an incredible opportunity.”

The fellowship is just the latest in Robinson’s 360-degree exploration of social justice, advocacy, and the law. While studying at the Benjamin N. Cardozo School of Law and the University of Maryland School of Law, she had one high-profile internship after another. She researched LGBTQ asylum seekers and transgender inmates for Lambda Legal. She worked in the Civil Rights of Persons with Disabilities Clinic for the National Association of the Deaf. She studied children’s rights and prison conditions litigation at the Southern Poverty Law Center.

“At times, impact litigation can lead attorneys to be out of touch with reality, because there isn’t direct contact with clients,” Robinson says. “So I worked simultaneously in the community, with students. I didn’t want to forget the stories and people behind the cases that make it to the court.”

At Wide Angle Youth Media, she helps Baltimore youth share their stories and engage audiences across generational, cultural, and social divides. “I’m interested in the power of storytelling to shift social systems,” says Robinson, who is the organization’s diversity, equity, and inclusion facilitator.

Her next prestigious opportunity awaits in the fall: the Department of Justice’s Honors program at the Civil Rights Division, which selects only 12 attorneys out of more than 500 applicants. “The typical route of most people in the program is to attend an Ivy League law school and do law review,” she says. “I didn’t take that typical path, but my experiences made me deserving, and they picked me.”

The program is a fast track for a legal career in the justice department. She’s hoping her assignment will allow her to either delve into hate-crime litigation or continue to work on employment discrimination. On the side, Robinson will continue offering diversity, equity, and inclusion training through her consulting business, Radical Roots. “My driving force,” she says, “is practicing the change I want to see in the world.”