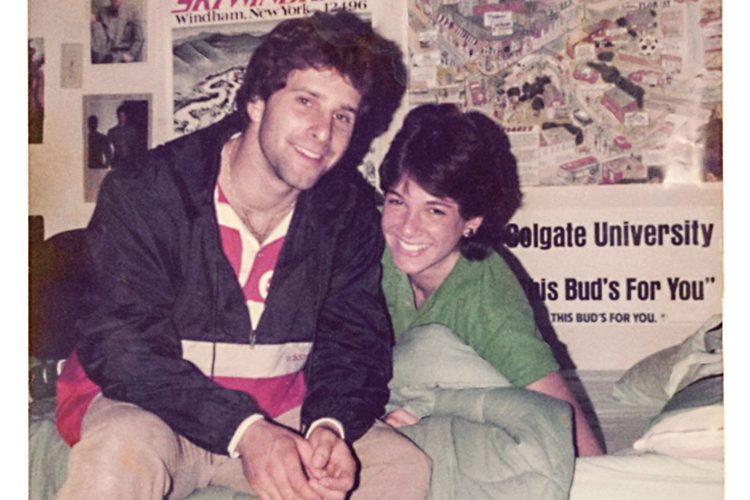 One Night Can Change a Life

Before I started Colgate in 1982, my expectations of the college experience were typical of a recent high school graduate: I was looking for a great education, memorable adventures, lasting friendships, and, of course, a lot of fun. One thing that was definitely not on my radar: meeting the person I would want to spend the rest of my life with. To my great surprise, my four years at Colgate gave me all of those things.

During sophomore year (1984), my life changed one night in February. Several women wandered into Theta Chi, the fraternity where I was living. I was totally mesmerized by one of them, whom I didn’t recall seeing before (I would have remembered). Yes, I was physically attracted to her, but that was only part of it — her smile and laugh captivated me. I’d like to say her engaging personality also won me over, but I can’t, because I was too shy and didn’t say a word to her that night. But I knew I had to meet her.

Eventually I learned her name and a little bit about her: Kim Kramer ’87 was a first-year from Long Island and was pledging a sorority. Fortunately, I had a friend in that same sorority, so I asked her to introduce us. She did (thank you, Bari Schechet ’85), and Kim and I spoke for the first time at Case Library. It was then that I got my first taste of what an amazing person she was: nice, smart, interesting, funny, genuine, and good natured. I wanted to get to know her more. Later, in February, we went out for the first time: dinner at a Chinese restaurant in Utica.

We stayed together throughout the rest of our time at Colgate. Kim brought calm and balance to my life. She was a reminder that there was more to life than studying, grades, and working hard. I still spent a lot of time in the library, but we saw each other every day. And Kim was, by far, the best part of my day. When we were apart — during semesters away from Colgate, summertime, and after graduation — we wrote letters, spoke on the phone, and visited each other. I could not spend enough time with her. She made my life complete and better. Our relationship continued after our time in Hamilton as I attended law school and she worked in loss prevention at Chubb Insurance.

Last May we celebrated 29 years of marriage (and 35 years together). It has been a truly amazing journey.

There have been a lot of changes since graduation — some good, some not so good. But the one constant in my life, and the one with whom I have been able to share it all, has been my best friend, my partner, my wife.

I have so much to be thankful for regarding my time at Colgate. But that one night in February 1984, by far, tops the list.