The Case for Grass-Fed Beef 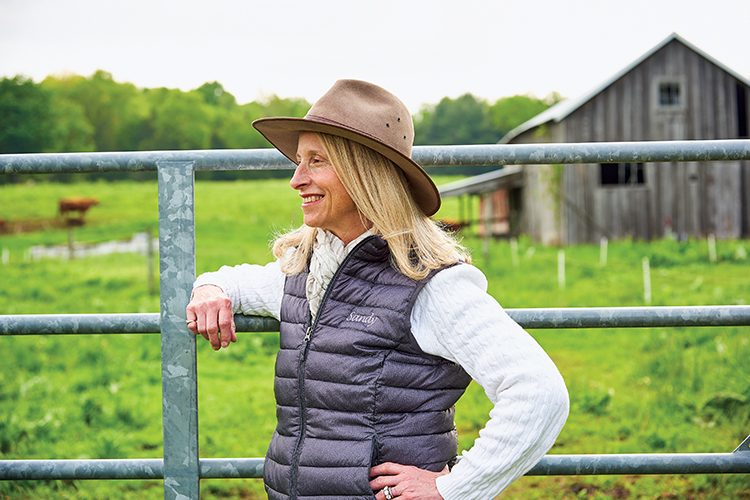 If you stood on a cattle ranch in 1919 and looked out at the cows, the gigantic bodied creatures with skinny legs might seem alien.

The cows of yesteryear looked different than the ones on farms across America today, and it’s because of a process called selective breeding, in which cows are bred to have long, stocky legs and svelte midsections. “It’s because cows have been bred to fatten better in a feed lot situation versus eating only grass,” says Sandy Pomeroy Goehring ’83.

At Goehring’s G&T Farm in Richfield Springs, N.Y., you’ll see the reincarnations of cows past.

Goehring, who was a Colgate economics major, and her husband, Leigh, spend most days in New York City’s financial district where they work in equity and commodity investing, respectively. More than a decade ago, Leigh became interested in the benefits of grass-fed beef, and the couple, along with their brother-in-law Doug Thompson, decided to buy a farm. They chose Richfield Springs, due in part to its close proximity to Colgate and Hamilton College, Leigh’s alma mater.

“Between my interest in economics that I got from Colgate and my practical experience of looking at businesses, I applied that to the business of running a farm,” Sandy says. “My husband, brother-in-law, and I have been able to put the best of our knowledge into practice.”

G&T Farm raises what Sandy refers to as sustainable beef. “All the things associated with industrial-scale farming, we don’t do,” she says. “It’s better for the cows and better for the meat.”

Some believe grass-fed beef is better for the environment than cattle raised in feedlots due to lower energy consumption and less soil depletion. It’s different than finishing on traditional feedlots, where the animals are confined to a small area eating mostly corn or grains. G&T’s cows are grass-finished, meaning they eat grass for their whole lives. The couple’s farm uses no chemicals; chickens and bluebird boxes naturally combat flies, and bees help fertilize clover and other flowering grasses for the cattle’s meals. “We basically have gone back to old-fashioned animal husbandry,” Sandy says.

The cows have free range over 3,500 acres, so they return nutrients to the soil through rotational grazing, in which the cows distribute their urine and manure naturally to the fields. To make sure the cattle have a balanced diet, for both their health and the quality of the meat, the farm gives them a mix of grass species (clover is their favorite). “It’s like they’re eating a gigantic salad,” Sandy says. “You want them to not just pick out one thing. You want them to eat the whole thing.”

When Sandy and Leigh decided to try out farm life, they hired consultants to find cows who “had very little tinkering with their genetics,” she says. “There’s an outward expression of characteristics that you can look for in a cow and determine whether it’s likely to thrive on a grass-fed diet only.” Once they picked their cattle from a handful of states, they brought them back to Richfield Springs. Their herd is now up to 1,500 — all with genetics the farm has improved through this selection process in the last 10 years.

Thompson, cowboys, and other staff keep the farm running day to day, while Sandy and Leigh handle the business side of things, visiting every couple of months.

G&T has its own abattoir, or slaughterhouse, which Sandy says keeps the cows stress-free until they’re processed. “The least amount of stress you can put on the animal, the more likely you’re going to have a tender piece of meat,” she says.

Not all grass-fed beef is created equal, Sandy adds. At many butcher shops, the meat comes from several farms, which makes its quality inconsistent. So, G&T’s next venture is making their artisanal beef available to central New Yorkers, rather than just distributors. The couple is planning to open a store in Cooperstown, called The Green Cow, complete with a commercial website. And, to make the business even more of a family affair, Sandy’s other brother-in-law, Charles Hurdman ’83 (married to her sister, Meg ’85), will run the company’s marketing efforts.

“I’ve become emotionally attached to the area, between the family connection, and Colgate,” Sandy says. “So when we were looking to do something like this, we thought that the perfect place to do it was upstate New York.”