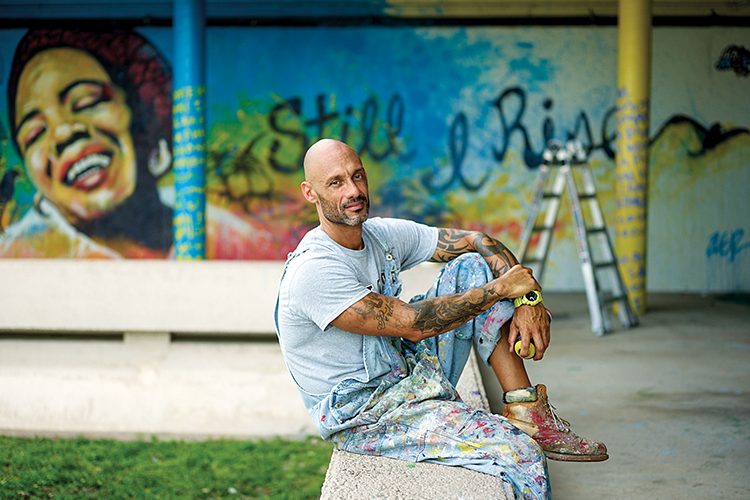 What was a once an all-grey cement courtyard now features a vibrant mural depicting a woman, surrounded by delicate flowers, a black bird adorning her shoulder. She’s smiling, and the words “Still I Rise” dance across the wall next to her.

An homage to Maya Angelou’s “Still I Rise,” which tells the age-old story of picking oneself up from a dark place and thriving, the mural mirrors countless individuals who have left the Miami Dade County Juvenile Detention Center.

Girls living at the detention center created the picture with the help of a local artist through HOPE Murals, a year-old initiative conceptualized by German DuBois III ’91. The idea for the organization was simple: Give those facing hard times an outlet to express messages of hope. Participating in a similar mural project to raise awareness and collect funds amid the devastation of Hurricane Maria showed DuBois how art could positively affect a group of people, both those making and viewing the pieces. “I saw the impact mural work could have on people in a very personal, almost spiritual way,” he says.

Since graduating from Colgate, the sociology and anthropology major has worked in education. Through positions ranging from high school teacher to state level administrator, DuBois has worked to empower youth. With HOPE Murals, he sought a way to connect with kids who were in high-risk situations and give them optimism for a better future. So, every Thursday, he goes to the detention center to work with them on the mural project. “These kids are at one of the lowest points in their lives. Regardless of your background, hope is something that on a basic human, fundamental level, everybody can connect to.”

DuBois started small in March 2018, with a handful of boys at the detention center. The program, which has since grown to include more teens, runs in phases: They brainstorm what they’ll paint, which opens a dialogue about their experiences both in and prior to their time in the facility. Many youths there struggle with mental health issues such as depression, and DuBois says the project, which includes one-on-one time with emerging Miami artists, gives them something to look forward to every week. Once they decide on a topic, kids arm themselves with spray paint cans and get to work on making the weather-battered walls within the south Florida facility look alive. DuBois serves as a mentor throughout the process, but lets the kids take charge when planning and creating the murals — they’ve painted 13 so far.

DuBois says the most meaningful connections he’s witnessed have been with the young women in the program. In the initiative’s third iteration last May, which included only girls, female officers grew interested and shared their own struggles with the participants. The brainstorming phase of the program led to deeply personal informal discussions. Through stories of their own abuse, domestic violence, and homelessness, officers told the girls how they persevered through adversity, going to school and working toward a better life. DuBois says their lives were so parallel, the discussion made the girls view the officers as mentors.

Now, DuBois is applying for 501(c)(3) status for the organization. Once that happens, DuBois hopes to expand his reach to other juvenile detention centers in Florida, helping more teens thrive through art.

He wants them to be able to rise.