Her Motto: The Law is There to be Changed 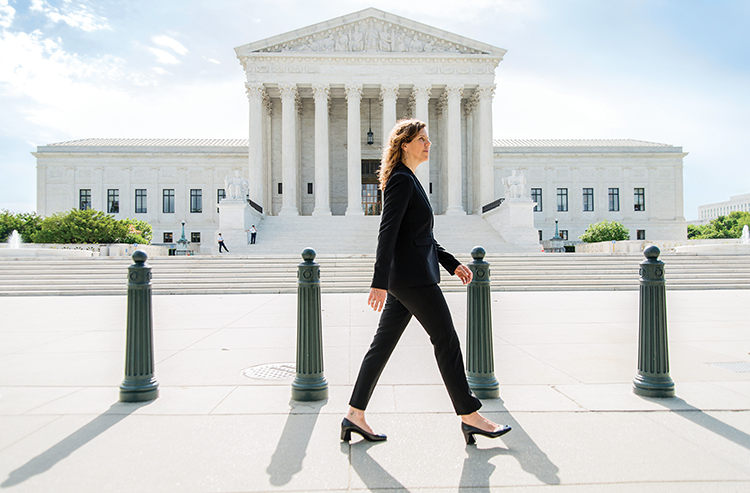 It’s the ultimate David and Goliath story. When attorney Katie Redford ’90 and her EarthRights International nonprofit decided to sue the World Bank’s International Finance Corporation (IFC), experts said it was impossible. But Redford’s been told no before. As with previous instances, she proceeded anyway … and won.

In the U.S. Supreme Court case Jam v. International Finance Corporation, EarthRights represented Budha Ismail Jam and fellow fishermen from Gujarat, India. The plaintiffs say that their livelihoods are suffering because of environmental devastation caused by the nearby Tata Mundra coal-fired power plant. The IFC — the private lending arm of the World Bank — is a big investor in the plant, and EarthRights claims that the IFC ignored the plant’s harmful environmental practices.

The crux of the case, however, was whether the IFC was immune to lawsuits under the protection of the International Organizations Immunity Act. “Everyone told us, ‘You can’t sue international financial institutions because they have absolute immunity,’” Redford says. But on Feb. 27, in a 7-1 ruling, the Supreme Court decided that the IFC can be sued in U.S. courts. Although the decision didn’t result in immediate reparations for the Gujarat fishing community, it removed the IFC’s absolute immunity in this and all future cases.

EarthRights became involved in the case after being approached by other nonprofit and community organizations. “The World Bank is complicit in funding problematic projects all over the world,” Redford says. “Many of its projects do serve an important development mission, but our argument is, with any institution that thinks it doesn’t have to obey rules, there’s going to be bad people and things are going to go wrong.”

Comprising lawyers and activists, EarthRights aims to “combine the power of law and the power of people in defense of human rights and the environment,” Redford explains. She’s one of the three founders who started the organization in 1995. “Basically, we came up with this legal theory — which was novel at the time — that in the age of globalization, corporations should be subject to the law,” Redford says. “When we started, international law hadn’t caught up with corporate globalization.” Thus, their first case intended to “try to bring the power of the legal system to bear on corporate human rights abuses in foreign countries.”

In that first lawsuit, EarthRights took on Unocal Oil Corporation for human rights abuses related to an oil pipeline in Myanmar. It was based on Redford’s 1994 law school paper in which she was looking at the Alien Torts Claims Act provision giving foreigners the right to sue over international law violations. She scored an A on the paper, but her professor said, “You can’t sue a corporation for human rights abuses in foreign countries.” To which Redford responded, “Why not? The law is there to be changed, and you’re just saying that because no one’s ever done it before.”

One year later, having co-founded EarthRights, Redford was co-counsel on Doe v. Unocal. It became the first case in which jurisdiction was granted over a corporation for human rights abuses, and when the case ended in a historic settlement, it was the first time a company had to pay for those abuses.

The events inspired the award-winning documentary Total Denial, which focused on Ka Hsaw Wa — whom the New York Times review called “the stuff heroes are made of.” Ka Hsaw Wa, an ethnic Karen from Burma, is a human rights activist who was on the forefront of the lawsuit against Unocal. He’s also co-founder of EarthRights and Redford’s husband. They met when she was a law school student interning for Human Rights Watch in Myanmar.

Now with two children, the couple travels between their Washington, D.C., headquarters and offices in Myanmar and Thailand. The Chiang Mai, Thailand, location is home to the Mitharsuu Center for Leadership and Justice, which they opened two years ago. The Platinum LEED-certified building is an “ecoplex,” housing the organization’s EarthRights School for future leaders, a legal network, and a legal advocacy institute.

With the growth of the organization, Redford now oversees EarthRights, identifying strategic new initiatives, selecting cases, and exploring new areas of impact. A second case against the IFC that was running parallel to the Jam suit is now moving forward in the U.S. Supreme Court. In this case, EarthRights claims that the IFC is “complicit in widespread violence in Honduras by financing a company notorious for harming and even murdering local farmers,” Redford says.

Back in the United States, she has been going to Florida, Colorado, and coastal communities to learn about the harms and costs those communities are experiencing because of climate change caused by fossil fuel corporations. Redford is specifically concerned with the ways in which indigenous and lower income people are more likely to be affected by climate change.

In thinking about her work overall, Redford says, “Let somebody else do the easy cases. We’re a small and nimble organization, relatively speaking, so we should take the cases that other groups won’t and blaze a trail.”