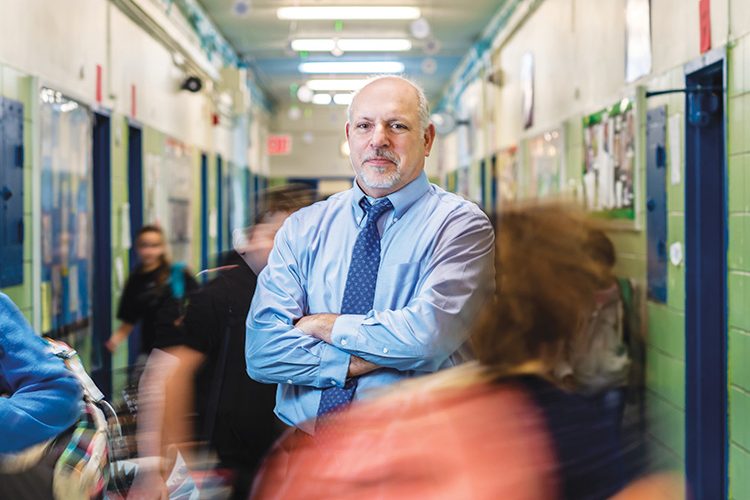 When Henry Zymeck ’82 finished speaking, it felt like all of the air had left the room. The next day, the calls and e-mails from the press (looking for a story) and parents (looking for an explanation) started.

Then he found out about the video.

Zymeck didn’t expect reporters to be at the April 24 meeting. It was a public forum for parents and school officials to discuss a proposed plan to desegregate the schools in New York’s District 3, which covers a section of Manhattan’s Upper West Side. Zymeck, a principal at the sixth through eighth grade Computer School on West 77th Street, supported the plan and attended to hear the community’s feedback. It wasn’t all positive. In the footage, taken in a school cafeteria, an impassioned Zymeck proclaims:

“There are kids [who] are tremendously disadvantaged. To compare these students and say, ‘My already advantaged kid needs more advantage! They need to be kept away from those kids!’ is tremendously offensive to me.”

Since he made his statement, he’s brought the issue of school integration to light for many, appearing in several TV news broadcasts and a New York Times Op-Ed.

According to the plan, which was recently approved by NYC’s Community School District 3, each school is required to set aside 25 percent of its seats for students who are both economically disadvantaged (based on free and reduced lunch numbers) and had test scores below the state standards. “That makes all schools accountable for providing educational opportunities for kids across the academic sector,” Zymeck says. “It isn’t just about racial diversity or ethnic diversity, but also economic and academic diversity.”

Zymeck has long lauded diversity in schools, believing New York City is a sea of cultures and backgrounds, and geographic location or financial circumstances shouldn’t factor into a student’s education. As the neighborhood surrounding The Computer School became more gentrified over the years, he reached out to schools serving economically disadvantaged students in other parts of the district, including charter schools. It shows in The Computer School’s numbers.

At Zymeck’s school, 48 percent of students are white, and 47 percent are Asian, black, or Hispanic, but that’s not the norm for selective schools in District 3. At Stuyvesant High School, the top-rated school in the city, fewer than 5 percent of students are black or Hispanic. “My feeling is that intelligence transcends racial and ethnic divisions, so a citywide school should reasonably represent the diversity of the population,” Zymeck says. “And if it doesn’t, there’s something wrong with the process.”

So he stood up and said his piece. He did it for the kids whom he felt would be disadvantaged by not having a diverse peer group.

He also did it for the old Henry.

When Henry Zymeck, the 16-year-old kid from a packed school in the Bronx, opened his car door in Hamilton in 1978, the rural, open feel of Colgate was an escape. He was an economics major and part of the University Scholars Program (now the Office of Undergraduate Studies), which began in part to strengthen the University’s commitment to diversity.

Moving from a lower income high school to an elite institution gave Zymeck access to different points of view and a more wellrounded education. “I personally benefited from the notion that schools should be open minded and proactive when it comes to admissions,” he says. Now, 37 years after leaving the hill, he’s working to give students in both The Computer School and District 3 a similar opportunity during their formative years.

When Zymeck first arrived at The Computer School in 1992, there were three goals written on the wall: Kids first. High expectations. No excuses.

“To me, this is really about all three of those things. I felt that we weren’t putting kids first. We were putting some kids first.” Zymeck seeks to change that.