A Lawyer Walks into a Bar and Doesn’t Leave 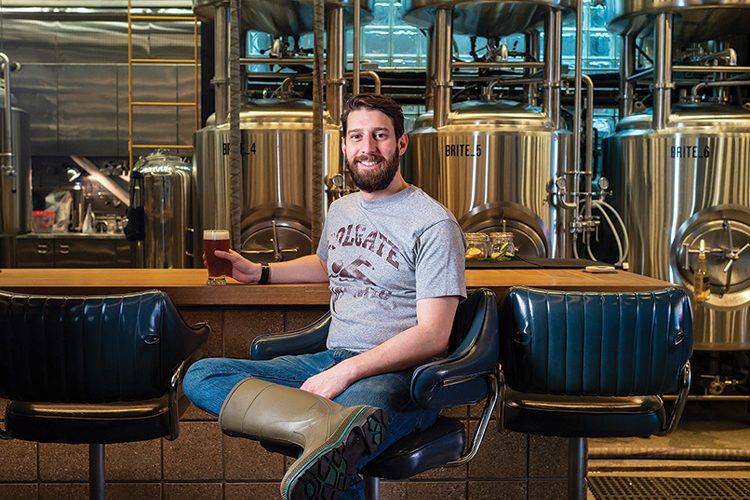 After experiencing what he jokingly calls “the youngest midlife crisis,” at age 32, Drew Kostic ’08 traded in the American Bar Association for a different kind of bar. Put yourself in his boots with these 13 steps:

At 15, take a class called Selected World Literature and read a Buddhist text. Discover that you have a particular interest in Tibetan Buddhism.

Attend Colgate and decide you want to major in psychology. Take CORE Tibet with the late Vic Mansfield. When all of your friends study abroad in London or Prague, take a nine-week intensive course in Tibetan language to master the dialect and prepare for your upcoming journey. Live in Tibet for four months, “an opportunity that 99 percent of the world will never have.”

Continue your study of Tibet when you return to Colgate. When the Dalai Lama comes to campus, introduce him on behalf of the student body. Afterward, greet him in the Tibetan language. He will laugh at you. You will almost faint.

For your honors thesis in psychology, study the Tibetan Buddhist perspective of death: Value today because tomorrow you may be gone. Research how that point of view might lessen anxiety about death.

Graduate from Colgate and attend Duke University Law School. Become a lawyer and practice “pretty much everything you can in New York,” from international trade law to white collar crime.

You’ve always been interested in brewing, so, as a hobby, you start homebrewing in your (much too small) apartment. Experiment with flavors and discover your favorite creation: cantaloupe and honeydew melon IPA. Drink responsibly.

After six years, realize law wasn’t what you thought it’d be. You spent a lot of money on law school, so you don’t quit yet.

You’re pretty good at this brewing thing! Go to the Auburn University brewing graduate program to get more formal training.

Recall Tibetan Buddhist teachings and think, “I could get hit by a taxi tomorrow.” Seize the day.

A friend of a friend calls you, asking if you to be in a documentary called Brewmaster. Say “yes.” Record a small clip. End up being a main character in the film. Serendipitously meet Andy Marks ’86, a producer on the film.

Give your two weeks’ notice at the law firm. Start work as assistant brewer at Circa Brewing Co. in Brooklyn.