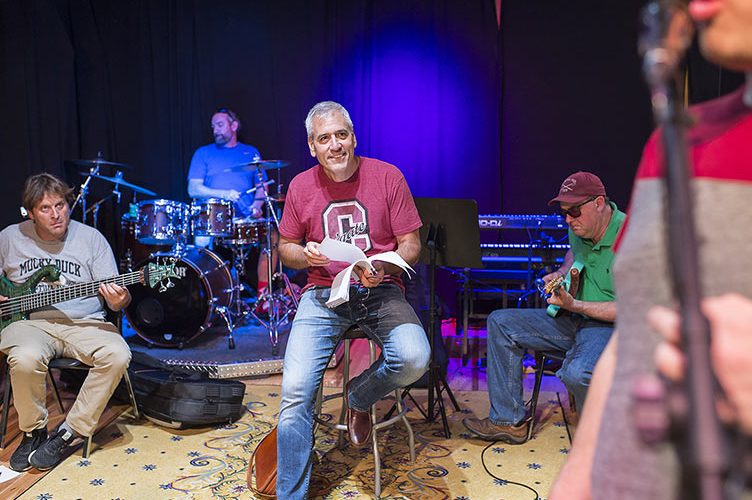 Some songwriters begin with a melody; others find inspiration in a catchy phrase. For David Kelly ’86, writer and composer of the new musical Anxiety Stew, it all started with a little too much dessert.

“I happen to like cannolis a lot, good ones,” says Kelly, who grew up in a Sicilian family. “Once, I had too many, and I woke up in a cold sweat because I had a dream I was trying to swim my way through a cannoli shell.”

A less creative person might simply have told someone about the anxiety dream. Kelly went further. A Wall Street quantitative analyst by day who has performed original rock ’n’ roll songs in “just about every dive in New York,” he wrote a song about the dream. The song in turn grew into a stage musical set in the office of a psychologist who specializes in food issues. Other original songs in the revue include a sexy vamp about hors d’oeuvres and a rap based around the hook from the children’s classic “On Top of Spaghetti.” The sum of these compositions is Anxiety Stew, which made its New York City debut at Cherry Lane Theatre in June.

When Kelly finished writing the show, he brought in college friend (and partner in ’80s rock act Then Omaha) Steve Olejarczyk ’86 to serve as musical director. Greg Koerner ’87 later joined as bassist of the on-stage Anxiety Stew band, the Stew-Nods.

Kelly says the sensibility the three collaborators share as alumni informed the show’s sneaky-smart sense of humor. “They added a whole other set of colors to what I wrote,” he recalls. “With these guys, I know that what they end up doing will be cool and tasteful. That’s the Colgate profile — you can have confidence that they’ll get the joke.”