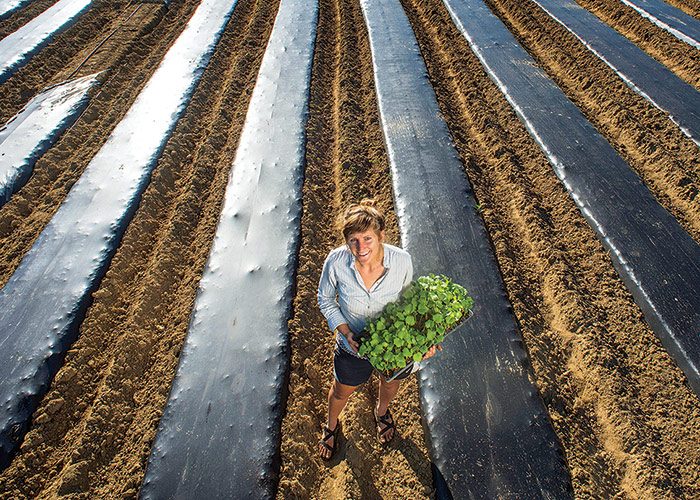 I arrived at Colgate in 2004 with an interest in social justice and vague notions of becoming an international human rights lawyer.

As a peace and conflict studies major, I studied the role of the United States in the world, and I was deeply disturbed by what I learned. So, I participated in protests against state-sponsored violence in Latin America, the war in Iraq, and genocide in Darfur.

I also wanted to do work that connected oppressive systems with local issues. So I volunteered at the Hamilton Food Pantry with the Colgate Hunger Outreach Project. As a Manzi Fellow in Boston, I spent a summer studying state homelessness policy and serving lunches at a center for homeless women.

These experiences taught me that, in order to sustain myself, I needed my day-to-day work to be generative. I was drawn to work that cultivates solutions and, it turns out, to cultivating soil.

When Carrie Blackmore ’08 invited me to work at a farm in the Adirondacks for the summer of 2009, I jumped at the chance to get my hands in the dirt. For the first time, I ate food that I grew myself, and I was hooked.

For me, farming is about that profound connection between something that grows in the soil and something that nourishes me, but it’s also connected to the larger systemic struggles I was involved with as an undergraduate. A just food system ensures everyone has access to healthy food that’s grown in a way that protects the environment, and I found a way to help make that food system a reality.

In 2016, I started Owl’s Nest Farm, where I grow 3.5 acres of vegetables in Upper Marlboro, Md. As a small-business owner, my day-to-day work is made up of many small actions: planting tomatoes, repairing irrigation lines, harvesting bunches of kale. They don’t always register in the world of international institutions and policies, but they make a difference to chefs who care where their produce comes from and to my customers who want locally grown, pesticide-free produce. I love that my work is making people and the planet healthier, and that together, we’re all a part of creating a more just food system.