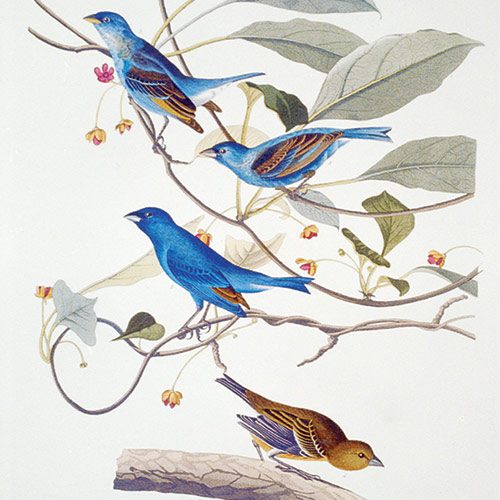 Sustainability director John Pumilio is on a quest to explore — and record — Colgate’s ornithological richness.

Sustainability director John Pumilio likes to ask the groups he leads through Colgate’s woodlands, “Did you hear that?” As his charges strain their ears, they start to hear the mellifluous sounds of songbirds in the trees above. “Most people tune them out,” says Pumilio. “But when they listen to the power of a blackburnian warbler or an indigo bunting, then get out their binoculars and realize how beautiful these birds are, people get hooked.”

Pumilio has identified more than 80 species of birds in Colgate’s forests. Over time, Colgate has been restoring its woodlands to a native deciduous forest, providing habitat for migrating songbirds, many of whose numbers are dwindling. Some of these birds stop off in Hamilton for a few weeks. “Knowing they depend upon the Colgate forest for a portion of that journey reminds me that we are part of conservation efforts that are hemispheric in scope,” Pumilio says.

Scientists are still trying to understand the exact pathways birds use to travel from their wintering grounds in Central or South America to their breeding grounds up north. For a long time, biologists believed that songbirds traveled set flyways to migrate across the hemisphere. But as ornithologists have developed new tools to better recognize migration patterns, they’ve realized that different species and even individual birds are using their own migration routes, widely spread across the continent. “They may be using prevailing wind patterns or following mountain ranges, but generally they are migrating all throughout North America,” Pumilio says.

For decades, bird migration studies have relied on catching birds and banding them, in hopes of finding the birds in a new location to understand how they traveled. More recently, however, scientists have been able to follow large groups of birds by using the same radar stations that track weather patterns. Other researchers have developed tiny geo-locators — instruments light enough to not impede the flights of songbirds — in order to trace the journeys. Another technique relies on recording tweets that identify species flying at night.

Pumilio is recording the soundscape of Colgate’s woodland. He is working with biology professor Ana Jimenez and student researchers to strategically place microphones along fixed points on the ground throughout the Colgate forest. Through these recordings, the team has created a baseline that can be used to compare changes in the soundscape and Colgate’s breeding birds across time. Indigo buntings, for example, have just one song, but birds living only a few miles apart have different dialects. By recording how the local dialect changes over time, biologists may learn how birds are spreading locally from place to place. Robins, meanwhile, have 60 or 70 different songs, but each bird sings those songs in a unique order. The soundscape recordings may allow Pumilio to “fingerprint” individual birds and then see if they return to Colgate year after year.

Over time, those data can help biologists understand the health of the forest and the changing makeup of its species — as well as the unique role that Colgate’s woodlands play in supporting the conservation of endangered songbird species. “We tend to think about preserving their breeding habitat, or their wintering habitat, but not the importance of preserving their habitats during their migrations,” Pumilio says.

For the rest of us, better understanding the sounds of the forest can help us appreciate the bird life around us. “Birds put a lot of time and energy into singing, and it’s an important part of their life histories,” Pumilio says. “When you open that up to people, it can really enrich their outdoor experience.”