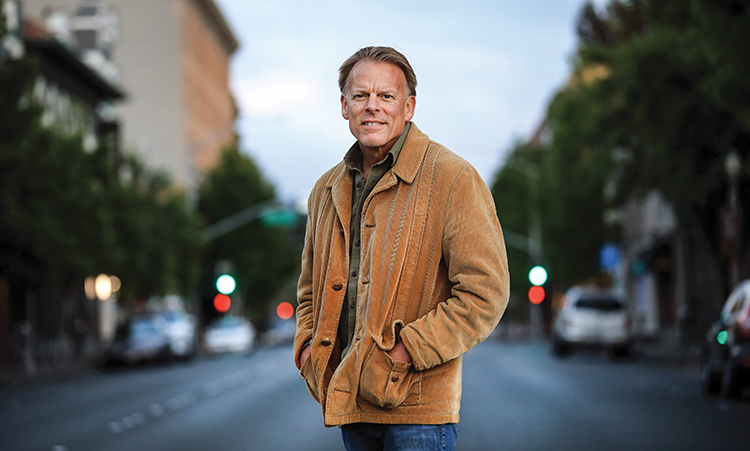 See the cheerful signs awaiting them, the bottled water and energy bars placed on doorsteps across the Republic. With delivery drivers basking in a heroic light during the coronavirus pandemic, I will confess to a twinge of nostalgia for my days piloting a van for Amazon.

Yeah, you heard me — I’m copping to it right here: After 33 years of writing for Sports Illustrated, I spent five months in 2018 and 2019 slinging packages for Jeff Bezos. What surprises me most, looking back on it, was how fulfilling I found the work. While it often fatigued me (and some days straight up kicked my butt), the job did not depress me. Quite the contrary. What I felt, after a 10-hour shift in the truck, was the contentment that follows an honest day’s toil. It’s fair to say that I’d been flailing in the 17 months since the magazine let me go. The delivery gig gave me some structure, purpose, and dignity, which I’d been missing. It wasn’t my dream job, or anything close. But it was enough.

It was also, it turned out, a path back to professional writing. I couldn’t see it at the time, rooting around for boxes in the cargo bay of the Dodge Ram ProMaster, but I was doing exactly what I had to be doing, to get where I needed to go.

At $17 an hour (plus overtime, mind you), I was making a little more than my starting salary at SI, where I was hired in 1984. This was around the high-water mark of the Time Inc. publishing empire, when expense account abuse was not just expected, it was encouraged. Even lowly reporters such as me could draw cash advances, write off dinners, and make liberal use of the company’s car service.

As I clawed my way up the masthead, those perks began to dwindle, darn the luck. A 1990 merger with Warner flattened our stock price, but not so much as Time Warner’s catastrophic coupling, a decade later, with AOL — a misbegotten merger that has made me mistrust, ever since, anyone who uses the word “synergy.”

Getting laid off was like getting punched in the face in a bar fight: It didn’t hurt as much, or as long, as I thought it would. Sure, I was blindsided and a tad humiliated. But it wasn’t long before I was excited, even exhilarated by this opportunity to reinvent myself. I liked that word and leaned heavily on it during those first few months in the wilderness. As it turned out, I was bad at reinventing myself — almost as awful at it as AOL and Time Warner were at finding synergies.

I took a couple big swings after the magazine threw me out on my ear. My wife, Gina, and I arranged a home exchange and moved to Oahu, where I hoped to write and produce a TV series on high school football in Hawaii, like Friday Night Lights, only with more hair and vowels.

No? Administrators not down with camera crews in school? How about this: I would become a political speechwriter! How tough could that be? I read books by Peggy Noonan and William Safire. I flew to D.C. for a daylong clinic at West Wing Writers. They were hiring!

They were hiring much younger people. People with experience in politics. “We’re going in a different direction,” they told me (after they’d charged my credit card $995).

After whiffing on those experiments, I settled into the markedly less glamorous existence of a freelance writer. The pay was low, the work unsteady. On the bright side, pants were optional.

One of the reasons it felt right to take the plunge with Amazon, no matter how it looked from the outside, was that I was demonstrating agency, taking the fight to the universe. By then I’d burned through the Time Inc. severance and all my stores of bonhomie, emailing and chatting up editors who, in the end, had little to offer. I’d expended too much time sweating and fretting over cover letters — to AAA, AARP, Airbnb, Ancestry.com, the political consulting firm Anne Lewis Strategies, and those were just the A’s. I needed to get out and DO something.

It was unquestionably the right call. Oddly, paradoxically, the job built my confidence, buoyed my self-esteem. It gave me a wide range of new skills: whipping a 20-foot-long van around like a Mini Cooper, figuring out creative ways to park and double-park — on curbs and medians, in driveways, leaving juuuust enough space for traffic to get past.

In a pinch, I learned, I can scale a 5-foot gate, then drop lightly to the other side like a cat burglar to make three deliveries in a locked apartment complex. Working in a maelstrom that blew down trees and drove many of my colleagues in early, I got 287 of the 299 packages off the truck. Would’ve finished, but was called in after 11-plus hours on road.

The Amazon experience made me more disciplined, accountable, empathetic, and resourceful — especially at finding places to void this 59-year-old bladder. (If there was a bustle in your hedgerow — I’m addressing a homeowner high up on Henry Avenue, overlooking I-80 in Pinole — don’t be alarmed: It was just me, answering an especially urgent call. Terribly sorry. Couldn’t be helped.)

That said, it still stung, every time I hooked a right off of Kenyon Avenue, in the Berkeley Hills, onto Colgate Avenue, whose street sign seemed to mock: Way to go, Murph! Look where your bachelor of arts in English literature has taken you!

It was a hell of a ride, and then it was over.

I’d just schlepped an XL box up 20 steps to a house in those same Berkeley Hills on a drizzly January afternoon when I noticed I had an email from Ted Appel, managing editor of the Santa Rosa Press Democrat, a mid-sized paper in Sonoma County that punches well over its weight class.

Two months earlier, I’d written about my Amazon experience for theAtlantic.com. After reading that essay, Ted had invited me up to Santa Rosa for an interview. On this day, he was calling to offer me a job.

I’m now in my 15th month at the PD. As a general assignment reporter, I’m covering everything but sports: cops, floods, wildfires, vaping, vaccinations, the homeless crisis, and, obviously, the coronavirus.

I wrote an A1 story on the local boy who went off to Cal Poly, joined an engineering club, and designed, with his fellow nerds, bionic hands for a 10-year-old burn victim. It got me thinking: Is Tom Brady more of a hero than my Cal Poly whiz kid?

These days I’m chronicling a different gallery of heroes. Unlike my subjects at SI, they haven’t hit a genetic jackpot. But they’re often more interesting, between you and me, and no less deserving of the spotlight.

My time away from the writing game left me with a keener appreciation for it. I don’t much care that I’m playing smaller rooms. I’m deeply grateful to be doing the work (I think) I was put on the planet to do: telling stories.

Delivering led to my deliverance. I am defibrillated, reanimated. I am reinvented.