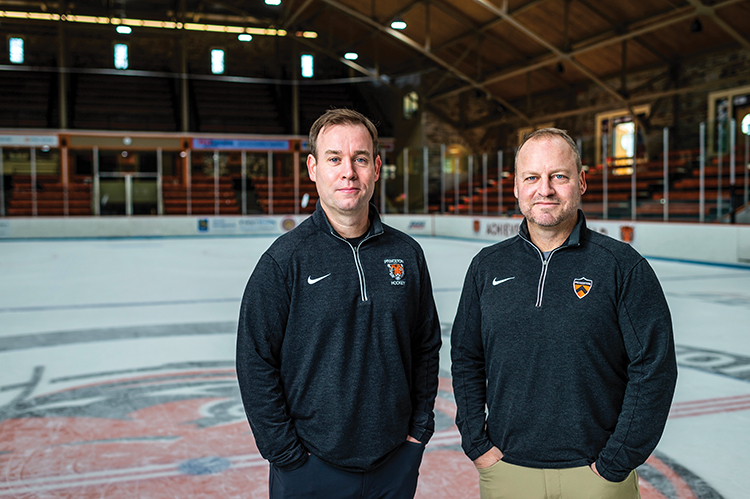 When Ron Fogarty ’95 and Brad Dexter ’96 heard the news that Coach Terry Slater had died of a stroke on Dec. 5, 1991, they’d just returned to Hamilton from an away game.

Fogarty and Dexter came to the University in part to be mentored by “The General,” who’d coached Colgate to the national championship game the previous year. “It was devastating,” Dexter says. “We weren’t prepared for it.”

But, in the face of grief, the Raiders pulled themselves up to achieve greatness: Under a new coach, Don Vaughan, the team reached the semifinals.

Fogarty and Dexter developed an even closer bond since their college days. “Now, we have new responsibilities,” Dexter says. “So our conversations are about different things; but the rapport we have, I haven’t noticed a difference from the day I met him.”

Nearly three decades later, the friends are about the same age as Slater when he was their coach. And, like Slater, they’re coaches for a Division I hockey program — at Princeton University.

Fogarty and Dexter’s connection started in 1991, when they were roommates, teammates, and educational studies majors. Dexter was a self-described hockey junkie who always had a book on the sport buried in his bag. Fogarty was energetic and could ease tense social situations with humor.

A love for the game coursed through their veins, but they took different approaches to their post-grad years. Fogarty played for a couple of minor league teams, then coached at several colleges and universities, including Colgate. Dexter played in Europe and the minor leagues until age 33; midway through, he served as an assistant coach at Clarkson University (alongside Fogarty). “Playing professionally allowed me to mature as a person and a player, which was invaluable to me when I became a coach down the road,” Dexter says.

The Road to Princeton

Fogarty had spent seven seasons coaching the Adrian College Bulldogs, a Division III team that earned several trips to the NCAA tournament under his tenure. Dexter had spent nine years as Colgate’s assistant coach, where he helped the Raiders reach the ECAC championship five times. In 2014, when the top job at Princeton opened, both men sprung at the opportunity.

“We’d always joke, if anyone got a head coaching job, they’d bring the other along,” Dexter says. So, when Fogarty got the call, Dexter was his next.

Back on the Ice — Together

At the center of Fogarty and Dexter’s friendship is trust. They had rock-solid faith in each other on the ice as teammates, and that connection still drives their relationship as coaches on the sidelines. If Fogarty throws out an idea and Dexter disagrees, Fogarty will consider modifying the plan. If there’s a technique Fogarty wants to try out, Dexter will adjust on the fly.

“We’re on the same wavelength,” Fogarty says. “I can trust him all the time because of our mutual respect.”

In the seasons leading up to Fogarty and Dexter’s move to Princeton, the Tigers had a losing record. But after a few years adjusting to the team and their roles, the coaches have seen: Princeton’s first ECAC championship in a decade, a trip to the NCAA Tournament, and players entering the NHL.

“We pride ourselves in recruiting and developing a great person,” Fogarty says. “We try to get the best player, and we make sure they’re the best for the culture that we create every day.”

But, more than anything, it’s all about generating and maintaining relationships, Fogarty says. It’s about forming a bond with players. It’s about trust.

Like the trust he has with Dexter. A trust that’s lasted nearly three decades.