A Different Kind of Dad Rock 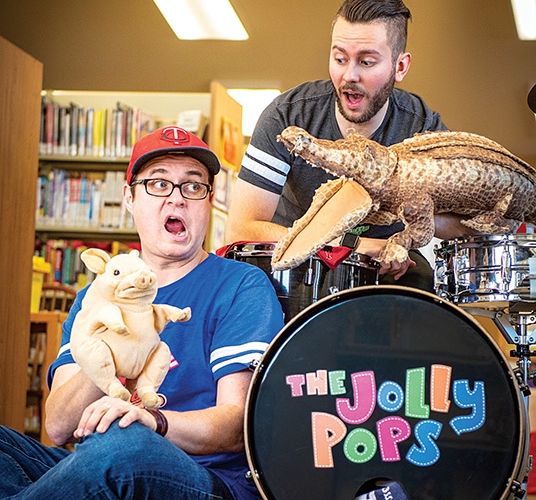 Billy Hartong ’97 plugged his acoustic guitar into an amplifier and readied his microphone. Adjusting his conductor’s hat and Buddy Holly-esque thick-rimmed glasses, he blew a train whistle and began to play his throwback hit “Mama Go Choo Choo.” His audience cheered, forming a conga line. They are all under the age of 10.

Hartong is the founder and front man of the children’s music group The Jolly Pops. The classics major got his start in music jamming with college bands in fraternity basements and local venues, eventually touring with the band Breaking Laces for more than a decade. Once he settled into fatherhood, he adjusted his songs for his new (read: younger) audience. He turned his aptitude for entertaining the next generation into a career with The Jolly Pops, seeking to help kids develop their own musical tastes in an energetic atmosphere.

With a rotating band of “happy dads,” Hartong cruises (in his black Toyota Sienna) to gigs at libraries, schools, and summer festivals. Get to know him through some of the band’s favorite objects:

Conductor’s hat/whistle
“The first song I wrote for The Jolly Pops was called ‘Mama Go Choo Choo.’ My wife, Sarah, would leave to get on the subway in the morning. My oldest child was 3 years old, and anytime mama left, she would cry. I started singing her what became the song, and it calmed her down.”

Pig puppet
In addition to his larger shows with The Jolly Pops, Hartong performs at local schools. “I never really wanted to be a puppeteer, but I started bringing puppets into the classroom. I’ll show up at a preschool now, and they’re not even interested in seeing me. They just want to know where the pig [‘Bacon’] and alligator [‘Chompy’] are.”

Acoustic guitar
Hartong uses his acoustic guitar to write songs in styles ranging from heavy metal to reggae to bluegrass. “We’re introducing kids to music at a very early age. We don’t confine ourselves to one genre: We just take every idea of the song and think, ‘How best would that be served?’”

Albums
The title track for The Jolly Pops’ latest release, Bad Bad Dinosaur, was influenced in part by Hartong’s youngest daughter. “You’ll be hard-pressed to find a kid who, if you mention dinosaurs, doesn’t light up. I thought, ‘What if a kid dug up a rock outside, and it ended up being a dinosaur egg? Then it grows up and it starts chasing him around the house.’

“I started telling the story to my 4-year-old, and then I started pretending that I was the dinosaur biting her arm. She turned to me and said, ‘Daddy, I am not food.’ That was the lyric I needed.”

Watch the video for The Jolly Pops’ “I Want a Puppy” here.