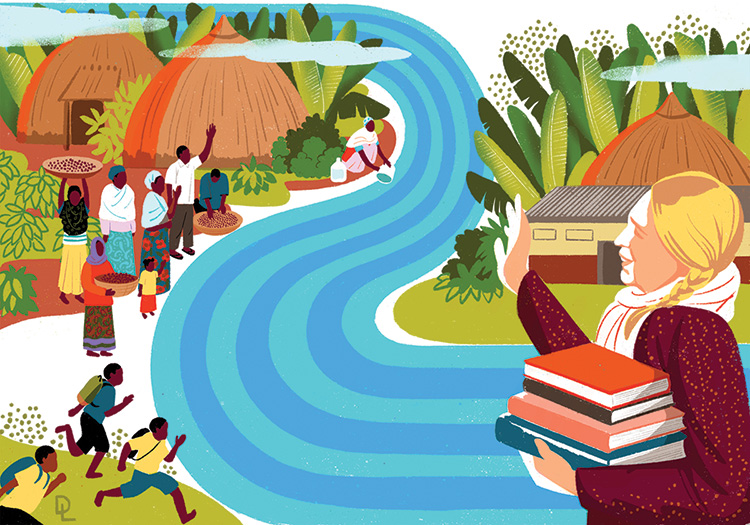 With her nonprofit Common River, Donna Sillan ’80 has created a model for development done right.

Donna Sillan ’80 had just finished a trip to Ethiopia in 2006 when she felt it was time for a change. She had been there to help friends adopt two orphans, lending her international public health expertise and experience from adopting her Vietnamese daughter. Sillan has worked in more than 40 developing countries, but rarely visits the same place twice. Her sister told her, “You’re like a tumbleweed blowing around the planet; you should find a village,” Sillan remembers. “But this was the sacrifice I’d made. You’re a stranger in a strange land, and you have to hit the ground working.”

When Sillan returned from Ethiopia to her home outside San Francisco, another friend introduced her to an Ethiopian man named Tsegaye Bekele at a local café. As they started talking, she discovered he was from the same village, Aleta Wondo, as her friend’s newly adopted children. A building contractor, Bekele wanted to help his village, but didn’t know where to begin. The two decided to pool their expertise and start the nonprofit Common River. Since then, they have transformed Aleta Wondo, building a school, an organic coffee plantation, a working farm, and a volunteer eco-lodge to create a sustainable, self-reliant community.

An international relations major at Colgate, Sillan remembers when news broke about the Vietnamese boat people, who were fleeing their country to seek asylum in the United States. “I was horrified,” she says. She went home to San Jose, Calif., for her January Plan and volunteered for International Rescue Committee (IRC), resettling newly arrived refugees.

After graduation, Sillan went back to work at IRC. She spent two years in Thai refugee camps, then earned a master’s in public health. Through a new position at Save the Children, she managed its urban health program in Indonesia. Nine years later, Sillan became an independent consultant, working everywhere from Afghanistan to Somalia.

Arriving in Aleta Wondo in 2006, Sillan and Bekele began by asking the community what they wanted. Education, the duo learned, was the people’s hope for “a way out of poverty.” Sillan and Bekele raised funds for a one-room schoolhouse, and 12 years later, the school has expanded six-fold, serving 165 students in grades K–5.

On the campus, they also planted trees. The trees are now bearing fruit, which is part of the students’ lunches, along with vegetables from the garden, honey from the hives, and milk from the cows. One day, as Sillan was training the school cooks, she noticed the women weren’t taking notes and realized they were illiterate. This inspired a literacy program that now teaches more than 150 women. “It’s been so empowering; not only are the women becoming educated, but also, their husbands respect them more.”

In addition, Sillan integrates public health into Common River. A long-standing collaboration with the University of Texas at San Antonio brings doctors and medical students for a curative health clinic and preventive medicine, saving many lives each year.

As with any organization, Common River has had challenges. A thriving effort to export local coffee was scuttled when government agents stole an entire shipment, and recent tribal violence has caused the NGO to temporarily close the school. However, the literacy program remains open due to the fervor of the women.

Even so, Sillan is proud of what they’ve accomplished on a shoestring budget and hopes it can serve as a model of community-driven development for other villages globally. As she continues to travel the planet, Sillan can be assured of one place where she’s laid down roots. “It’s been satisfying to deeper understand a community,” she says. “I’m not an external consultant; I’m a community member.”