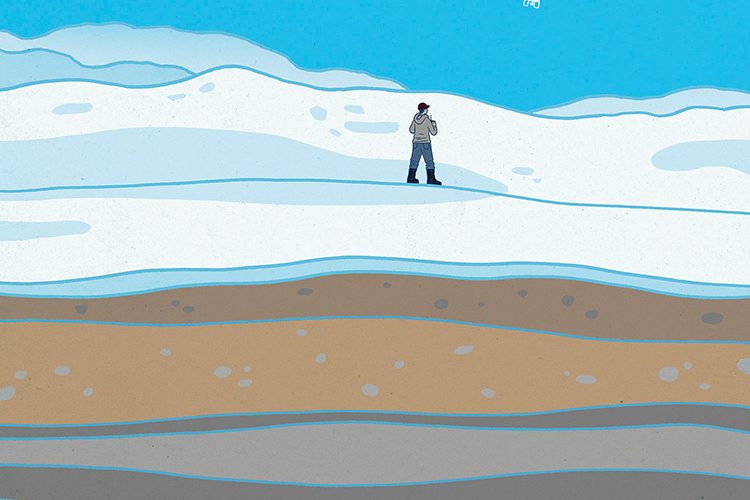 Colgate has recently received more than $1.3 million in grants for faculty research from the National Science Foundation. The research will shed light on the past, present, and future of the humans, organisms, and systems that make up our world.

People usually think Antarctica is all about ice. But for Assistant Professor of Geology Joe Levy, it’s all about soil. Levy is studying how water from the thawing permafrost is seeping into the earth and creating underground bogs and streams. When, where, and how this groundwater flows will affect the chemistry of the soil, possibly turning the dry, cold deserts green. And that will determine whether Antarctica ends up acting as a source of carbon dioxide, or a sponge.

Levy’s five-year, $500,000 grant will enable him to map changes in soil moisture on a day-to-day basis — something that’s never been done. To do this, he and his students will travel to the driest, coldest, windiest place on the continent: Antarctica’s McMurdo Dry Valleys. There they’ll spend December 2020 and January 2021 deploying unmanned aerial vehicles (UAVs) equipped with sensitive spectrometers that will measure the movement and chemistry of the underground water. They’ll also collect and analyze core samples.

This “chemical fingerprinting” will provide insight into the Dry Valleys’ changing landscape and possible effects off shore. “In the oceans around Antarctica, it’s hard for algae to make a living,” Levy says. “But if these wetlands release nutrients into the ocean, then that algae suddenly will have a lot more food to eat and can start blooming and helping the ocean suck CO2 out of the atmosphere.”

Levy is equally excited about the second component of this grant: establishing a self-sustaining “UAV Academy.” He will create courses to teach students about state-of-the-art remote sensing and train them to “become their own geoscience research pilots.” The students who accompany Levy to Antarctica will come back and teach other students how to use drones to ask questions about the earth that have not been answerable before now.

Levy is also quick to point out that this is a CAREER grant, which promotes both science and teaching. That suits the geomorphologist just fine. “Students bring an amazing perspective because they have an incredible ability to think broadly and work across disciplines,” he says. “They are indispensable partners in my research process.”

Like Levy, volcanologist Karen Harpp looks beneath the earth’s surface, but she goes a little deeper — 1,800 miles deep, to be exact. Of particular interest to Harpp is the Galápagos archipelago. These volcanic islands were formed by a mantle plume, a column of hot rock that wells up from the base of Earth’s mantle — the vast region between the crust and the core — and ultimately causes volcanic activity. The professor of geology and peace and conflict studies explains that, because we can’t dig all the way to Earth’s core, we have to learn about the inside of our planet by looking at what comes out of it. “I study the chemistry of what volcanoes erupt,” she says.

To do that, Harpp uses an inductively coupled plasma-mass spectrometer (ICP-MS). Through a three-year Major Research Instrumentation grant, she and her co-principal investigator (and former student) Alison Koleszar ’04, now a visiting assistant professor in the geology department, received $300,000 to back up Colgate’s 15-year-old ICP-MS with a new one. The instrument, which analyzes the elemental makeup of a sample, will be used to reveal what exactly is in the lava she and her students bring back from the Galápagos. Harpp has long been an ardent promoter of hands-on research for undergraduates. Most of her students have presented results of their research at major conferences and have also been co-authors on publications.

“You can talk all day, but when [students] go do the research is when it starts to matter,” Harpp says. “When you actually get to walk on the volcano, pick up the rocks, bring them back, and solve the problem yourself, that’s empowering.”

In addition to Harpp, Koleszar, and their students, Colgate professors and students working in other disciplines will use the ICP-MS in a range of studies, from determining roadside spring water quality in the Finger Lakes region to identifying Paleolithic art pigments. The instrument will also support regional research programs at other institutions.

Students are also integral to additional projects funded this summer. Physicist Rebecca Metzler received $275,000 for a $460,000 collaborative project with Gary Dickinson at the College of New Jersey to study the outer shells of barnacles. An expert in biomineralization — how an organism forms mineralized biological structures, such as teeth or shells — Metzler says that little is known about how their exoskeletons form. Understanding that could have long-term applications in dentistry, orthopaedics, and other areas where a product might form and solidify while inside the human body.

As little understood as they are, barnacles impact our world in significant ways, including economically. The crustaceans produce an incredibly strong adhesive, which they use to anchor themselves to underwater surfaces. They grow on pipes, for example, impeding proper flow, and adhere to boat hulls, creating drag and drastically running up fuel costs.

Barnacles have an ecological impact too. Because they’re filter feeders, effectively cleaning the water as they eat, they play an important role in marine ecosystems.

Metzler’s study will explore how barnacles in their larval form grow under normal conditions — and how they grow in the warmer, more acidic waters caused by climate change. Whatever they show, the findings will have implications we’ll have to contend with, Metzler says. “Are barnacles going to proliferate because of these changes in climate, which would actually cause issues economically? Or are they going to die out, which would be a concern ecologically?”

Metzler is also interested in understanding the structure of the barnacle’s exoskeleton, which is unusual among biomineralized tissues in that it’s disordered. In mother of pearl, for example, crystals arrange themselves into a brick-wall structure. But with barnacles, the distribution of crystals is haphazard: “Instead of a brick wall, here we have crystals randomly scattered throughout the structure in ways we can’t predict.”

If Metzler wrote this grant with a focus on students, it’s because early exposure to research changed her life. “I went to a liberal arts college and had a professor who asked me to do theoretical astrophysics research,” she says. “I fell in love with research. I felt it was giving me the power to ask questions. When I got my PhD, I knew I wanted to work with students and involve them in experiments that many people don’t think undergraduates can do — which they definitely can.”

Like Metzler, Jacqueline Villarrubia is interested in how things form — namely, the Centros de Apoyo Mutuo, or mutual support centers, that surfaced in Puerto Rico in the aftermath of Hurricane Maria. These community-based recovery initiatives were established when state and federal agencies failed to respond effectively to the emerging humanitarian crisis. While it’s known that they are key to disaster relief efforts, little is known about community members’ experiences with them, Villarrubia says. The sociology professor has received a three-year $82,095 grant as part of a $300,000 collaborative project with Professor Roberto Vélez-Vélez of SUNY-New Paltz to conduct qualitative research in resilience and community-rebuilding initiatives. The result, she hopes, will be policy making that shifts from the “state-centered model” to a “dialogue with government officials and community organizers on the importance of creating policies that stem from within the community.”

Meanwhile, in Colgate’s mathematics department, two professors’ innovative work is pushing the boundaries of their fields. Assistant Professor of Mathematics Joe Chen has received a $142,873 grant  to apply his expertise in microscopic probability models to large-scale phenomena such as heat flow, wave propagation, and fluid dynamics. By understanding how random walkers (particles whose paths consist of series of random steps) mutually interact on networks with self-similar or random features, Chen hopes to establish limit theorems that describe laws of nature in the form of differential equations. Some of his recent theorems — one on the abelian sandpile model and another on the Sierpinski-Hofstadter butterfly — have emerged from fruitful collaborations with Colgate’s undergraduates.

Assistant Professor of Mathematics Rob Davis received a three-year, $70,000 Algorithms for Modern Power Systems grant to apply his understanding of synchronization and convex polytopes, or polygons with flat sides and no dents, such as pyramids or cubes, to a real-world problem: stabilizing the electrical grid.

“I know a lot of uses for polytopes in other areas of mathematics. It was news to me that they could be used to study power networks,” Davis says. He and Tianran Chen, his collaborator at Auburn University at Montgomery, will use their respective geometric and numeric expertise to find ways of improving the efficiency, stability, and resilience of power networks through this $175,000 project.

In addition to producing open-source software, teaching undergraduates at both institutions is baked into the grant. “I like to expose students to new and interesting developments in my area of math,” Davis says. “There is this idea that math has to be boring and dry. In my classes and research, I tell students that, ‘You need to learn the definitions and the basic rules, but you’re never far away from something really cool.’”