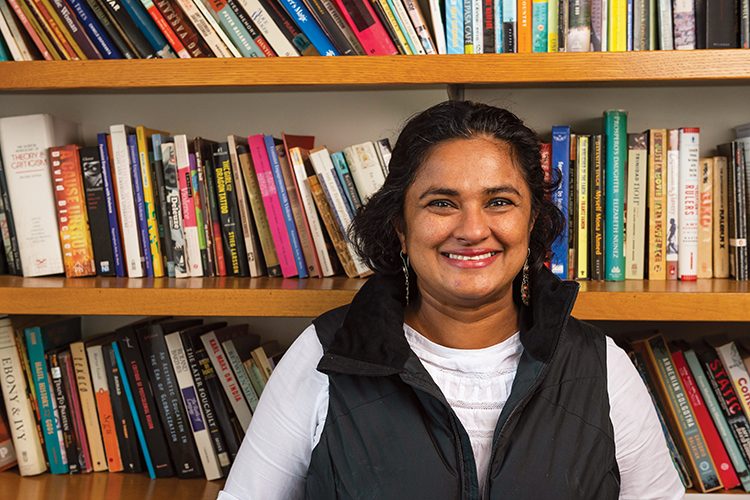 The book is about the war in Sri Lanka, which began in 1983 and ended in 2009. The war was fought between the state, controlled by the majority ethnic Sinhalese, and the separatists led by the Tamil Tigers, who claimed to represent all minority Tamils. Most people read the war as a struggle between a racist majority and a minority group, but, as I argue in the book, globalization and free markets have impacted that process. In 1977, the United National Party came to power and opened the economy toward neoliberalism or free markets. So, Assembling Ethnicities tracks how economic reforms and nationalism were entangled in one another during the war.

I address this by turning to fiction — be it novels, theater, cultural festivals, art, or films — because it can make us think about issues through imaginative uses of language and the creation of possible worlds. In my book, I develop the term  “ethnographic fictions” to insist that some fictions are also invested in documenting the external world, and making important observations about the social reality.

I grew up in Sri Lanka during the war. My mother is Sinhalese; my father is Tamil. I was an ethnically mixed child living in Colombo when it was being transformed into a garrison city. While I grew up largely with my mother’s side of the family, I was clearly not Sinhalese, and as the war progressed, Tamils were increasingly marginalized. People around me became increasingly nationalist and insensitive to minorities. One reason for this was that Colombo would be bombed by militants, but the other reason was that the changing economy impacted people’s sense of security. Tamils were often scapegoated. It was easy for political leaders and nationalists to blame minorities for issues that had to do with neoliberalism and economics — much the way immigrants are blamed for economic inequalities in the U.S. today.

Fiction, for me, has always been about social change and an index for registering the aspirations and desires of a given society. My interest in theater and performance has meant that I use intense close reading — very much what we do in literary studies — and extensive fieldwork. For example, I spent a year in Sri Lanka’s Free Trade Zones (where sweatshops are), where 85% of the workers are women. I was with a group of workers who produced theater about their lives. As I went for rehearsals, hung out with them, and spent some time in a factory, I came to appreciate their keen consciousness about how they’re being exploited in the factories. But I realized that they never talked about minorities. These women are so politically aware about issues of gender and class, but they weren’t critically talking about Tamils who were also suffering, in different ways during the war. This is when I also started asking why there were so few minority women in the zones. I came to realize that labor zones were set up in Sinhalese areas, to employ Sinhalese only, to produce a working class that was nationalist rather than critical of the war. So, in this way, corporations and an ethno-nationalist state colluded to produce a new working class that was Sinhala in ethnicity and sensibility.

As a professor, one of my main aims is to get students who have never had experiences we’re reading about to have empathy for people from different places. Fiction is a powerful tool for doing this. I teach about the global south, and I think the radical empathy necessary for a planetary consciousness can be developed in profound ways through fiction.