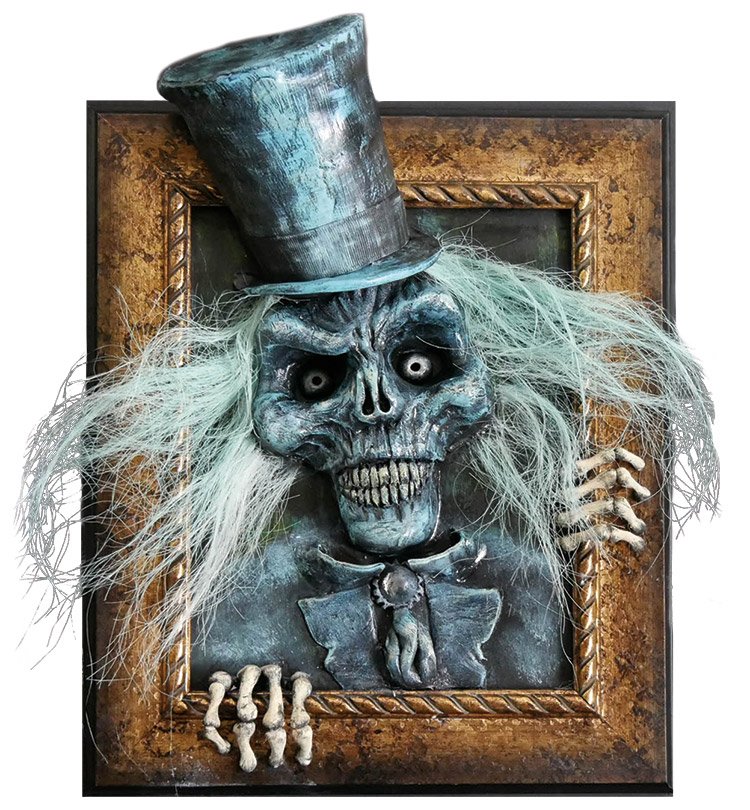 Armed with clay, aluminum foil, and faux hair, Brenda Killackey-Jones ’96 went in for the kill.

Her prey was already dead.

The Hatbox Ghost, a popular figure in Disneyland and Disney World’s famed Haunted Mansion ride, served as inspiration for one of Killackey-Jones’ latest sculptures. She recreated the spirit into a hanging piece, which she entered in Disney’s D23 Expo Design Challenge. Deemed frightening enough to be a finalist, her version of the ghoul was displayed at the fan convention in August.

“[The Hatbox Ghost] is a funky character — it’s one of the ones that everybody talks about,” she says.

A sculptor for the past five years, Killackey-Jones hones her craft preparing what she calls “mythological taxidermy” to sell at Renaissance festivals and Comic Cons. Ranging from emerald dragon heads to yeti busts, the pieces hang on walls for easy display. She came up with the moniker because she uses traditional taxidermy foam to make her figures. “I carved their faces, then re-sculpted it either as a dragon, a werewolf, or whatever I wanted it to be. It would end up looking like a taxidermy form,” she says. “It was taxidermy, but it was mythological creatures.”

Like the animatronic Hatbox Ghost in the Haunted Mansion, Killackey-Jones’ sculpted version leaps out at the viewer, but key differences show her creative hand. The original figure uses lighting to trick riders, first appearing with his head on straight, then with his head removed, resting in a hat box. Because she had size limitations for D23, Killackey-Jones eliminated the hatbox, choosing instead to give the top hat more play. “There are certain attributes that make the Hatbox Ghost recognizable,” she says. “[I had to] take the facial features and the eyes and the skeletal hands and then make them work within the constraints of the particular frame.”

After showing her piece at D23, Killackey-Jones went back to her home in Rochester, N.Y., to prepare for her next supernatural event: Halloween.

“Halloween is our favorite season,” she says. “We’ve got all sorts of things that I’ve made, like all of the creatures from The Nightmare Before Christmas in life size.”