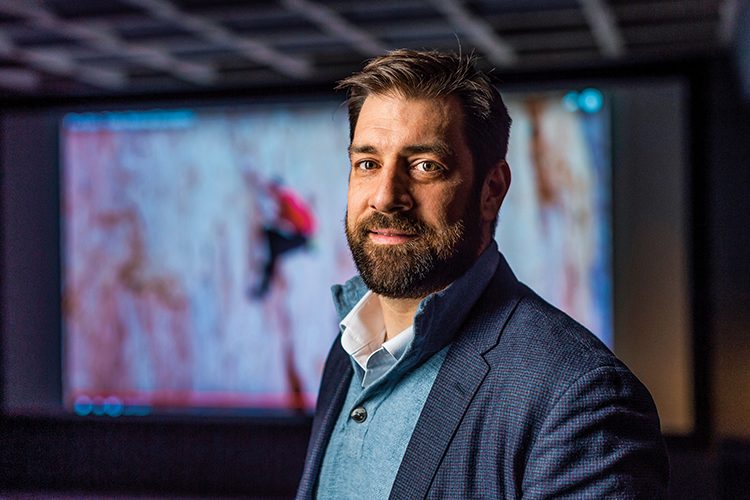 It was a matter of life and death.

Alex Honnold was climbing a 3,000-foot, million-year-old vertical slab of granite, without a rope. Meanwhile, Matt Renner ’01 waited on his couch in a New York City suburb, sweating and panicking.

“I was thinking, if he’s successful, he will have potentially achieved one of the most inspiring athletic feats in the history of humankind,” Renner says.

At only 40, Renner is a multiple Emmy Award–winning TV and film producer currently serving as vice president of production for National Geographic. His latest film, Free Solo, won the Academy Award for Best Documentary Feature in 2019. The film chronicles Honnold’s death-defying journey as he prepared to scale Yosemite’s El Capitan, free of any harnesses or ropes.

“Most free soloists have talked about how it’s just for themselves, and they’re not doing it for a photographer,” Renner says. “We had to embrace the ethical debate about filming it and do it honestly and deliberately.”

During the climb, Renner wasn’t on the ground with the production crew — only a handful of people were near Honnold, including directors Jimmy Chin and Elizabeth Chai Vasarhelyi. Too many observers could create a mental block for the climber.

As an executive producer, Renner was the hand that guided the story of Honnold’s climb. He and his team set out to tell a story fit for a mass audience, rather than a niche extreme sports film.

Many people don’t understand how Honnold could free solo. But Renner can. He knows how much passion Honnold has for the sport and how he lives in the moment while inspiring other climbers. Honnold had a story that needed to be told.

The team needed to make strategic decisions in order to make the film relatable. Some of those choices: including a love interest to give the film more emotion and exploring Honnold’s cognitive ability to explain his sometimes-coarse personality.

Renner describes himself as someone who’s calm in the face of intense pressure. But the weekend Honnold started climbing El Cap, Renner was a nervous wreck. He knew that this man, whom he had come to know intimately through the documentary process, might die. “There are some things that are so far outside of his control, even on his best day,” Renner says. “It wasn’t until I got the phone call that he was on the top of the mountain [that] I relaxed.”