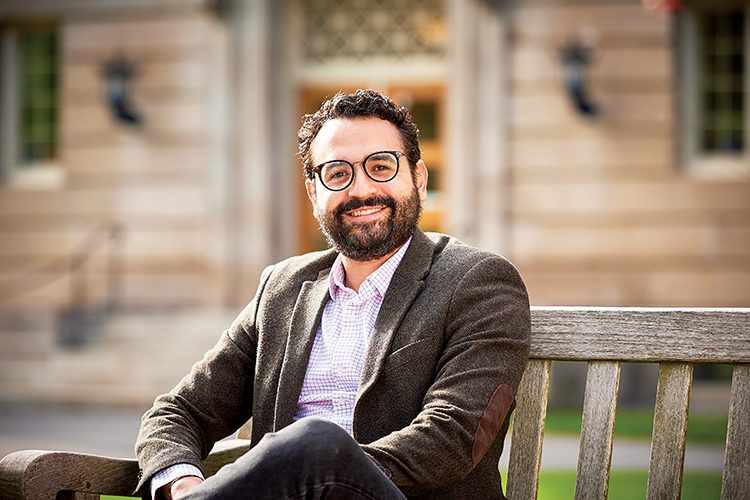 A decade ago, Javier Padilla ’10 took modernist poetry courses, studied Celtic literature, and went on an extended study trip to Ireland as a Colgate student. He majored in English, writing his honors thesis with professors Michael Coyle and Peter Balakian.

Today, Padilla resides across the street from where he lived his senior year — only now, he’s an assistant professor of English and calls his undergraduate advisers his colleagues.

Padilla joined Colgate’s faculty last fall,  specializing in Irish and postcolonial literature. This spring, he taught the first iteration of the course Ireland: An Introduction to Irish Studies, which showcases Irish writers, playwrights, and poets from the 19th century.

“My expertise is poetry,” Padilla says. “I love close reading and how a poem can be such a rich vehicle of cultural expression.”

Born in Nicaragua, Padilla has always been infatuated by the interactions among literature, language, and culture. “One of the clichés about Nicaragua is that it produces a lot of writers; it’s a poet-heavy culture,” Padilla says. “I started writing poetry at a young age.”

He applied to college in the United States, inspired by the likes of Allen Ginsberg and Sylvia Plath. At Colgate, a sophomore-year trip to Ireland with Coyle and Professor Morgan Davies fostered Padilla’s interests in that country.

“I fell in love with Irish culture, and the late-blooming nationalism really spoke to me,” he says. “I saw a lot of similarities between Nicaragua and Ireland in so far as they are both extremely literary cultures.”

After graduation, Padilla attended Princeton University to earn his master’s degree and was awarded a summer fellowship endowment to study W.B. Yeats in Ireland. When he returned to Princeton as a PhD candidate, Padilla wrote the first chapter of his dissertation on Ireland. His first published academic articles also addressed modernity and colonial mentalities through Yeats’s poetry.

Through Colgate’s Inventing Ireland course, Padilla continues to explore these themes. He emphasizes how the literature’s nationalist sentiments helped Ireland maintain its own cultural identity in the midst of a struggle for self-governance and Britain’s colonial presence. “The Irish Literary Revival was important not just for Ireland, but also for other countries in the throes of colonialism — African countries and Latin American countries,” Padilla says.

The first part of his course shows how modern Irish literature is bringing back old works. “There’s this continuity in which even after the Irish language was snuffed out, it was revived. After all these Celtic legends started to disappear, they were revived,” he says.

Padilla hopes the class will eventually include the extended study trip to Ireland that he once participated in. He hopes students can experience the importance of Irish literature in the age of Brexit, where the border between the Irish Republic and Northern Ireland is a contested issue and colonial mentalities remain.

“Literature is an ongoing experience,” Padilla says. “All these problems that are part of Irish history are still with us.”

Yeats addressed these problems by envisioning Ireland as a place of enlightenment in “Into the Twilight,” writing, “Come, heart, where hill is heaped upon hill.” As for Padilla, he has returned to Colgate’s beloved hill to contribute to a community of learning and revive his own history.