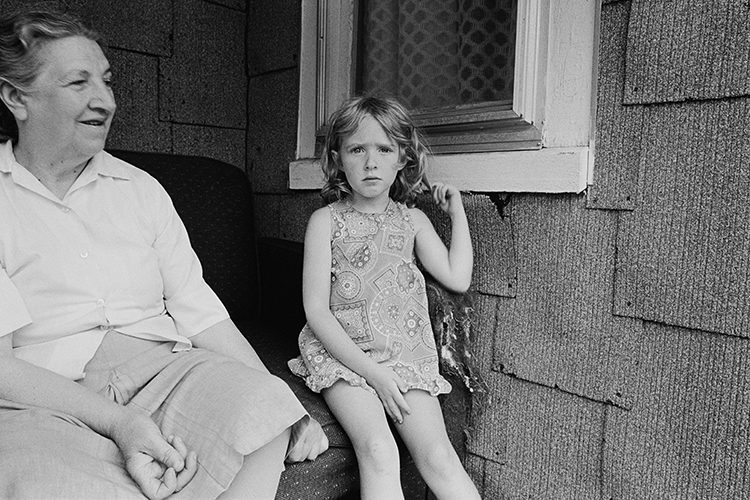 Nestled among Picassos, Pollocks, and Kandinskys at Utica’s Munson-Williams-Proctor Art Museum, a room is dedicated to the Tommy Brown: Upstate exhibition. The retrospective of work by Tommy Brown ’79 includes photographs of upstate New York spanning the last 40 years: snapshots of children in front of proud, wooden barns; robust farm animals; and striking rural landscapes through the seasons.

Although Brown spent time in New York City after graduating from Colgate, he eventually returned to central New York and settled in Sherburne, just 15 minutes from his hometown of Norwich. He says 95 percent of the photographs in the show were taken within 10 miles of his home, and he never set out with a specific theme in mind.

“When I make pictures, it is just whatever I am doing at the time,” Brown says. “I never wanted it to be work.”

As an art major, Brown did not take photography until his senior year at Colgate. However, he was immediately serious about making it his career. He saved up money working at his father’s machine shop to travel across Europe to make pictures, hoping these images would serve as his gateway into an MFA photography program.

Brown was resilient in pursuing his passion, which is a necessary attitude for a career in the arts. After his belongings were stolen in Portugal, he took pictures in Italy using a borrowed camera. One of those photos, Siena, is what helped him be one of only seven students accepted into the photography program at the Yale University School of Art. Siena now serves as an introduction piece in the exhibition’s pamphlet.

Nowadays, Brown doesn’t travel for his shots — unless it’s to the county fair or to see his son in Brooklyn. In fact, he met Munson-Williams-Proctor Curator Mary Murray by partaking in one of the museum’s shows for regional artists 30 years ago. He remained friends with Murray, and two years ago, she approached Brown about doing his own show. Murray chose 42 of his pieces, showcasing the intense stares of a young girl on a porch and an elderly man resting on his walker, a troupe of stoic deer hunters and a lively bar singer, and scenes depicting sunlit corn fields and snow-covered horizons. The pictures vary greatly; in black-and-white and in color, their bold characters and humbling natural beauty are the only uniting features.

“I always have something to say, even when my pictures look simple,” Brown says.