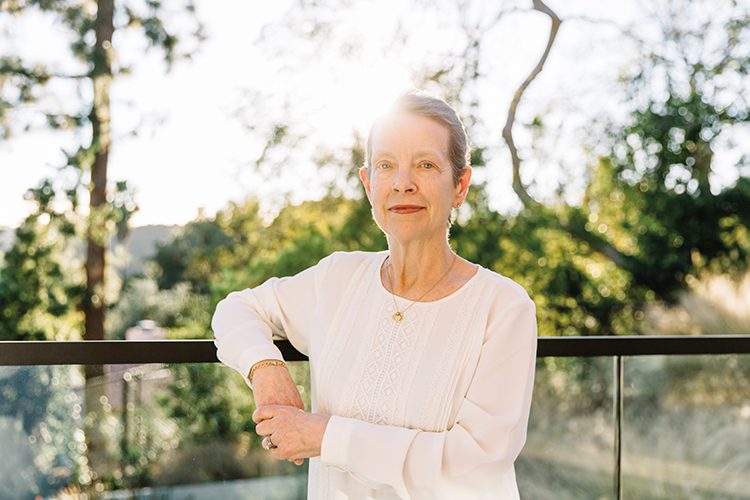 I approached the door of the intensive care unit, wondering if I should turn around and flee. After what I survived here, would I fall apart entering? I rang the bell and waited.

Several decades earlier, I had graduated from Colgate and started my career at a financial software company in Los Angeles. I worked there for more than 20 years and had become president of the firm. My husband of 20 years, Ben, and I had a young son. All in all, I was content with my life and felt fulfilled.

But on April 14, 2006 (Good Friday, no less), I was diagnosed with incurable stage IV follicular non-Hodgkin lymphoma. My son, Gus, was in kindergarten. I asked myself, how could Gus lose his mom when he was only 6 years old?

From that day on, I was on a mission to stay alive. The treatment options at the time were few, lacked effectiveness, and had difficult side effects. In May 2006, I began brute force chemotherapy hoping for an extended remission. I relapsed two months after the treatment. My prognosis was now even worse.

Over the next 12 years, I had five more treatments, which brought new side effects. None of these treatments fully eliminated the cancer, and any reduction in tumor size was short lived. What these treatments did do for me was buy more time for researchers to make progress on additional options. By 2017, I had relapsed for the sixth time with extensive disease, which was affecting my organs. There were no treatments left and no way to survive without something new.

In April 2018, I was out walking when a phone call with breakthrough news came from my oncologist at UCLA, Sven de Vos. He told me that the treatment I had been closely watching for six years, an immunotherapy called CAR-T (chimeric antigen receptor T-cell therapy), was now available for me in a Phase I clinical trial. I hung up the phone with a newfound excitement; maybe I could beat the disease after all. CAR-T is revolutionary because it relies only on the patient’s immune system to destroy the cancer and no man-made drugs are involved, a significant step forward. Older therapies, such as chemotherapy, attack and damage every cell, even the healthy ones, whereas CAR-T only attacks the malignant cells and leaves healthy cells alone. There would be no long-term side effects from the CAR-T treatment. The UCLA Medical Center had five open spots in the trial. I was the leading guinea pig.

I won’t pretend it was a walk in the park. Commencing mid-June, I was in the hospital for 36 days, 25 of which were spent in the ICU. Due to multiple brain seizures, I was placed in a medically induced coma. Because the CAR-T cells are able to cross the blood brain barrier, my brain became inflamed, and I experienced terrifying hallucinations — more than 30, including four where I had died and was being buried. In another hallucination, Dr. de Vos told me he had learned the trial was a hoax and then he shot himself and leveled the gun on me.

My brain function was monitored every minute; the doctors and nurses did not know if I would be brain dead when I was eased out of the coma. But when I became conscious 10 days later, it was clear my brain would be fine. More importantly, the CAR-T had eliminated all the malignancy in my body — more than 9 pounds of tumor burden. For the first time since 2006, I was cancer free.

Through it all, I had attempted to maintain a positive outlook, but each time I relapsed, my positivity would take a hit. While I was declared in complete remission in August, the emotional baggage of fighting this for almost 13 years was still heavy. With all the disappointment over the years, I thought, why would this time be any different? Due to the number of seizures I had experienced in the hospital, I was still on anti-seizure medicines, which can cause depression; I also faced physical challenges resulting from the duration of my hospital stay. I had lost 30 pounds, couldn’t walk, and had no physical strength in my arms or legs.

So, when I returned home in August, I had to rebuild, mentally and physically. I began to relearn the basic skills I had lost during my hospital stay: walking, driving, and thinking clearly.

One early morning I attempted my first post-CAR-T hike. We live in a canyon in the Hollywood Hills with a nature trail adjacent to our home. As I headed out, I noticed a coyote standing 20 feet from the driveway, contemplating me. I immediately thought, “Is it possible I survived CAR-T only to be eaten by COYO-T?” Thankfully, the coyote trotted off in search of more appetizing fare.

A couple of days later, I woke up inspired to visit the ICU and stem cell transplant floors where I spent my hospital time so I could thank the staff. When I rang the ICU bell, a nurse aide named Mia opened the door. Although she was the woman who had given me sponge baths, she did not recognize me. When I told her who I was, she started to cry with happiness that I was alive and doing so much better than when she last saw me. I also visited several doctors, nurse practitioners, nurses, and techs who had kept me alive and did so in the most caring way. Upon my return, they all initially looked at me with no recognition in their eyes, and I had to tell them who I was. They were also excited to witness my progress. I plan to visit again because it was fulfilling for me to express my gratitude to them. The ICU staff members rarely know what becomes of the people they care for — many die after leaving the ICU, and those who survive typically choose not to return.

My recovery continues along with my nonstop optimism. I have set a lofty intention for spring 2020 to climb to the Mount Everest Base Camp with a group to raise money for the Leukemia and Lymphoma Society. Stay tuned!