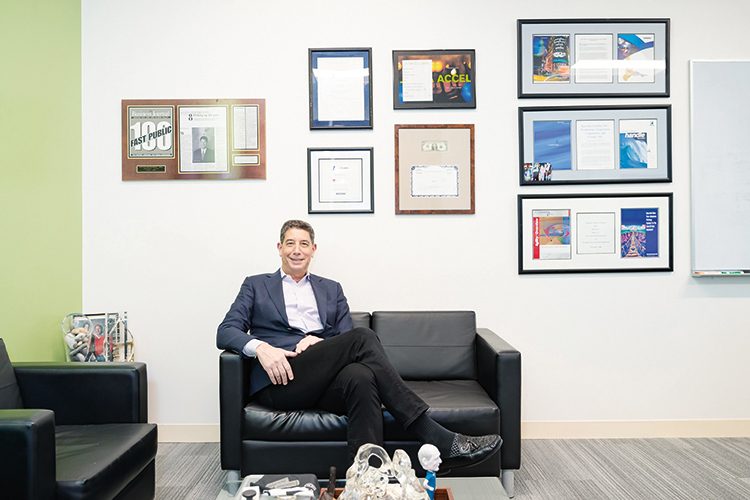 Opioids — legal and illegal — kill more than 130 Americans per day. According to the Department of Health and Human Services, 11.4 percent of people who are prescribed pain medications abuse those prescriptions. Eventually, many patients move on to more dangerous drugs like heroin and fentanyl, which often ends in overdose.

But what if there were a better way to move patients off prescription painkillers — not toward dangerous street drugs, but toward a pain-free life? That’s the idea behind iFuse, a new surgical implant product from SI-BONE, the medical device company founded and run by Jeff Dunn ’76. A recent independent clinical study published in the journal Neurosurgery showed that, compared to patients who chose conservative management, like painkillers and rest, back pain patients who underwent iFuse treatment were 11 times less likely to be opioid users after six years or their last doctor’s visit. Such has been iFuse’s success in minimizing chronic sacroiliac joint back pain for patients who receive the implant — which also has the power to save lives from overdose.

Most of Dunn’s business history is in the technology sector, not health care. After majoring in political science at Colgate, he helped start the first software store in America. “We built six retail software stores when everyone said, ‘Why would you need a PC in your house?’” Dunn says. “I’ve done a lot of things in my career where people said, ‘That’s ridiculous,’ and it turned out to be quite interesting.”

Other highlights of Dunn’s career leading up to SI-BONE include work in the optical robotics and computer graphics fields. He has started five companies and served as CEO of seven. “I have seen a lot of different technologies and marketing strategies,” he says. “That enabled me, when I got into the medical field, to apply different strategies that have been used in all kinds of technology areas.”

SI-BONE started as a spin-off of an ankle replacement company that Dunn ran as CEO and sold in the mid-2000s. After tackling the ankle joint, Dunn and orthopedic surgeon/inventor Mark Reilly moved on to the lower back — specifically, the sacroiliac or SI joint. “It’s the largest joint in your body,” Dunn says. “That joint is responsible for twenty percent of all lower back pain, but no one could figure out the diagnosis and treatment before we came on the scene.”

Previous SI joint surgeries required 6- to 8-inch incisions and caused significant blood loss, according to Dunn. The iFuse can be implanted with just an inch and a half incision. “In forty-five minutes, we fuse the joint with a 3-D–printed triangular implant, which takes away the micro-motion causing pain,” Dunn explains. “As a result, we change these people’s lives. We’ve had people go from being in a wheelchair to going water-skiing, running dogs in the Iditarod, or running a marathon.”

So far, SI-BONE has served 36,000 patients in 34 countries around the world. There is still room to grow, Dunn says, because many doctors don’t know that an implant solution for the SI joint now exists. “We’ve educated a lot, but we have a long way to go,” he says.