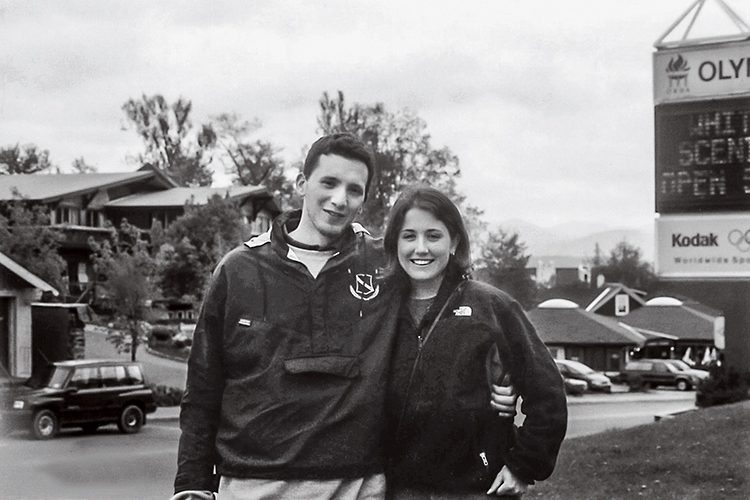 Now They’re in the Same Boat

“Maybe you should think about being a coxswain instead?” That’s what a coach suggested to me after the interest meeting for Colgate’s rowing club in the fall of 1996. At 5’1″ tall — not exactly the ideal rower’s height from a coach’s perspective — I took his advice and became one of three female coxswains on the men’s team. Every year for the next four years, our team was bolstered with a new crop of overly confident first-years. My future husband, Yariv Amir ’01, and his classmates were no exception.

My relationship with Yariv started in turbulent waters; we were in competing boats. He was in the heavyweight eight, so with height and size on their side, their boat was expected to overtake the lightweight eight that I coxed. Each practice would involve friendly — and not-so-friendly — banter between our two boats. Yariv and I were engulfed in the feud. But, in the end, we all knew we were pushing each other to be our best.

Fast forwarding to my senior year, I was at a party at Yariv’s apartment. In the days before widespread cell phone use, I decided to brave the snow to try to find my friend at a different party. Yariv offered to come with me, even though his apartment was hosting the largest turnout Birch 9 had ever seen. We didn’t end up finding my friend that night, but we had a great night of talking as we walked around campus. Ironically, we never walked down Willow Path.

Yariv and I have been able to walk Willow Path many times since we moved back to Hamilton four years ago with our two daughters. He has worked in Colgate athletics since he graduated and is now senior associate director of athletics. After teaching French for 15 years, I joined alumni relations as an assistant director two years ago. My father, Robert Wood ’72, and my mother, Deany, recently moved to Hamilton to be closer to their grandchildren.

We enjoy living and raising our family here. Our house sits on a hill behind the Hamilton Inn, so we often hear the rowing teams practicing on Lake Moraine. The sound of the oarlocks and the barking of the coxswain over the microphone are great memories of how we met.