The A-Z on RBG: Julie Cohen ’86 does biopic justice to Ruth Bader Ginsburg 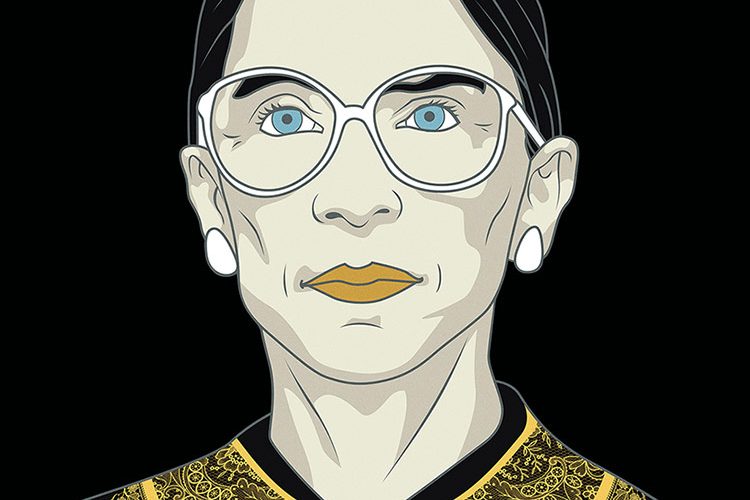 She may be diminutive in physical stature, but Supreme Court Justice Ruth Bader Ginsburg — a.k.a. Notorious RBG — has become a huge pop icon.

How did this distinguished dissenter become the subject of internet memes, a Saturday Night Live skit, an action figure, and crowds of adoring millennial feminists?

With the recent biopic RBG, filmmakers Julie Cohen ’86 and Betsy West show how Ginsburg was breaking glass ceilings before that was even a thing.

“Women sticking up for their own rights — that’s a message Ruth Bader Ginsburg was spreading way before it was popular,” Cohen says. “At the time, the idea that women not only should be treated equally but also that the Constitution protects their equal treatment was incredibly radical.”

It’s a story people want to hear. At press time, RBG was climbing the list of top 25 highest-grossing documentaries of all time, bringing in $12 million. The film also was praised by critics. The New York Times described it as “loving and informative.” Cohen and West have been tapped for interviews by every major media outlet.

“That people are celebrating her for her lifelong persistence and her intellect, and that people are idolizing an 85-year-old woman — I think that’s so cool.”

“We had high expectations, and it exceeded all of them,” says Cohen, a three-time Emmy Award winner who had a long career at Dateline NBC before starting her own production company, BetterThanFiction.

The film premiered at Sundance in January 2018 and hit theaters last May — perfect timing as Ginsburg’s popularity soars and the #MeToo and Time’s Up movements have risen.

Fittingly, women were the key figures in bringing the documentary to life. Female CNN Films executives signed on as producing partners and provided financial backing. The crew also was predominantly women. “Since we were making a film about a woman who had spent her career focusing on the rights of women, it seemed like a natural extension to involve as many women as possible in the top positions,” Cohen says.

RBG follows Ginsburg’s hard-fought path from law school, to balancing a career and family, to working for the ACLU Women’s Rights Project, to her nomination as a Supreme Court justice. It tells the touching love story between Ginsburg and her supportive husband, Martin. And it humanizes Ginsburg even further by letting the audience into her personal life, including moments with her granddaughter, a peek at her lace collar collection, and footage of her famous, butt-kicking workout.

The film also outlines the factors that contributed to this cultural phenomenon — starting with Ginsburg’s professional reputation and growing with the social media groundswell that resulted in the book Notorious RBG (2015, Dey Street Books).

“That people are celebrating her for her lifelong persistence and her intellect, and that people are idolizing an 85-year-old woman — I think that’s so cool,” Cohen says.