Pick Up Your Pens 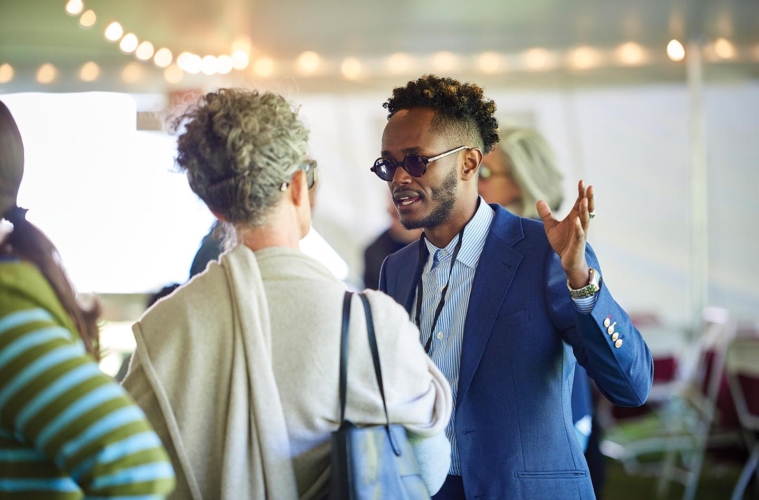 More than 110 aspiring and published authors — alumni, parents, students, employees, local residents, and visitors from across the country — were on campus in June for the 27th annual Colgate Writers Conference. The event was spearheaded by Associate Professor of English Jennifer Brice, with assistance from four undergraduate Creative Writing Fellows.

The theme of the conference rested on a series of questions: In times of crisis, where is the writer? How do writers in various genres respond to real-world crises? What’s the difference between art and journalism; art and activism? Or is there any difference at all? How have the crises of the last few years affected our writing?

One participant, Solomon Tesfaye ’15, is a first-generation graduate from Colgate, where he majored in behavioral neuroscience and minored in Islamic studies. After graduation he went on to work for a strategy and market research consulting firm in Boston. He then left to pursue a master’s degree in public policy and development economics from Princeton University. He currently works at a consulting firm in Washington, D.C., delivering insights to executives.

I’m an Ethiopian refugee, born and raised in a refugee camp in Yemen. I’ve been extremely lucky to have come to America and get some of the best education the world has to offer.

Where I come from, people don’t really have the opportunity to engage with literature. (That’s a privilege that my parents and my education afforded me.) And when they do, they don’t recognize themselves in the characters of mainstream literary fiction. I don’t either. I think that a book written by us, for us (refugees), could make readership more inclusive. I want others like me to have the option to go to a bookstore and say, “That sounds just like me.” Or, “This reads like something my mom would say!”

This is why I’m working on this novel and trying to find a publisher to save our stories from the sea of forgotten tales and make our stories come
to life.

Here’s an excerpt from Tesfaye’s novel:

Parable of the Children in The Field

A foreigner should be well-behaved.

Life as a refugee in Yemen, or anywhere for that matter, is like tiptoeing across a crumbling bridge in the dark and trying not to draw attention to the fact that you’re stuck between nowhere and forever, as you navigate your way to steadier shores. You keep trying to see where you are but the darkness around you keeps you from seeing. And you have no way of knowing what threat lurks with each step you take forward. The not knowing is what makes you so afraid.

One day you decide to stop moving forward and you learn how to live off of memories. Right there where you stand.

Here, in the camps, it is hard to live. But everyone fights to keep on living.

It was here, in the camps, that Dawit’s parents met. And they were fighting for more than just their own lives.

His mother had only been married to his father for three months before he was born. When she arrived at the camp, she had many suitors; navy men, Yemeni’s from town, and men who’d barely escaped death, like his father. But to her, there was no one she loved like his father – the kindest man she had ever met, she said once. And yet she made him beg and petition for months before she finally chose him. She had him on his knees in the rain like some shit out of The Notebook, except the rain his father felt were his mother’s tears. She was a proud woman but life was cold, and dark, and dreary in the camps. She was probably glad that she didn’t have to go through it alone anymore. A woman by herself didn’t stand much chance.

Since his father didn’t have the money for it, he proposed with a ring that he’d carved from a tree branch. She didn’t wear it often because it pricked her finger, and it was too small—an unwelcome reminder of how much weight she’d put on during the pregnancy.

Dawit’s parents never talked about those days, but his mother must have been in a permanent state of fear. The days were long, but the cold nights were always longer, and children were the most vulnerable because they needed protection.

The camp was small, crowded, and constantly smelled like something was rotting away. To get food, you had to join a big queue and the more crowded the camp got, the less food there was to go around. His parents went from eating three times a day to just having one meal, and even then, they didn’t eat much. They gave all that they had to Dawit and starved themselves for more nights than they were willing to admit to him.

The summer months were always unbearable. Sheets of hot light penetrated through the lines of thick bamboo that made up the walls of his parents’ tent. The tent was held up by three tree poles and covered with white polyester canvas sheeting with the UN brand at the front, and on the sides—turning their homes into a full-blown advertisement campaign for the nech faranjoch, or the white foreigners, as his uncles liked to call the UN employees; they emphasized the white part.

The torn up covering on the side and roof of the tent made the whole tent look like it was Yeezy inspired. Everything that goes on inside it was open to the world because the flaps won’t close.