Marveling at the Universe Together 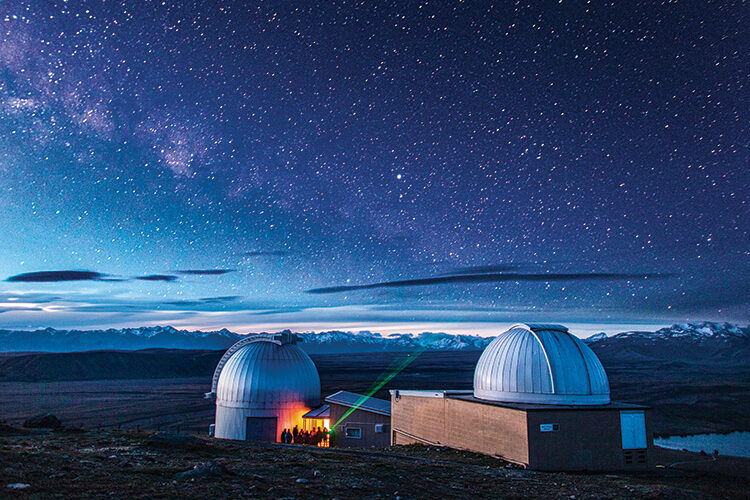 Alina Sabyr ’19 travels the world to study the power of looking up.

Why should we look at the sky? This was the question I set out to answer when I embarked on a yearlong independent expedition in the summer of 2019, supported by a Thomas J. Watson Fellowship.

As an undergraduate student, I saw how looking at the sky connects people and inspires scientific curiosity: I went on a solar eclipse trip, helped lead open-house nights at the Foggy Bottom Observatory, spent evenings of astrophotography with Star ’Gate club, and worked at the Ho Tung Visualization Lab. These experiences showed me how much astronomy has the power to inspire humility, spark meaningful conversations, and encourage us to be present in the moment.

Although we don’t have the strong connection with the sky that our ancestors did while navigating, timekeeping, and living by the stars, we still gaze at the sky in our modern society. This motivated me to explore the role of astronomy and sky-watching around the world to learn how cultural heritage and national identity affect the sky-watching practices in each place today.

I arrived in New Zealand at the end of June, just in time for the Matariki festival. These celebrations across the country signal the start of the Māori New Year marked by the rise of the Matariki (the group of stars also known as the Seven Sisters) in the sky. There are fireworks, concerts, exhibitions, lectures, and even stargazing boat tours. In Auckland, I saw how these events — attended by people of all ethnicities and ages — created a sense of community that I could not have imagined possible in such a big and spread-out city. It was uplifting to see a festival that brought the country together.

New Zealand is also known for its pristine dark skies, so I visited the Aoraki Mackenzie International Dark Sky Reserve, where light pollution is strictly controlled. The locals help keep the skies dark, astronomy guides contribute to telescope observing, the observatory provides stargazing tours, and astro-tourism helps the small town of Tekapo’s economy. Most visitors are overseas tourists, and the company’s motivation is to share the night sky with those who have never seen a starry sky. During the tours, I could hear the happy exclamations of tourists who haven’t gazed upon the Milky Way before.

While in Auckland, I volunteered at the Stardome Observatory and Planetarium, where outdoor observing is led by both workers and volunteers. The volunteers have diverse backgrounds — from those with a physics degree to people who just enjoyed astronomy growing up. This friendly atmosphere allows people who have a passion for astronomy to pursue their interest.

In London, a city of many lights, I was inspired to see the numerous opportunities to connect with the sky. People can go stargazing at the Hampstead Observatory with the Hampstead Scientific Society or Regents Park with the Baker Street Irregular Astronomers. They can borrow telescopes from Westminster library, join the programs at the Royal Observatory Greenwich, learn from classes and events at the Royal Astronomical Society, and more.

The Royal Observatory Greenwich offers observing courses for adults, which are in demand. They are an example of how “learning is a lifelong process,” says Dhara Patel, one of the astronomers. The observatory’s special programs, which include stargazing, are sometimes sold out months in advance. “There’s an appetite” for looking up at the sky, Patel says. Why? Along my journey, some told me they wanted to connect with the environment more, and others said that stargazing offers something irreplaceable.

Cusco Planetarium, in Peru, is a short drive from the city center near Sacsayhuaman archaeological site and right in the ecological reserve of Llaullipata. The planetarium focuses on educating visitors about Inca astronomy. There is also a planetarium and observatory in Urubamba, a town in the Sacred Valley not far from Cusco.

Both of these centers are traveler oriented, and through my interactions with visitors, I realized how often they have never stargazed in their own countries. What is it about astronomy that makes us travel to distant places for the views of the night sky or lets us discover it for the first time? These stargazing tours allow visitors to discover an interest that they would have otherwise overlooked in their busy lives.

In Lima, Peru, I visited Planetario de Lima, located on a headland overlooking the Pacific Ocean. The director, Javier Ramirez, fondly remembers coming to this planetarium while in school and learning how to use his telescope from astronomers working there. Now he helps children who come to visit “to find a place for their questions to have answers.” His message to those visiting the planetarium is that they should not lose their “children’s spirit of curiosity.” I witnessed this happening as I heard people exclaim in excitement and laugh during planetarium shows, take pictures with alien statues in the gallery, and wait outside patiently for the next show.

I chose to visit Paraguay for two reasons: the dark skies and the Guarani astronomy. I was pleasantly surprised to learn that many people know the Guarani names and stories behind constellations and astronomical objects. For example, one of the Guarani names for the Milky Way is Mborevi Rape, which translates as the “Road of the Tapir.” The Milky Way represented a road of dry leaves that the animal Tapir would take regularly to get food and water, and these dry leaves would reflect the moonlight at night.

Visitors can learn about Guarani astronomy at the Centro de Interpretación Astronómica Buenaventura Suárez in San Cosme y Damián. Astronomy tours are combined with historical tours at the nearby Jesuit ruins. Like in Peru and New Zealand, a visitor can learn about the unique star lore of the local culture.

The local astronomy clubs left the most lasting impression on me. The societies were mostly led and organized by college students, but the events were attended by all age groups. These gatherings embody what it means to be community oriented and welcome to everyone. I will never forget moments like loading into a bus with camping gear and a crowd of strangers to stargaze together on a tiny island on Paraná River.

Shortly after I arrived in Rio de Janeiro, Brazil, everything started to close due to the pandemic. I reluctantly traveled home to Kazakhstan.

During the months I had traveled, planetariums, observatories, and other astronomy centers revealed to me places that were more than just establishments for communicating science. These various institutions — from places well equipped with the latest projectors to small observatories run by amateur astronomers — serve many functions in our society.

They provide a space for communication of the latest science in creative forms, for accurately telling history, and for celebrating cultural identities. They are also places where people who decided not to pursue astronomy professionally can engage in their interest. And the astronomy centers serve as places where people who end up pursuing scientific careers can find resources and support.

Above all, these are places where people of all backgrounds can discuss science, history, culture, and philosophy together. Although I started the year asking why we should look at the sky, my focus shifted toward understanding what astronomy brings to the world.

I returned home with a full heart as well as ideas for how we can further use these spaces to make contributions to knowledge and marvel at our universe together.

The universe is more vast than we can sometimes wrap our minds around, and we have yet to find another planet with any life. Spending three-quarters of a year looking up and talking to people about astronomy made me more deeply realize how the most precious gifts we have are each other and our time here.

Excerpted from an article in the Planetarian journal.

Alina Sabyr ’19 is a native of Kazakhstan who majored in astronomy and physics and minored in classics. Her interest in cultural astronomy was sparked by Professor Tony Aveni, who was Sabyr’s office neighbor one summer when she conducted student research. She is now an astronomy PhD student at Columbia University.