History in Action During the Pandemic 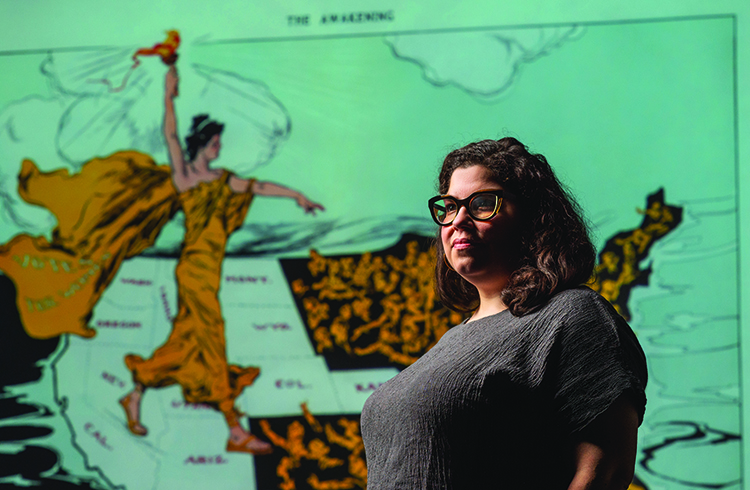 For most of her career, Professor Monica Mercado has centered her research on community. She’s traveled to convent mother houses across the United States, where Catholic sisters have made their homes since the 18th century. She’s watched how modern communities have responded to the history of women’s suffrage, and the monuments built to commemorate the early suffragists. She’s visited numerous archives to understand the ways in which 19th-century women built religious and educational communities at a time when they had little power.

But Mercado never expected her own form of community to include two dozen Zoom windows on her computer screen each morning, offering views into her students’ dorm rooms.

“I opened up my Zoom room and the first student says, ‘I got my absentee ballot and just finished it,’” Mercado says of a class that was in mid-October. “These students come in, and they’re telling me about their voting plans. It reminds me that you don’t have to do much to make history seem like it matters to their lives.”

If ever there were a year when history feels like a palpable force connecting past to present, 2020 might be it. Mercado’s work has required grappling with the 100th anniversary of the 19th Amendment, the Black Lives Matter movement, and a contentious presidential election — all during the COVID-19 pandemic.

At the start of the year, Mercado was in the middle of a yearlong fellowship at Harvard Divinity School. While there, she taught a course on women and gender in U.S. Catholicism and conducted research for her forthcoming book on American Catholic girlhoods. When Harvard’s campus closed in March, just as the deadliness of the pandemic was becoming apparent, Mercado was left wondering how to teach her Colgate students in the coming fall semester.

Sitting down to write her modified lesson plan, Mercado began thinking about how she could create a community of students who couldn’t be physically present with one another. She realized that the very women her class would be studying had made strong networks in times of great uncertainty and crisis.

“Many of the women we study were working in eras when they had to communicate across great distance,” Mercado says. “Sometimes these women marched and built community organizations, but they also had to publish letters, organize telephone hotlines, or make other connections when they couldn’t be in person.”

Normally, Mercado’s history classes visit Colgate’s Special Collections and University Archives for the visceral experience of going through old newspapers and books. This year, those in-person activities had to be put on hold. Instead, Mercado is helping her students dig into digital archives.

She’s had to apply the same digital techniques to her own research as well. Instead of attending the unveiling of a women’s rights monument in Central Park this August, she watched the event being livestreamed. Yet even with the disappointment of not participating in events in person, Mercado has appreciated the fact that women’s history has been in the zeitgeist this year.

More present than ever in her students’ minds is that the women’s suffrage movement didn’t solve all problems around voting. Mercado points to the 2018 Georgia gubernatorial election, in which Black politician Stacey Abrams narrowly lost to an opponent accused of voter suppression. Mercado also notes the challenges in early voting during the pandemic and the long lines of people who voted in person.

“We can talk about the way that the 19th Amendment did some things, but it didn’t do everything. And I think that’s been a real turn in women’s history,” Mercado says.