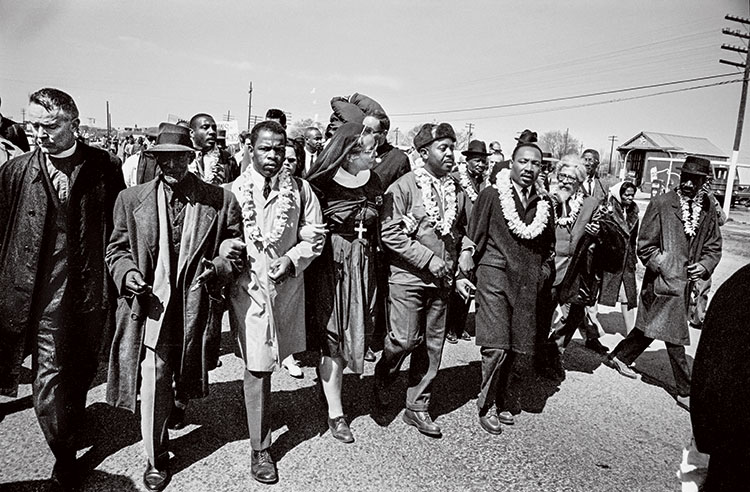 John Lewis (third from left) and Martin Luther King Jr. lead a civil rights march from Selma to Montgomery, Ala., on March 21, 1965.

For six days at the end of July 2020, I sat transfixed as four presidents (Carter, by mail; Clinton; George W. Bush; Obama) and the nation paid tribute to civil rights icon John Lewis. Like so many people, I was an ardent admirer of Congressman Lewis. Some of us in the civil rights movement knew about him because of his involvement in the sit-in demonstrations in the South starting in 1960. He became better known for his brave efforts in leading Freedom Riders on interstate bus rides. But it was on Aug. 28, 1963, at the March on Washington that millions of people heard 23-year-old John Lewis deliver a fiery speech just before Martin Luther King Jr. delivered his legendary “I Have a Dream” speech. Those two speeches roused the nation.

In 1965, I spent two of the most dramatic weeks of my life with John in Selma, Ala. I was 27 and had just finished my first 10 months as minister of Faith Presbyterian Church, a Black church in York, Pa. I was also the clergy coordinator for the State of Pennsylvania for the Southern Christian Leadership Conference (SCLC), Dr. King’s organization. In late February, I received a call from Dr. King asking if I could take a short leave of absence from my parish to help with a major voter registration drive in Selma. After getting permission from my church elders, I drove down on March 1, arrived at the Selma Motel in the Black section of town, and was given a room to share with comedian/activist Dick Gregory. The other organizers included people from SCLC and members of the Student Nonviolent Coordinating Committee (SNCC), a voter registration effort led by John. SNCC was mostly college students and veterans of the lunch counter sit-ins, with more of a youthful, militant attitude — but nonviolent. SCLC was run by activist clergy, also with a commitment to fighting racial segregation, with Christ-like and Mahatma Gandhian nonviolent tactics. Both groups needed each other to have a successful voter rights drive in Selma, and John was the bridge between the two.

Every day, several of us would pick up those who wanted to register to vote and drive them to the courthouse. As I recall, the registrar’s office was supposed to be open 9 a.m.–3 p.m. But to suppress Black potential voters from registering, it only opened randomly for approximately one hour a day, and they demanded applicants take an exam (with questions like “Name all the judges in Dallas County”) and pay a poll tax. With all that time to kill every day, John and I engaged in some interesting conversations.

We came from vastly different backgrounds. He was raised in Troy, Ala., where his parents were sharecroppers. He grew up picking cotton and caring for the livestock. That didn’t sound much like Pelham, N.Y., where my dad was a real estate broker and mom an interior decorator. But John was very warm, friendly, and curious, so together, we discovered that we had a few things in common. We had both graduated from seminary a few years before: he from American Baptist Seminary and College in Nashville, Tenn., and I from Union Theological Seminary in New York City. We had both been arrested many times in the last two years on trumped-up civil rights charges. And lastly, we both had faith and a constant vision about what interracial justice should look like. It was easy to like him, and I admired his spirit and fervor.

During that first week of trying to register Black voters, more and more people started arriving. We held meetings, including one in which Dr. King allowed me to sit in on strategy planning for a march to Montgomery, 51 miles away. But just before we planned to leave, he was called to Atlanta because J. Edgar Hoover had sent a letter and tape to Coretta Scott King, trying to discredit her husband’s leadership and morality. Back in Selma, the desire to move forward was overwhelming. The march was on, with John representing the SNCC and Hosea Williams of the SCLC drawing the short straws to lead. Dr. King, still in Atlanta, gave his approval to proceed.

In what historians now call “Bloody Sunday,” on March 7, approximately 525 to 600 of us departed from Brown Chapel African Methodist Episcopalian Church after prayers, speeches, and civil rights motivational songs. We lined up, two abreast, on the sidewalk and started off. It was only about five blocks to the foot of the Edmund Pettus Bridge. Built over the Alabama River, it had been a key route for the state’s plantation and cotton economy during slavery and Reconstruction. Edmund Pettus had been a brigadier general in the Confederate Army and the grand dragon of the Alabama KKK during the final year of Reconstruction. With that knowledge, we started over that long bridge. Reaching its apex, we could see the horrifying sight that awaited us on the east side. Approximately 150 state troopers were lined up in rows, with billy clubs and guns. Behind them, 17 more troopers sat on horseback. Out front, Sheriff Jim Clark stood with his police officers. Meanwhile, white crowds occupied both sides of the road, yelling and cursing at us. We followed John and Williams down to the end of the bridge, where we stopped. Clark announced, “You have two minutes to disperse.” We stood our ground, and John started to pray. In an instant, the troopers charged. As John turned and took a few steps, two or three troopers were immediately on him. One used a nightstick to fracture his skull. The rest of us turned and began running, but it was difficult. The marchers included many elderly people and young kids. People screamed and called out for help. I saw that people were bleeding, and the clouds of tear gas burned our eyes, noses, and throats. Many were on the ground as the troopers on horseback waded through us with whips, rubber hoses, and billy clubs.

Back at Brown Chapel, it looked like a war zone. John and nearly 100 others were taken to the hospital. Some were tended to in the church pews. People poured water over our heads and into our eyes to stop the tear gas from burning. Reporters and photographers were there, documenting the massacre. The evening news and front pages of papers shocked the world the next day.

When Dr. King saw it on TV, he returned immediately. That night, in a joint meeting between the leadership of SNCC and SCLC, we decided to march again to demand equal voting rights. We also needed more help. Dr. King asked me to spread the word to my clergy contacts in Pennsylvania and New York City, the National Council of Churches and the World Council of Churches, and rabbis, priests, and nuns via WCBS, WNBC, and WABC news stations. We wanted as many people as possible to join us on Tuesday, March 9. In the meantime, Dr. King was on the phone, asking President Lyndon Johnson for National Guard protection and for Congress to do something to pass the Voting Rights Act.

On Tuesday, our ranks had swelled threefold. People of all faiths and colors came from many parts of the country. And there was John, released from the hospital and ready to lead the march with Dr. King. Even bandaged up, John exuded so much courage and determination that he inspired us all. This time, we filled the streets. When we came to the top of the Edmund Pettus Bridge, we saw the same sea of blue uniforms and then came face-to-face with Clark. I felt queasy. Dr. King surveyed the crowd and knelt down to pray. We all knelt down. Many prayed. When Dr. King arose, he turned around and started leading us back over the bridge. Back at Brown Chapel, he revealed that he saw that no federal protection had come to protect us and that God told him it would be another bloodbath.

We continued with more voter registration attempts and planning for a third march — all the way to Montgomery, over five days. On March 21, we accomplished this with approximately 25,000 supporters from across the United States and with my two heroes, the Rev. John Lewis and the Rev. Dr. Martin Luther King Jr., leading us. On Aug. 6, 1965, President Johnson signed the Voting Rights Act into law.

This past July, following John’s death, many were motivated to honor him. In the Senate, 47 Democrats and one Republican reintroduced the Voter Rights Act, under legislation bearing John’s name. Online, a petition to rename the Edmund Pettus Bridge after John was renewed. I hope that both of these movements are successful in commemorating his legacy.

— Doug Parks ’60 is a retired minister in the United Presbyterian Church, U.S.A. He and his wife, Michele, live in Laguna Woods, Calif.