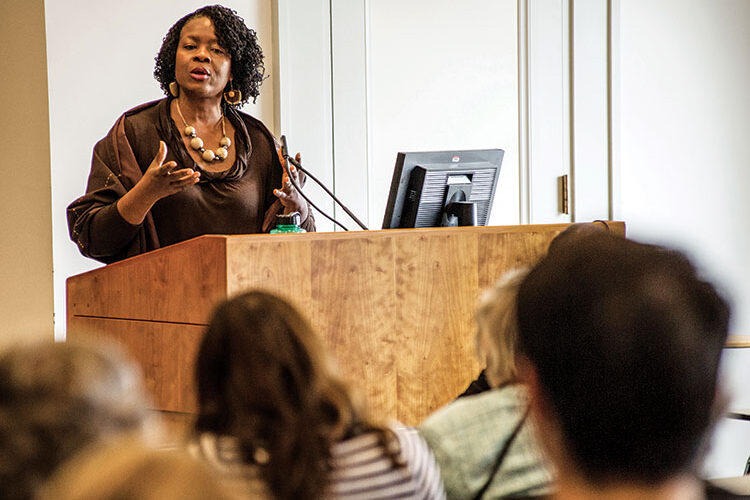 While experiencing daily life in the American global south, Dianne Stewart ’90 became immersed in the real-world meaning of feminism.

In January 1987, I enrolled in my first feminist studies J-term course, The Psychology of Women. The class was taught

by Judith Allen, a young, white, female professor from the psychology department. I can recall rummaging through the Colgate Bookstore to acquire the course texts and wondering what Carol Gilligan’s In a Different Voice: Psychological Theory and Women’s Development would reveal over the ensuing month of study.

I soon discovered that the themes my professor introduced concerning women’s oppression, sexism, and patriarchy simply did not resonate with my Afro-Caribbean immigrant experience. I could not enter the conversation as I noticed my white female classmates nodding in affirmation when their experiences coincided with the theories and narratives we were unpacking during class lectures and discussions. After a few days of intensive reading and reflecting, I decided to approach my professor and explain the dissonance I was experiencing.

I did not grow up internalizing many of the stereotypes we were reviewing about girls’ and women’s limitations based upon their anatomical “difference.” Nor had I been socialized to embrace the feminization of domesticity and the masculinization of the public sphere.

Although my father had a full-time job, he did 98% of the cooking in my household and shouldered most of the other duties typically associated with domestic life. In fact, during my first year at Colgate, when the West Indian Students’ Association held our annual celebration event, my father was the lone dad who drove up from Hartford, Conn., to join an army of Caribbean moms in preparing the food for the main banquet.

I had never received messages in my familial culture that I was inferior to males or that I should assume a subordinate role when interacting with my brothers and other males in my community. In fact, I now know that my working-class African Jamaican cultural heritage, while in no
way immune to patriarchy and sexism, had strong vestiges of West and Central African matricentric traditions.

I felt quite relieved when the professor immediately affirmed my reality and referenced a body of literature by Black feminist scholars who had been framing their studies of sexism, patriarchy, and women’s experience with attention to racism, classism, and the history of slavery and segregation in America. She admitted that the range of materials she assigned aligned with her expertise and encouraged me to explore Black feminist scholarship in my final paper.

While my experience in the course was pleasant enough, I was a bit hesitant to pursue feminist studies after my first-year J-term course because offerings centering on the scholarship of Black feminists and other feminists of color were scant. I did, however, find that Colgate’s philosophy
and religion department was moving in exactly this direction of exposing students to Black feminist and womanist resources. Although I was not a religion major, I took many courses in the department with Professor Josiah Young, who introduced me and other students to African feminist theology, especially the works of Mercy Amba Oduyoye. Professor Young also told us about a new womanist theology that was on the horizon pioneered by Jacqueline Grant. However, it was Professor Marilyn Thie who facilitated my intellectual immersion into feminist thought and praxis. Professor Thie’s expansive pedagogical vision for teaching feminism led her to organize a semester-long study abroad program for students to focus on Latin American feminist theology in Mexico, Nicaragua, and Guatemala during the spring of 1990. As a participant, I not only benefited from experiencing daily life in the cities and rural communities of the American global south, but I was also afforded the opportunity, quite early in my academic career, to decouple feminism from the invisible yet overdetermining modifier “white.”

The significance of this pedagogical experience to my entire trajectory as a womanist scholar with commitments to the wellness and thriving of Black women and Black communities within and beyond the United States cannot be overstated. For months, I was baptized in the epistemic orientation of, for the most part, untutored mothers who were battling structural injustice at multiple levels: imperialism, militarism, low-intensity conflict and other strategies of war, political repression and censorship, disappearances, domestic and intimate violence, inadequate resources, and economic deprivation. On this study abroad program in Mexico, Guatemala, and Nicaragua, the base Christian communities were our classrooms and our teachers were the Mothers of the Disappeared (parents of missing social justice activists who organized themselves to demand political change). Professor Thie created a learning experience for me and my classmates that was only possible through personal risk taking and courageous exploration. This, in turn, allowed us to have a profound sense of the immense risk taking and courageous activism of those who were teaching us that “feminism is accessing clean water for my children,” as Leah, one of our leading teachers, declared during our first class session. Feminism, the mothers taught us, was organizing to eliminate war and violence in their communities, and feminism was dismantling sexist and abusive behaviors of their spouses and male comrades who had often been socialized to adopt and promote toxic masculinity in their dealings with women, children, and even with one another.

My experience in the Latin American Feminist Theology study abroad program became a compass of sorts, directing my path to feminist and womanist study once I entered graduate school and eventually the professoriate. The mothers and other feminist activists we encountered had gifted me a new starting place for constructing liberation theology centered upon women of color. I went on to study theology and culture at Harvard Divinity School and Systematic Theology at Union Theological Seminary in New York. In many respects, they inspired my creative consideration of sources beyond the normative tools of theology when reflecting on African Caribbean and African American women’s religious experience. And as my scholarly focus has broadened beyond a narrow focus on Africana Christian studies to Africana religious studies over the years, I often find myself returning to the lessons learned during my experience in Mexico/Central America under Professor Thie’s pedagogical guidance.

— Dianne M. Stewart ’90 is an Emory University associate professor of religion and African American studies, specializing in African heritage religious cultures in the Caribbean and the Americas. She teaches and produces academic and public scholarship about feminism(s) with the aim of decolonizing women’s, gender, and sexuality studies and teaching/researching womanism within and beyond the confines of theology.

This essay has been excerpted from Women and Religion, Philosophy and Feminism (2019, Colgate University Press), which was edited by Professor Christopher Vecsey. The book is a compilation of talks from the April 2018 symposium by the same name, which honored professors emeritae Marilyn Thie and Wanda Warren Berry. View the talks on Philosophy and Feminism and Feminist and Womanist Religious Thought.