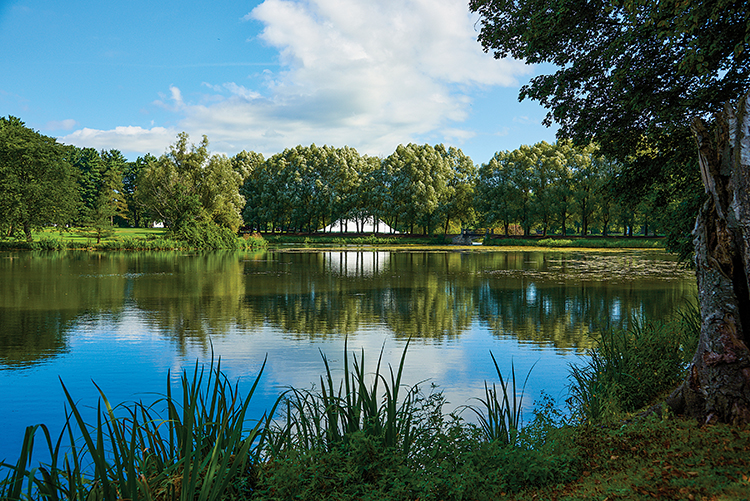 Notes from an Empty Campus

Following increasingly ominous warnings from state and federal agencies regarding the threat of the emerging coronavirus situation, Colgate, like many other colleges and universities, announced to its students that, following the completion of what would have been spring break, classes would move online and students would leave campus.

We took this step after attempting an approach to the virus not seen at other institutions. Specifically, we sought to keep all students here in Hamilton under the belief that such a move might be safer for the community. A string of official pronouncements — the World Health Organization designation of the situation as a pandemic, the governor of New York’s orders to close all public colleges and universities, and the eventual prohibition against gatherings of 50 or more people — made this approach untenable. So, with great sadness, I sent an announcement to the campus telling everyone to begin shutting Colgate down.

We did, however, offer to provide housing to those students who, for many reasons, could not make it home. Some were international students who would not be able to cross closed borders. Others stayed because their home internet would not be sufficient for their online studies. Approximately 300 Colgate students decided to stay behind on the rapidly emptying campus.

By Friday, March 20, Gov. Andrew Cuomo called for all nonessential enterprises to move to remote work. Colgate, while still able to provide essential services to the students on campus, became even quieter as staff and faculty shifted to working from home.

By the weekend of March 21–22, Colgate had become a stunningly quiet place. The following are notes written from campus during this time.

The day after I sent the closure announcement to the campus community, a group of seniors emailed to ask if they could come by the office to say goodbye. More than a dozen came. Social distancing rules were not yet in play, so the seniors piled on the sofa in the office, or jammed two to an armchair. I rolled my desk chair over to sit in the newly created circle.

As the students talked, there was some crying, but mostly it was a room filled with laughter and campus gossip. We began to share a kind of familiarity.

The period from spring break to commencement is usually a time of a loosening, an unwinding for the senior class. There is a new openness, a giddiness to the soon-to-be graduates. They want to talk all the time — as much to administrators and faculty as to each other. They tell us that they were young here, and did silly things, but that they are past that now. They do much the same with each other those weeks, and they move in new, larger groups. By the end, old grudges have fallen away, and new friendships are made.

I realize, in my office with students piled on top of each other, that, in addition to the formal ceremonies of commencement and baccalaureate, this, too, was taken from them. But somehow, they know to take this approach now, to speak loosely and comfortably about their time at Colgate and to let me know what it meant to them. They leave the office, and I go home.

It is rare for me to stop by the Colgate Bookstore. It’s a feature of my job that an endless stream of Colgate gear comes into the office, almost on a daily basis. It would be possible, if I were to choose this route, for me to wear Colgate T-shirts and sweatshirts every day for several months without ever repeating any article of clothing. So why go to the T-shirt section of the bookstore? I saw a Colgate shirt on a colleague, and I liked it, so I stopped by the bookstore two days after the closing announcement.

The bookstore was jammed, and it was jammed with seniors. Usually, on typical commencement weekends, it is the parents who flood the bookstore — buying class banners, mugs, and sweatshirts. Every year, the graduating seniors act mortified by their parents’ spending sprees, but they shrug at the inevitability of it all.

This year, it was the students taking up this task. Their shopping bags were filled up with Colgate gear. They became tourists to their own last days at Colgate, more committed to the shopping than their parents ever would be.

Usually on the first Monday of spring break, the campus is quiet, but it is an easy quiet. The “spring” term at Colgate begins in late January, in the snow. By March, we have been cooped up inside for months and everyone needs a break. So, spring break relieves the campus.

In an ordinary year, the typical first day of spring break sees deans wearing casual clothes and talking on the pathways. They have fewer meetings now with school out of session. The facilities workers are clearing leaves out of planting beds. The campus has a quiet and happy hum about it.

This year, the first morning of what would have been spring break has a stunned sort of silence — an eerie quiet, like a movie set. This is not spring break, it’s something else. And no one quite knows what to do with it.

On commencement morning, students are in robes, surrounded by their families. Everyone is taking pictures. So when I see students, our official goodbyes are rushed. The graduates have to go meet their fathers back in their dorm room, or they have to get their grandmothers to the car. The quick goodbyes are part of the day, and they are easy, if poignant. The graduates are going off to their lives, and they are excited, so our goodbyes are a kind of happy salute to them.

My goodbye with one senior, Eli, missed those qualities this year. Eli has worked in the admission office for a few years, in the same building where the Office of the President is located. So I see him whenever I leave my office to go to lunch or a meeting. We have developed an easy, teasing relationship over the years, and I always like seeing him. He is a member of this Class of 2020, the class I arrived with. So, he’s been part of what I have always thought of as “my class.”

As he was leaving campus after the closure announcement, he had come into the admission office to say goodbye to his coworkers. He wasn’t expecting to see me that day as he was rushing about. I, too, was surprised to see him and saddened to realize he was saying goodbye. I shook his hand and wished him well. As I walked out, I wished we had the next few weeks to really say goodbye, and I wished my last handshake with him was with both of us wearing academic robes. He deserved that. As I left the building, I started composing a letter to his class in my head.

I used to live in the woods on Colgate’s campus. The president’s house, Raab House (formerly Watson House), was built in the 1960s, during a time when most college presidents didn’t wish to live in the middle of things. So, Raab House was built above the campus, past the observatory, behind a line of trees, and, presumably, away from students. My first year at Colgate, the house felt far away. But with the recent completion of the new Burke and Jane Pinchin halls, which jut out toward Raab House, I now live, essentially, in a quad.

I wake up early to swim most days, and I can see the few lonely lights of students pulling all-nighters, especially during midterms and finals. That’s a poignant sort of quiet light.

Then there are early Friday evenings when every residence hall room is lit up. You can hear music from the open windows. The students, done with classes for the week, are planning their weekends and their adventures. The lights are never brighter.

Now the few lights glowing in the residence hall windows seem like beacons, messages from the few students who have stayed on campus — like lighthouses signaling each other.

In the early 20th century, as large numbers of students were off to colleges for the first time, the American college novel emerged. They are tales of young men (it was almost always young men) who find themselves on a fancy campus and have to learn the mores of a strange new environment.

Nearly every example of these novels has a “night walking scene,” in which the protagonist, having suffered some defeat, walks the campus alone at night. Drenched in despair and under soft moonlight, the young man first licks his wounds, but then recommits himself to the values of the college and determines to do better in the next years.

In one of the most celebrated of the college novels, F. Scott Fitzgerald’s This Side of Paradise, Amory Blaine goes into the night after some failure, and he falls for the gothic spires of Princeton. Another of these popular novels, Stover at Yale, has the scene in which Stover, alone on the campus at night, recommits himself to striving for collegiate success.

I take my dog, Emrys, on evening walks on campus and, usually, these are moments when I meet students. They miss their own dogs, so they come up to say hello to Emrys. And, after a few moments, they talk about the campus. It’s perhaps the best part of any day for me.

My walks on the campus are profoundly quiet now. It’s now me on the “night walking scene.” And like Amory and Stover before me, I see the old buildings and the old trees, and I think of the year. And, like them, I think about the future. It’s time to recommit.

A common critique of American campuses is that they are “bubbles,” unreal playgrounds. They even look unlike any other part of the American built environment, with towers, cupolas, and stone buildings arranged in courtyards.

Students always speak of the Colgate bubble, and by that, they mean it is an unnatural world in which “real-life” concerns and tribulations are artificially kept at bay. This critique almost always leads to a call to “burst the bubble” — to expose students to real-world concerns.

I have always thought those sorts of sentiments confusing or mistaken. Shouldn’t the campus be a place apart, a place with a different set of rules and concerns?

The coronavirus is a major bursting of the bubble of this campus, and no one is happy about it.

When we are through this, I suspect we will not quite be the bubble we were before. But we will remain so in some meaningful way. I think we’ll cherish more intensely the ways campuses are a place apart.

We’ll need that of Colgate. Its beauty, long a thing that set it apart, will be more important than ever.

For those of us who work on campuses, there’s always one morning in August when it hits you: The school year is about to begin. After the students being away, you can feel the rumble of the year about to begin. The campus is suddenly awake, alert, and expectant. And, on that morning, you want it all back: the drama, the noise, and the lights. You want sports teams on fields and students walking to class. All of it.

When that day next comes for Colgate, I know how the campus will feel. The facilities workers will be preparing the welcome tents, and faculty will be heading to their offices to prepare for their classes. Even the campus trees will seem excited. I have a strong suspicion that morning will be among the happiest moments of my life. Of all our lives.

And it will come.

The lights will blaze, the teams will play, and the professors will teach. And Colgate will be Colgate once more.