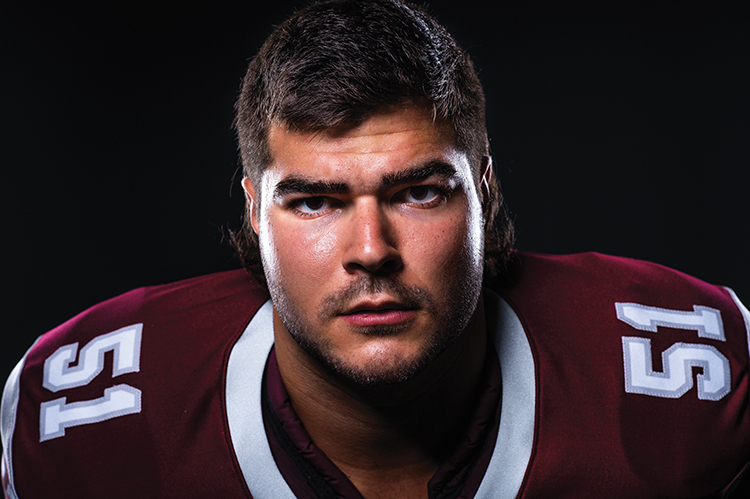 The unofficial motto of Colgate’s football team is “attitude and effort” — a perspective Andrew Jaworski ’21 has emulated in other aspects of his life. On the field, the 230-pound, 6-foot-1-inch linebacker fights against a wave of 300-pound offensive linemen, providing extra protection for the goal line. In the classroom, the political science major puts his head down and fights through long study sessions, each achievement a stride toward a law career. And this past summer, he showed up to local government offices to fight against climate change through a research project with Colgate’s Upstate Institute. See what makes the scholar-athlete run:

Writing resolutions for the Village and Town of Hamilton to become a greener place is how Jaworski spent his summer. The impetus of his project was to tick off boxes on the checklist that helps Hamilton attain its Climate Smart Communities Certification. A sampling of his resolutions includes: “Promotion of Shaded Areas in Public Spaces” and “Recycle Bins in Village Buildings.” He also collected data on aspects like the number of LED street lights compared to non-LED ones, focusing on how each affects electricity bills. “Anything we can do to make the communities smarter and safer in terms of climate control is beneficial,” Jaworski says.

After researching ways to make Hamilton sustainable, he spent his evenings in Huntington Gymnasium preparing for the season. It’s the first fall during which he’ll have a chance at game time — something he’s been working toward since committing to Colgate. “He’s one of our more physical players and someone who really showed that we can trust him in a game,” Coach Dan Hunt said.

Jaworski wanted to explore different avenues in his political science major, so he chose his research project to see how governments operate. His favorite class so far? Politics and Moral Vision with Professor Barry Shain. “It was one of my toughest classes, but I learned a lot in terms of understanding politics and government today. It also helped me decide my major,” Jaworski says. Last semester, he also took the course Congress with political science professor Michael Hayes, in which he studied the history and structure of the legislative body.