How I Became an Entrepreneur 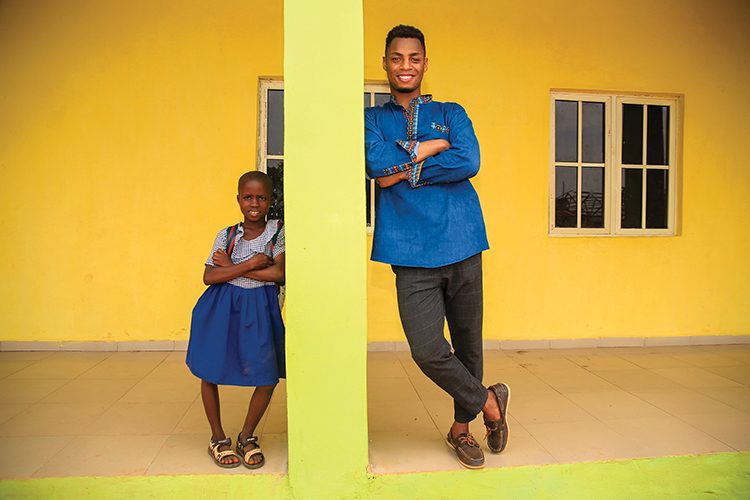 In the clothing line NaSo, each item sports a name from the Nigerian language Edo. The Oba, an evergreen shirt with a mint and orange print, means “chief”; Iyoba, a powder-blue tank dress with a swatch of black, white, orange, and teal print down the side means “beautiful”; a stark black jumpsuit — with a subtle red, yellow, and white print contouring the side — named Omose means “strong woman.”

At the end of 2018, he sold the first 300 pieces of the collection through Kickstarter, earning $45,000. Approximately 60 percent of the proceeds went to the renovation of a Nigerian school in his father’s hometown. As part of his mission to give back to his family’s home country, the clothing and school renovations were made by Nigerians.

In April, NaSo won first place in the 2019 New York Business Plan competition. Having just graduated, Omorogbe plans to continue with his company full time, working on NaSo’s go-to-market plan and raising money to fund additional inventory made in Nigeria. This summer, he’ll work out of the incubator; Omorogbe was accepted by Colgate’s Entrepreneur’s Fund, giving NaSo an additional $10,000.  It’s the “full start-up experience,” he says.

Here’s Omorogbe on how he became an entrepreneur and philanthropist:

The problem with most African-inspired clothes is that they’re either too traditional or they’re oversaturated with vibrant prints, which limits the versatility of the clothing. I came to TIA with the idea of creating African-inspired clothing that was minimalist, that people could wear anywhere.

My first year at TIA was focused on building and designing the product. The summer after my junior year, I went to Nigeria to see if the clothing could be made there — to give back to the community in that way [and because] there are a lot of talented tailors there.

While I was in Nigeria, I wanted to see where my father grew up. Urhokuosa is this remote, rural village. I was looking at the house my father grew up in, and I heard children’s laughter. I followed those voices, and they ended up coming from a school. When I got there, I was shocked at what I saw — a place with no desks, windows, or chairs. Giant holes were across the ceiling, so when it rained heavily, class would have to end early because the kids would be wet and cold. I saw my dad in all of them because he went to the same school.

The most important part about economics [which was my major] is the critical-thinking component: how to dissect a problem, break it down into digestible pieces, and then execute a solution. I wanted to sell enough NaSo products so that I could renovate that school. So, I came back to the United States with samples made by tailors, and I filmed a Kickstarter video. People really liked the product and the story. We ended up doing more than $45,000 worth of sales in just 30 days, and we rebuilt that school in March. The kids are going there as we speak.

When our customers wear our products, we want them to have a feeling of empowerment, a feeling that makes them think, ‘well done,’ or as we say in Nigeria, ‘NaSo.’