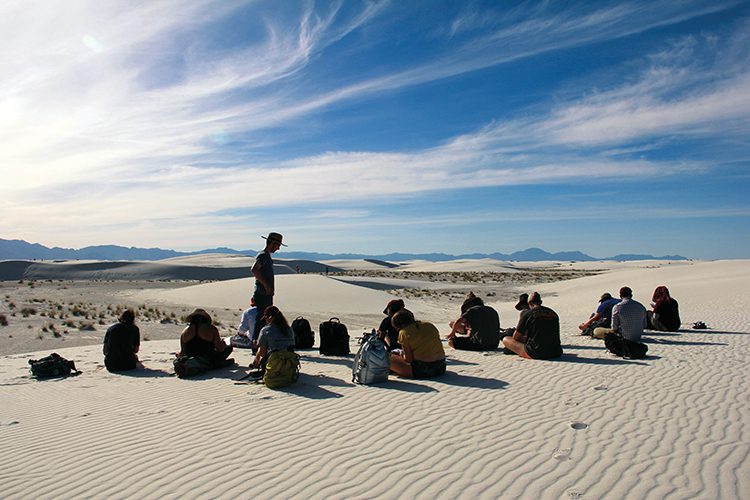 Imagine seeing two and a half billion years of the Earth’s history in only 18 days. That’s what Professor Joe Levy and 16 students did when they drove across the United States in May. The trip was the basis for Geology 120: Cataclysms in America’s Parks, which focused on mass extinctions, meteorite impacts, floods, and volcanoes. Grab your map and follow along as Levy provides trip highlights: Lake Erie, Dunkirk, N.Y. On the shores of Lake Erie, students examined oily shales that were formed approximately 350 million years ago during the Devonian mass extinction. Our trip was powered by fossil fuels, so I wanted the class to reach out and sniff the rocks that would keep us going on this adventure. The carbon in those shales came at great cost to life on Earth. It’s about the only upside to mass extinction.

Buffalo National Scenic River, Ark.
A canoe-based hydrology experience, we saw how erosion has revealed the inner workings of geological features by cutting through solid rock. The Ozarks in May are breathtaking but stormy. We got caught in a thunderstorm and had to take shelter on a sandbar. The storm meant we could see the river at close-to-flood stage.

Guadalupe Mountains, Texas, and Carlsbad Caverns, N.M. Approximately 250 million years ago, you would have had to dive 2,000 feet to examine the same coral island that is now easily accessible in the Guadalupe Mountains. Learning to immerse yourself in an environment that is long gone is one of the most amazing feats of geology. You get to be a space-time tourist by reading the environmental clues trapped in the rock.

The caverns are nearby, and they are actually from the same era and the same rock as the fossil reef. One was carved out by groundwater to make the caves, and the other is standing in the desert.

White Sands National Monument, N.M. We wandered out into the dune field, a maze of white and tan wrinkles. By looking at an aerial photo, you can see the road through the monument. One student asked, “How did they decide where to build the road through the park? Aren’t they worried that the dunes will cover it?” I said, “Hold that thought,” because after a two-minute drive, we reached a place where the dunes were pouring across the road. They use snowplows to move them.

Flagstaff, Ariz. Visiting Sunset Crater National Monument, we walked on lava. Some flows were up to a million years old, while others erupted only in the last few thousand years. The lava pours across the sandstones that run from central Arizona all the way up to the Grand Canyon. The lava bakes the underlying rock and provides the volcanic icing to a sandstone cake hundreds of feet thick. Sedona, Ariz.
Here we encountered our first truly photogenic sandstones — layer after layer of rock built out of dunes frozen in time. The layers of sand look tilted, but they’re not. They’re the sloping downwind sides of ancient dunes, marching across a 275 million-year-old desert plain. Grand Falls of the Little Colorado, Flagstaff, Ariz. A waterfall on the Navajo Reservation is a huge draw in the wet season; we were there in the dry season. The tourists were disappointed that the falls weren’t flowing, but we weren’t. It was the perfect time of year for geology. In the past, lava flows from the Flagstaff-area volcanoes flooded into the canyon and dammed up the river. The river then cut through the sandstone and the lava rock and eventually flowed down into the Grand Canyon. You can see this battle between water and fire playing out in the falls’ history. Even in the dry season, there’s evidence of the roaring river in the swimming pool–sized potholes at the bottom of the gorge.

Grand Canyon National Park, Ariz.   An obligatory stop for any geology group in the Southwest, students were surprised to wake up to snow here. A few inches of fresh powder in the middle of May was a taste of Hamilton.

Lake Powell, Ariz.
At this site of one of the largest hydroelectric dams in the United States, we viewed layers of sedimentary rock along the shores of the lake via boat. These layers are the same former sand dunes we glimpsed at the Grand Canyon and Sedona, but now we could almost reach out and touch them from the boat. Mesa Verde National Park, Colo. The early Pueblo people built stone villages hidden beneath sandstone overhangs here just 1,500 years ago. They eventually had to abandon their cities because the climate changed. It’s a millennium-old cautionary tale about not becoming too reliant on local resources. Walking through the canyon to Petroglyph Point was a neat opportunity to touch ax-carved boulders that were being hewn out a thousand years ago.

Ouray, Colo. The final stop took the class up through the San Juan mountains and down underground into a former gold and zinc mine. We learned about mining history and tried some mining methods firsthand. The roads we drove on were old mule trails cut into the sides of sheer gorges. Along the road, we could reach out toward the Great Unconformity — a 1.8 billion-year-old gap in Earth’s life story that peeks out of the landscape from Durango clear down to Las Vegas. Meeting local mine history enthusiasts gave us a chance to weigh the costs of using Earth’s resources and the risks of acid mine drainage. Many of our geology department alumni go out into the world as environmental consultants to help restore national treasures like the San Juans, so that they can be enjoyed by future generations. It