Uniting Sound, Silence, and the Screen 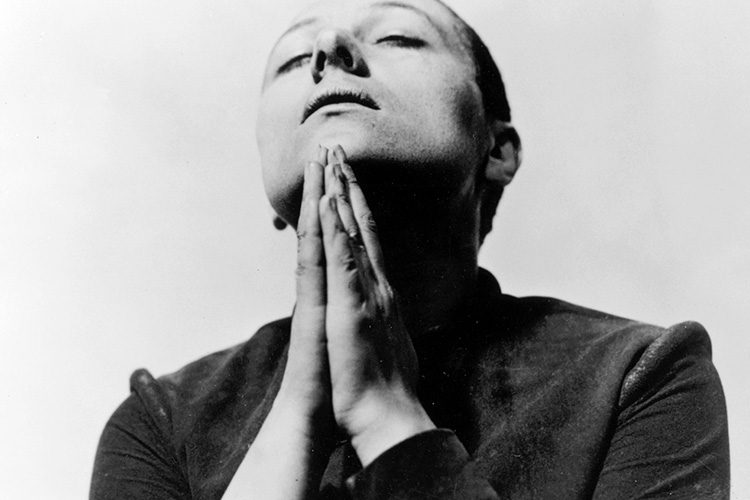 The Memorial Chapel lights dimmed and a film began to play. On screen, cloaked clergymen screamed silently at a wide-eyed Joan of Arc as she bravely faced their accusations of heresy. On stage, the Colgate University Chorus, accompanied by a visiting orchestra, brought color to the haunting black and white scenes.

On Dec. 7, chorus director Ryan Endris conducted composer Richard Einhorn’s Voices of Light, an opera/oratio inspired by and performed in conjunction with Carl Theodor Dreyer’s 1928 silent film The Passion of Joan of Arc.

With more than 250 performances worldwide so far, Einhorn’s multimedia event has sold out the likes of the Sydney Opera House, the David Geffen Hall at the Lincoln Center, and the Kennedy Center.

Colgate’s performance featured more than 90 members of the University Chorus, who intoned the writings of medieval female mystics Christine de Pizan, Hildegard von Bingen, and others while Joan faced her impending death on screen.

While Endris typically focuses solely on the music, this unusual event required him to study the film itself and fill his score with visual cues. “In a sense, it had to become muscle memory,” Endris says. “I had to watch the film carefully while also making sure all the performers knew when to enter and maintaining the right dynamics. It might have been the most mentally challenging conducting experience I’ve had to date.”

Justine Hu ’21, one of the more than 600 audience members, attended a lecture by Einhorn earlier in the day and thought his explanations allowed her to appreciate fully the complexity of the performance. “I was very impressed by the torture scene, particularly the intensity of the choir in contrast with the soloists,” Hu says. “The juxtaposition of the old film with the University choir, orchestra, and soloists created an extremely layered and enjoyable experience.”

As Joan of Arc herself might have said, their performance would suggest that they were “born to do this.”