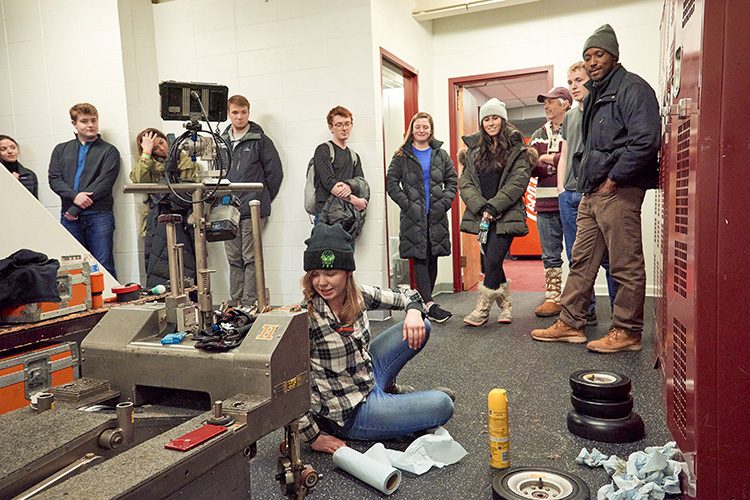 Colgate once again served as a movie location when producers with deep ties to the University shot a feature-length hockey film on campus.

Grant Slater ’91, his brother, Todd, and friend Jonathan Black of Slater Brothers Entertainment decided to film Bill Keenan’s hockey memoir, Odd Man Rush, at Colgate and other nearby spots because of a rural landscape that resembles Swedish locations in the book — and because of their affinity for the region.

The Slater brothers’ long-standing bond with Colgate dates back to 1977, when their father, Terry Slater, first took the reins as head coach of the men’s hockey team, leading the Raiders to compete in the 1990 national finals.

“We knew we needed an elite institution like Colgate, and we needed arenas that paralleled the level of play you see in Europe,” says Grant, who played hockey for Colgate and later went on to play in Sweden.

It also didn’t hurt that one of the locations, an old locker room in Colgate’s Reid Athletic Center, was used in the filming of the legendary hockey comedy Slap Shot, starring Paul Newman.

To assist with the major undertaking, the producers enlisted the help of more than 20 student interns recruited by Colgate’s Office of Career Services and the University’s Film and Media Studies program.

The part-time experience also included working sessions with the filmmakers, select readings, an optional script-writing workshop, and ultimately a final exam about their work.

“This internship has challenged me to be creative, to think from multiple perspectives, to immerse myself in unfamiliar environments, and to step out of my comfort zone,” says Amanda Capra ’21, a marketing and production intern.

Luke Jeramaz ’21 agrees. “I have been able to experience the ins and outs of producing a multimillion-dollar film, which will serve me well in the film industry after graduation,” he says. The last day of filming wrapped up Feb. 28, and the producers are aiming for a winter 2020 distribution. But, before that, the Slater brothers will be back in town for the annual Hamilton International Film Festival, July 22–28.

“Eleven years ago, when we started the film festival, part of the idea was to bring more arts and culture to this area,” Todd says. “To go through that process, and now to make a terrific movie here … it’s been incredible.”