Bringing Their A Game to NCAA 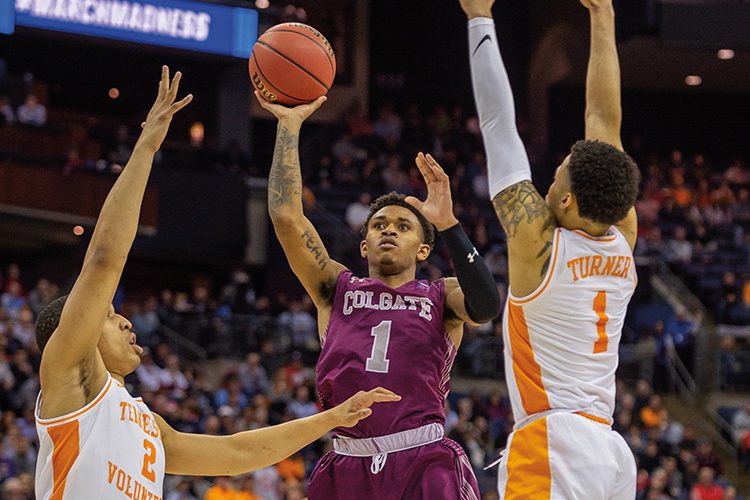 It was the first time in 23 years, and the Raiders didn’t disappoint. Men’s basketball made it to the NCAA Tournament, taking on the Tennessee Volunteers on March 22 in Columbus, Ohio.

No. 15 seed Colgate was the underdog against No. 2 Tennessee. But in the nail-biter of a game, the Raiders held their own until the end — which concluded with a 77–70 loss to the Vols.

“As the game got tight, I thought Tennessee managed it really well,” Head Coach Matt Langel says. “For the most part, we got to show what we can do.”

The Raiders made 15 of their 29 shots from a long range. Jordan Burns ’21 alone made eight three-pointers — a career high and just one shy of a program record for a single game, which was set by Tucker Neale ’95 in 1994. Neale was one of the 500 Colgate fans at Nationwide Arena in Columbus.

Also at the game were Burns’s family. “I knew Jordan would come out and play with all his heart and all his might for his team, but I never imagined he would do what he did on that stage,” his mom, Arenda Burns, told Syracuse.com.

One of the Raiders’ other star players, Rapolas Ivanauskas ’21, caught a tough break when he had to sit out the second half due to eye problems. The Patriot League Player of the Year, he was also Colgate’s leading scorer this year at 16.4 points per game.

For the seniors on the team, Langel told them in the locker room: “You should be really proud of the program you’ve helped build.”

The Raiders finished their season with 24 wins — 13 league wins — which were the most in program history.