A Round of Sudden-Death Questions for Carly Turro ’09 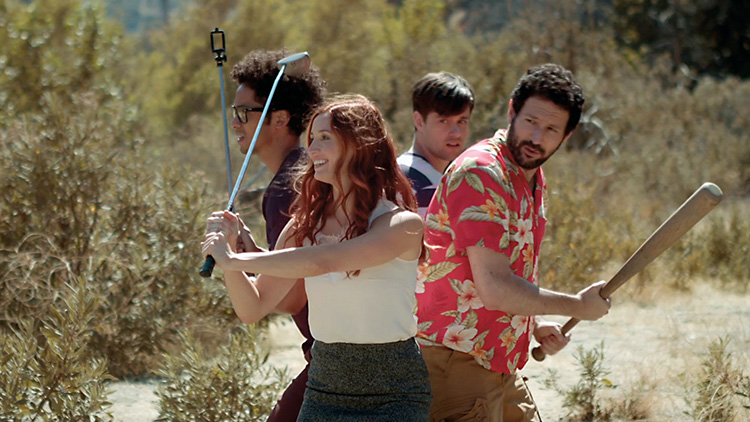 Carly Turro wishes she wasn’t locked in an underground bunker, but with the recent zombie apocalypse, she’s going to have to make it work.

At least it’s just for TV.

The snappy redhead is the star of Bunkheads, a new series on Amazon Prime about four strangers trapped in a bunker during a zombie outbreak.

Previously, Turro scored a spot on Homeland. She’s currently co-developing a feature film titled How to Meet People. And Turro will next appear in Blood Puppet! Christmas ’94, which will be hitting the film festival circuit this year.

While keeping the blood-thirsty zombies at bay, Turro took five to answer five:

The zombie apocalypse is really happening. How do you react?

In the show, there’s a character who’s very into fitness, so he’s constantly exercising to stay in shape. If it were me, I would probably join him on those workouts, [but I’d eventually get restless] and be like, “We’ve been down here long enough. Let’s get out there and see what we can do.”

How did you get into the acting scene after graduation?

I was a bio major, and I got a job at Memorial Sloan Kettering Cancer Center in New York. I was studying for the MCAT, and I was really stressing myself out. I realized that in med school and practicing medicine, it doesn’t get less stressful. I was going to set myself up to burn out.

[At the same time], my father passed away. He had made a point to live life to the fullest. It got me thinking, “Why limit myself?”

I took acting classes and wanted to do a 180 and pursue acting.

What are you working on besides Bunkheads?

I produced a couple of shorts that were great learning experiences. I got into a couple of small festivals. I’m also writing a feature film with a friend, so we Skype with each other and write pages and email them back and forth. It’s very 2019.

How did you land your role in Bunkheads?

I read about the show and the part, and the way they described the show [had me thinking], “This is my kind of humor.” I don’t often get attached to characters, especially in a first read or audition, but I read this one and said, “This was written for me.”

Playing your character, Dani, did you realize anything about yourself?

I had a line: “We just have to think of something else!” I realized I said the exact same line in another movie I had just shot. There’s something about these characters I play — they might screw up, and their ideas might not work, but they keep trying. I think that’s something very human and that I relate to.