The Elements of Oliver Harris ’19 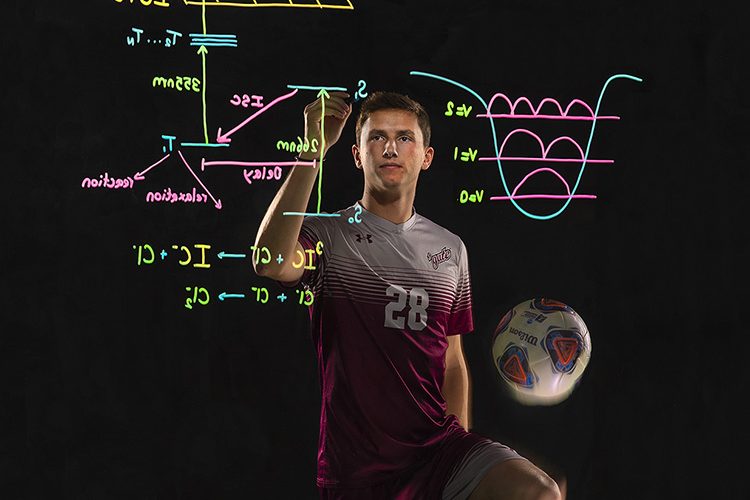 He and his soccer teammates had fought hard to beat the University of New Hampshire 1–0 in the first round of the 2018 NCAA tournament Nov. 15. That night, they piled onto the bus for the six-hour ride home. But Oliver Harris’s day wasn’t over; he had to prep for his computational mathematics test the next morning. So, he studied on the bus, fell into bed at 4 a.m., and awoke at 8 a.m. to take the test before leaving that afternoon for the Wake Forest game. “You just have to balance,” Harris says in his characteristically casual way. The senior captain from Chappaqua, N.Y., has done well balancing his athletic and academic responsibilities, making both the Raider Academic Honor Roll and Patriot League Academic Honor Roll every year since he’s been at Colgate. Here are some of the elements that make up Harris, a chemistry major and applied math minor:

Modeling marine particles and studying their global effects on climate change is the focus of Harris’s senior research. Working with Professor Ephraim Woods, Harris artificially creates particles that represent what would come off of ocean spray. “By doing that in a controlled environment, we’re able to treat them to other chemicals or molecules and put them in certain environments we think are being caused by humans,” Harris says.

The decision to major in chemistry and minor in applied math was a switch from Harris’s original plan to double major in chemistry and math. “I quickly found that the theoretical side of math was not for me,” he recalls. Fortunately, the applied math major and minor had become an option at Colgate in recent years, so he made the change. His two disciplines complement each other, Harris explains. “In order to understand the concepts in high-level physical chemistry, you have to understand the math behind them. It’s almost like a new language you have to learn.”

He was Most Valuable Player of the 2018 Patriot League Tournament, which the Raiders won for the third year in a row and are the only team in the league to ever do so. Harris had two assists and two goals in this year’s tournament.

He scored the game-winning goal against Holy Cross in the 2017 Patriot League Tournament. “It went through two people’s legs to go into the goal,” Harris recalls. “It was so lucky. My dad called it destiny.”

Averaging 8 to 10 miles a game, the midfielder estimates that he ran 250 miles this season. “As a math and chemistry nerd, I like numbers,” Harris says. Tallying miles is one reason he appreciates the harnesses they wear, but also, the devices help with game strategy, showing a heat index of players on the field.

His Colgate legacy parents are Christopher ’87 and Louise (Richardson) Harris ’87. Christopher, having also been a Colgate soccer player, was naturally Oliver’s first coach from the time his son started playing at age 4. Louise was a member of the crew team, and as a biochemistry major, passed her science aptitude on to her son.

The future presents two options for Harris. At press time, he was waiting to hear back from graduate schools he applied to — with the goal of pursuing a PhD in environmental chemistry — and the professional soccer teams for which he’d tried out. “I’ll either be studying chemistry or playing soccer — the two things I love to do.”