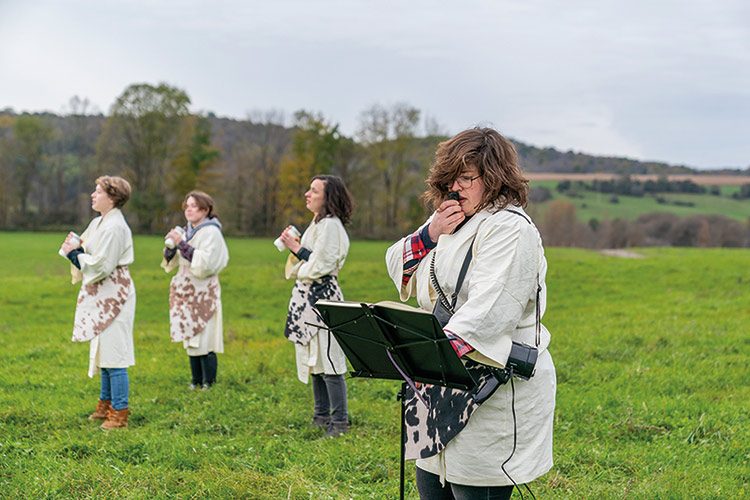 Artist-in-residence Jessica Posner gazes sternly under the bright Picker Gallery lights. Elaborate curls, red lipstick, and dark lashes give her a sense of glamour, even as she stands in nude Spanx in front of an eagerly buzzing crowd. Her voice cuts through the air and silence falls.

“She’s got a hot body,” Posner declares, “but, she has a butterface.”

Posner begins molding sticks of butter in her hands before sculpting them onto her face. Her hair serves as scaffolding to hold the butter mask in place, which leaves her breathing strained. Chunks of butter fall to the ground, revealing smudged eye makeup and blood-like lipstick as the melted butter leaves an almost violent mark. Her body suit is streaked with oily lines.

Posner’s live performance of “Butterface” marked the Sept. 19 opening of the Picker Art Gallery’s Embodied exhibition, which addressed sociopolitical meanings of the body. Posner says, as a larger woman, she often received compliments for having a “pretty face” as consolation for her body. In finding this was a shared experience among other women, she wanted to combine that slight with the insult “butterface,” which is slang for women with appealing bodies but an ugly face.

Since 2013, Posner has been working with butter as a material way of understanding the body. Combining her background in avant-garde performance art with research on how butter has been vilified in American culture just as body fat has been, she sought to develop a performance that addressed the judgment around the materiality of bodies.

“[Putting] ten to fifteen pounds of butter on your face while wearing Spanx leads to thinking about the relationships between the objectification, sexualization, and judgment on women’s bodies and also thinking about the sculpting we do to ourselves,” Posner says.

This live performance of “Butterface” was part of a series titled “The Body Butter Politic,” which included a 40-minute film where Posner agitates cream until it eventually forms butter — a metaphor for the way political change happens, first with agitation and then with solidarity among people.

At Colgate, Posner gathered participants for a new performance, titled “Mother.” On Oct. 20, in Huntington Gym, the performers began by taking turns shaking clear jars of heavy cream to make butter; the sound of the solidifying liquid was amplified in the room. Posner first spoke into a loudspeaker on the politicization of the body, before joining the performers as they contorted themselves and chanted criticisms of their bodies. Once it was finished, she led the audience in a meditation on believing that one deserves to be happy.

Later in the month, a butter-making workshop involved more students, and another performance of “Mother” took place at a cow pasture on nearby Kriemhild Dairy Farms.

“It felt uplifting to commune in the place where butter comes from while doing feminist art,” says visiting French professor Amanda Lee, who was one of the performers.

Posner hopes the framework of “Mother” will be implemented among activist groups, allowing them to portray political messages through bodily interpretations.

Watch a video of Posner’s work at Colgate here.