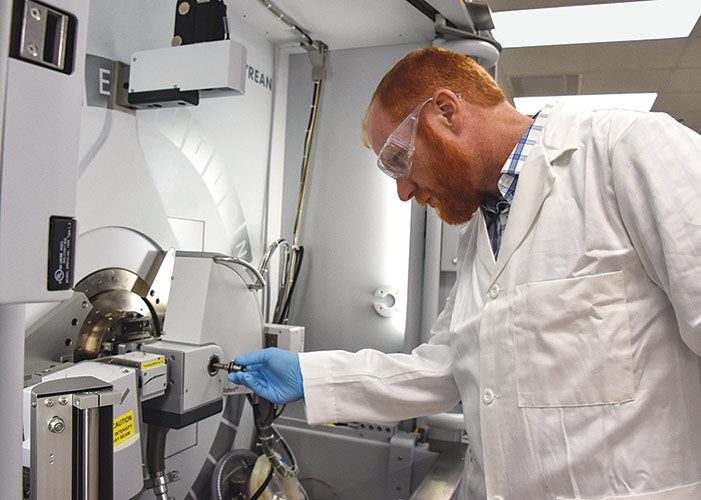 Millions of years ago, the earth was completely molten, a roiling ocean of hot magma that only gradually cooled to rock. As it did, various elements — aluminum, iron, silicon, and other metals — crystalized into the familiar minerals we know today. “All of the elements we use in our technology come from the minerals in earth’s crust,” says Marc Michel ’98. “We rely on them for all aspects of our modern existence.”

An assistant professor of geosciences at Virginia Tech, Michel has worked to replicate the earth’s crystallization processes — albeit on an extremely accelerated timescale — to create brand-new synthetic minerals. “By understanding and controlling crystallization, we can put together atoms in new ways,” he says. Last fall, he received a $560,000 grant from the National Science Foundation (NSF) to explore crystallization of tiny nanoparticles that could be used in applications ranging from environmental cleanup to medical treatments.

Michel graduated from Colgate with a geology degree, but also minored in art, which has proven to be useful in his crystal design career. “A lot of my research has an artistic component to it,” he says. While earning his master’s at Stony Brook University, he worked in a lab doing “hard core crystallization,” taking the results to the giant synchrotron at nearby Brookhaven National Laboratory to examine them under the intense spectrum of light. Michel was hooked, staying to earn a PhD. He began focusing on nanoparticles, a 10,000th to a millionth of a millimeter in size, sometimes consisting of just a few atoms. At that size, solids have vastly different properties. For example, some nanocrystals can soak up pollutants, absorb humidity, transmit electricity, or insulate tiny wires, depending on their size and shape.

Michel is currently exploring a new way to grow crystals by sticking nanoparticles together. His NSF-funded research will examine these processes in aluminosilicate crystals that consist of aluminum, silicon, and oxygen — some of the most common materials on earth — in an effort to develop nanoparticles with unique new properties.

To aid in that process, Michel has used 3-D printing to make new reactors to build crystals. The size of a coffee cup, the reactors are constructed from a transparent resin with inputs for injecting chemicals and for stirring to create reactions. By varying the concentration of chemicals and injection rate, scientists can change the crystals ultimately formed. Michel describes how to create the reactors in a paper published last September in Applied Geochemistry. Creating them through 3-D printing can decrease the cost and allow for rapid tweaking of designs.

His hope is that disseminating such techniques can increase the rate of producing breakthrough new crystals with new applications to change the world. “A community of people working toward that common goal will ultimately build a base of knowledge that makes a contribution well beyond individual groups.”